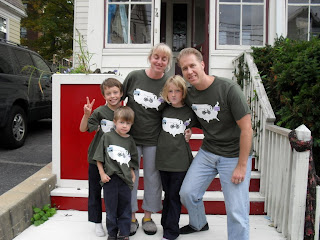 Today's Photo: Our son Hank, his wife Heather, and their kids - Owen, Jonah and Carina. At the end of our trip when we arrived to see them they were wearing these shirts, which Heather had designed and ordered. On the back they say: "Riley and Becky's Excellent Adventure Pedaling to Portland 2010," followed by a month-by-month listing of all the places we spent the night the entire trip!

Just the Basics: As Cousin Steve has pointed out to us, we're a bit slow in getting back to finishing this story - true fact! But we intend to do it. Our ride ended on October 13th and we then spent about two weeks visiting family in Boston and Ohio, and getting back to our home in Richland, WA, arriving home on Friday, 10/29. A big chunk of our trip home was on the train from Chicago to Portland and we had a great time. Much of the way we were reprising our trip - Amtrak was a regular companion, especially in Montana and North Dakota. We even had snow in North Dakota and each managed to get the other with a snowball when we got out to stretch our legs in Minot, ND.

As you can imagine - we've been busy since we got home! Of course we have been dealing with mail and computers and house cleaning and unpacking (we had a tenant while we were away so had more unpacking and such than you might imagine), et cetera, et cetera, et cetera. In addition, we spent much of three afternoons before the election (10/31 and 11/1 and 2) doing door-to-door canvassing for the senatorial candidate of our choice ---- I know, we're nuts!

We've also been having fun, of course! On the 5th we attended a local little theater production of Bell, Book and Candle. = ) = )
Riley has reassembled our bikes, which we shipped home from Maine, and we've been for three early morning "breakfast rides." The first such ride was to our favorite bagel place - Some Bagels. On the way home, after riding more than 4000 miles without an accident, Becky took a fall. Something caused her chain to slip off and she was freewheeling as she turned a corner to start up a steep little hill and down she went before she could unclip a pedal and put her foot down. Very embarrassing, but it appears there was no serious damage - just a couple of bumped knees.

The next two rides were to a favorite spot for breakfast picnics along the Columbia River bike trail. We had the same type of breakfast we often eat there in the summer - yogurt, with frozen blueberries and granola, and, of course, coffee. It's already pretty cold and we wished we could have had nice hot oatmeal instead - Becky actually ate with her gloves on the first day. So . . . Riley has created a hot oatmeal carrier for us. He bought a new gallon paint can and lined it with foam and a piece of plastic cut from one of our flexible cutting boards, and our two lidded camping bowls just fit nicely into it. Tomorrow morning we're making old fashioned oatmeal with raisins and walnuts and trying it out! The container fits snugly into one of Riley's panniers and will stay upright . . . we think it will work!

Today Riley got our desktop computers fully up and functioning - there were major problems with our cable service and an elderly router - so tomorrow Becky will be back to editing the blog. As she works she's tracking things like the gifts we received, the reasons we took layover days, and so on - some of that data will make it into our final "report." There are lots of other things demanding her attention, of course, so it may be a couple of weeks before that "final post."
Posted by Riley and Becky at 9:16 PM