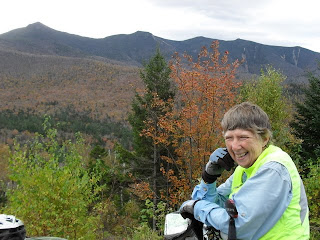 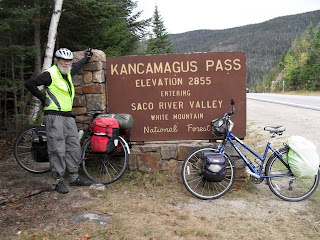 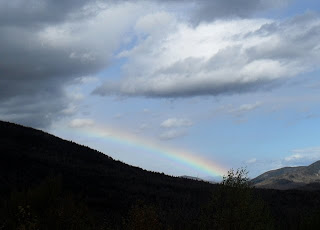 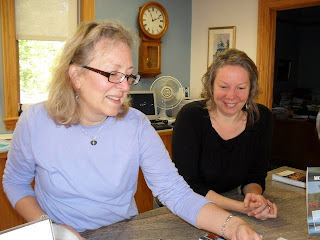 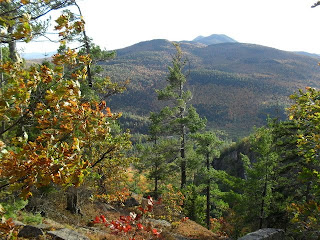 Just the Basics: We are spending the entire Columbus Day Weekend in Conway at the White Deer Motel - a charming modest motel with super-helpful managers, just outside Conway. It is hard to sit here for 3 days knowing that we are only 2 riding days from finishing the trip in Portland, ME, but traffic is a huge problem during this period: (1) Columbus Day is a holiday in NY and almost all the New England States. Schools are closed and families are on the road. (2) The 150th Fryeburg, ME fair is occurring a few miles from here and is heavily attended with resultant traffic jams. (3) We are still in the fall colors season and there are lots of "leaf peepers" on the roads driving out to see the fall colors.

We have, in fact, had a fine time in Conroy - see For Those Who Want More, below.

Tomorrow: We go about 29 miles to Cornish, ME, where we will stay at the Midway Country Lodging (not a typo!)

For Those Who Want More: Despite having 3! layover days, we are running late and need to get to dinner and then pack for our final 2 days of riding, starting tomorrow. Here are some regrettably brief highlights of our stay in Conway.

The White Deer Motel: The motel is somewhat modest but clean and comfortable and the managing couple are great. Our first 2 nights were spent in a pretty small room but then we were moved to a bigger one which has been a great place for us to sit and work today - we have spent almost all day in our room.

Johnathan's Seafood Restaurant is across the street and the only nearby restaurant - we've had 4 great dinners there - Becky has had haddock 3 different ways - all great - and Riley has had it once; we've both had a stuffed Quahog appetizer - YUM! Riley has had a lobster stew and sole with grapes in addition to the afore-mentioned halibut. Tonight B had clam strips and fries and R had fried sole and a baked potato - their fried items are quite light and non-greasy. The entire staff is very friendly - it feels like home.

Bea's Cafe: Three great breakfasts, so far - only open for breakfast and lunch, down the road from the motel. We've had great oatmeal and Riley has had corned beef hash and eggs - one egg broke as it was slipped onto the plate so they put on a 3rd one to compensate! - and a Belgian waffle with blueberries; Becky has had creamed dried beef on toast and their specialty, Garden Fries - home fries and lots of veggies and bacon, topped with melted cheddar.

The Conway Library: Saturday morning we slept in, went to breakfast, and headed for a car rental place - we intended to rent a car for the weekend. It wasn't where Google thought it was so we headed back towards town and the library to do some research. It is a great library. There were already half a dozen patrons outside waiting to be let in when it opened at 10 - one of them observed to Becky that you'd think it was the local watering hole! - she replied that folks must be thirsty for knowledge. We later learned from the librarians that the library is very well used - on Thursdays, typically their busiest day, they have 6 staff on duty!

They are supported by town taxes and neighboring towns without libraries provide vouchers to their citizens to purchase non-citizen library cards @$70/year. There are computers, a nice meeting room downstairs, a busy periodicals room, a great children's room with computers reserved for those under 12 and for parents whose kids would be best amused in the children's room while mom or dad is on the computer - very clever!

Glynis and Lindsey, the two librarians on duty were great! It turned out that they were both cyclists (Lindsey and her husband once cycled to Virginia from Portland, ME!). They suggested a route to Portland from here and got out an atlas to copy maps, as well as a number of local tour books, and they called the car rental place in town for us and found that no cars were available.

The 150th Freyburg Fair, Freyburg ME: The Fair was too far from here for us to walk - perhaps 7 miles - but we learned that it would cost $50 to take a cab - traffic was so bad the cabbie would have to inch along for miles starting somewhere within 2 miles of the fair. We compromised - for $25 they took us to where the congestion began and then we walked. Ditto coming home.

Wood & Energy: A whole aisle was devoted to outside-the-house furnaces, which heat the house with either hot water or hot air. Some of these burned chopped wood - 6 cords will heat a large Maine house for a year. One vendor said that a 10 acre wood lot would supply a house indefinitely, harvesting one acre each year. Many of the furnaces used wood pellets, made from excess wood cuttings at lumber yards. A vendor quoted an estimate that 50,000 houses can be heated annually with these without exhausting this wood supply in Maine. (Bags of wood pellets are to be found on sale at many stores we have seen). Other heaters burned used motor oil.

Arts, Homemaking and Crafts: All the usual delights were there: Baking; jams and jellies (including both rhubarb jam and rhubarb jelly); pickles and relishes; preserved veggies; quilts, knitting, crocheting and sewing; photography; carpentry and so on.

New to us was a Christmas tree judging - not decorated trees, just trees; this is Maine, after all! Ditto a very clear wreath-making demonstration by a woman whose family owns a Christmas tree farm and whose family makes and sells 300 wreaths a year. With classic New England frugality, she took apart a wreath made in a previous demonstration and salvaged almost enough greens from it to make the wreath she was demonstrating for us! She had also rewound bits of wire back onto the spool and succeeded in re-using some of those - although it got tricky enough that she ended up cutting some of the bits off and continuing with new wire!

There were numerous crafters spinning (various methods), weaving, dyeing and doing various forms of needlework - and a place making cotton candy out of maple sugar!

Performers: We enjoyed the Fryeberg Fair Boys in something like their 29th year at the Fair - a vocalist and a pianist were being featured in a performance of rock and country numbers, both originals and covers - they were good.
Posted by Riley and Becky at 2:39 PM