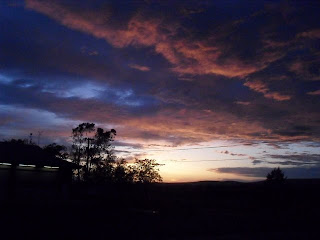 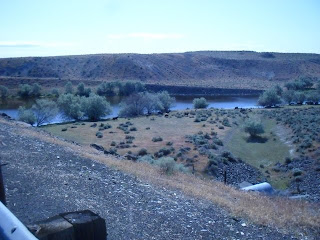 Just the Basics: 46 miles today. The first 28 or so were on Interstate 84 and we zipped along. Lots of hills but we still averaged 10 mph. At Boardman we left 84 and went onto US 730. It's a 2-lane road through agricultural areas that look a lot like the Tri-Cities area - big irrigation rigs, guys driving bright green and yellow John Deere tractors, not many buildings. We are definitely in a new climate zone - see today's photo.

The road has great shoulders, and traffic was fine BUT a good stiff headwind began blowing from the east and the last 18 miles we pretty much fought to go 6-8 mph.

We had planned to camp at Hat Rock State Park tonight but it looks like rain and we're a bit beat after fighting the wind for so many miles, so are in a motel. We plan to stop at Hat Rock in the morning and cook the canned beef stew we'd plan to have for tonight's "camp dinner" as a picnic breakfast instead!

Tomorrow we expect to pass through the Tri-Cities and have dinner with some of Riley's colleagues and a couple of other friends.

For Those Who Want More:
Becky observed today that, to her surprise, in some ways she prefers biking on Interstate 84 to driving on it - when you drive you always have to worry about passing trucks and getting back over quickly, etc. If you bike, you just stay well out of the way and they pass you - typically changing lanes themselves to give you a wide berth!

OR roadside rests often feature a "coffee trailer" manned by some non-profit or other. They aren't allowed to charge for the coffee, but they hope you'll donate to their cause. We stopped at one today and the coffee folks were a homeless-support organization - harvesting, gleaning, providing clothes and blankets, etc. We were happy to donate - and to talk food banking for a bit.
At the same rest spot we met a guy named Michael - someone who spends as much of his life fishing as possible. Turns out he graduated from a high school that was a rival of Becky's, 5 years after she graduated!

In the little town of Irragon, about half way between Boardman and Umatilla, we took a break from the wind and stopped at Bake's Bar & Restaurant. We planned on enjoying some pie and coffee but they had no desserts - just bar food. So we had grapefruit juice, tonic water, and fried onion rings with ranch dressing - not bad! Having learned our lesson yesterday about possibly short hours at small town grocery stores, we also shopped for dinner at a near-by gas station mini-mart.
And a Little Bit More: Boy, are we ever glad we decided to stay in a motel instead of camp. Not too long after we wrote the above there was a downpour and a huge wind storm - not a good night for camping. It's also gotten pretty cold - we were pretty chilly walking back into town for dinner.
We were the only customers in an Italian restaurant's "family" section - there were also a few folks in the bar. Dinner was very good - cold, crisp, generous salad, great garlic bread, good spaghetti and meatballs, and we also enjoyed the glass of house Merlot which we shared. The waitress said they are doing OK - that this is a farming community and right now folks are preparing fields and planting and they are working 12-14 hour days - no time for eating out. We chatted a bit about the weather and our bike trip and she told us about her nephew's family in Vancouver, WA - they are very "green," she says, and hike a lot, participate in a community garden, bike to the store, raise chickens - nice to hear!
On the way back, Riley took the sunset picture we are posting now.
Posted by Riley and Becky at 5:21 PM