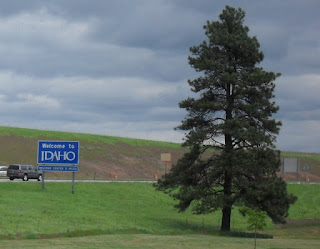 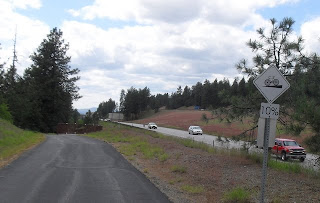 Just the Basics: 40 miles of biking and about 2 miles of walking. We have now passed the 650 mile mark which is the farthest Riley has ever gone on a single trip - and FAR farther than Becky has ever gone.
Today began on the Spokane Centennial Bike Trail and ended on the Idaho Centennial Bike Trail. In both cases, we did some riding on surface streets but the traffic was generally fine and the bulk of the day was spent on paved bike trails which did not allow motor vehicles. Because it is a weekend day there were lots of other bikers and walkers and dogs on the trail - nice and social!
On Monday we are taking a layover day in Coeur d'Alene, to avoid Memorial Day traffic.
Today's Photos: Welcome to Idaho: We rode this same Spokane - Coeur d'Alene route last year and photographed the same sign then. = ) 10% Grade: Between Post Falls and Coeur d'Alene there is a rather hilly spot with several rather steep (albeit short) hills - someone has gone to the trouble to post signs indicating the grade of each; we proudly looked back at this one, having just climbed the 10% grade, non-stop. = )
For Those Who Want More: Here are some of our adventures from today:
The Rocket Bakery, Spokane Valley: As we biked along a street in Spokane today a couple biked up along side. The man observed that we were carrying a lot for a ride to the bakery (where they were headed) - we said we were headed for a bakery in Bar Harbor, ME but asked for directions to the one where they were headed, as well. They went on ahead, riding light-weight road bikes with no gear and going much faster than we do.
When we came to the bakery's road it had heavy traffic and no shoulders - Becky was disappointed but Riley persevered - we went past the busy road and turned on the next street and worked our way safely back - it was worth the effort! We shared a 12 oz. coffee and an excellent whole-wheat caramel cinnamon roll - YUM!
The Guy from France: We had our first interaction with another cross-country biker on this trip - a much younger French guy headed for New York. He and Riley biked along for awhile, chatting, then he sped off - one of the rides he told Riley about was riding the route followed by La Tour de France!
Dudley: Dud came alongside at some point in the late morning. A little younger than we are, he was a serious runner for 20 years before taking up biking - with a vengeance - about 4 years ago. He was pretty interested in what we were doing and biked along with us for a while, biking by each of us in turn and plying us with questions - first politely asking if that was OK. We saw him again later in the day on his return trip. His enthusiasm for our trip was fun for us.
Popcorn & Beer: The motel has free popcorn and they had just made a fresh batch before we came in from our shopping trip (see below) - we opened our beers before starting dinner and had a nice beer-and-popcorn cocktail hour, sitting on our couch and looking out at the wooded hills on the other side of the river across from the motel.
Dinner: We are continuing to experiment with ways to eat well but not always by spending lots of money. Tonight we're in a Days Inn in Coeur d'Alene with a microwave and a fridge. Breakfast is part of the deal, so that's taken care of. For lunch we typically picnic in motels as well as on the road. Tonight, instead of going to an area restaurant we walked about a mile to an Albertson's and bought veggies and fruit for the next couple of days and a wonderful feast from the heat-and-eat foods: We had: balsamic rosemary pork roast and sweet potatoes with brown sugar and cinnamon, both heated in the microwave, wedges of purple cabbage (raw), rosemary-olive oil bread and Moose Drool beer. We'll have the leftovers for lunch tomorrow. YUM!
Posted by Riley and Becky at 8:25 PM