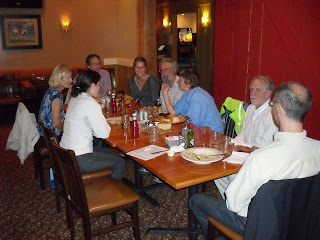 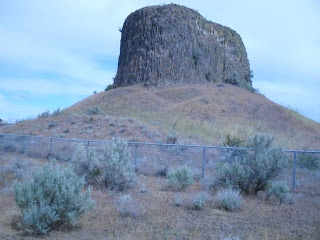 Just the VERY Basics: 56 miles today, with over 30 HORRENDOUSLY windy - in some ways our most physically challenging day. It was also an incredibly beautiful ride and we look forward to telling you about it tomorrow! We are back in home territory - Pasco is one of the Tri-Cities (Richland & Kennewick are the other two), so part of our ride was through very familiar spaces.

We have had a wonderful evening - we met our friends Ash and Nick; Paul; Barb, Rick and Bethany; and Eric for dinner and had a great evening together - see photo.

Breakfast at Hat Rock Park: Started out with coffee from our motel in Umatilla and a shared mocha muffin from a restaurant across the street. A 10 mike ride took us to Hat Rock State Park, where we finally tested our new camp stove and enjoyed a breakfast of Nalley's Beef stew and canned peaches. Climbed up to Hat Rock - named by Lewis and Clark, it looks very much like a tall, broad-brimmed man's hat (see photo).

Ride to Wallula Gap: We then followed US 730 along the Columbia for another 10 miles or so - stark basalt cliffs rising on much of the inland side and the river on the other. We came through the Wallula Gap and stopped for a roadside picnic in VERY TALL grass before turning onto US 12 for what we hoped would be a relatively fast 34 miles or so to Pasco.

On the way to the Gap we paused after a truck weigh-station to let some trucks pass before we started over a bridge. A guy in a big pick-up with a trailer pulled up behind us and stopped, too. Turns out he was an avid biker and wondered what we were up to. He showed us a business card he'd made for his most recent bike trip in Europe - a very cool card which included his contact info, a picture of a recumbent (that's what he rides) and a map of the US with a star showing where he's from - very neat! Hats off to Dave Beach, who turns out to also be from the Tri-Cities!

Back to the Ride - Wallula Gap to Pasco: The sidewinds on the 12 were awful. The road has great shoulders and we expected to charge ahead, but the combination of the side wind and the wind created by trucks rapidly led us to conclude we needed to be off our bikes whenever a big truck or bus or RV passed - and so we were.

This is a good time to note that we are REALLY glad we got rear-view mirrors for this trip. We had tried them years ago and found they were hard to use, requiring constant adjustment. The new ones are much better and really contribute to safety. We simply watched for trucks and got off the bikes before each one passed.

However, when we were ON the bikes we were still fighting the wind. Riley remembered a way around the last section of the 12 so we got off the highway and went around through the little town of Burbank on a route we had cycled before. Much quieter and almost no traffic but we fought the wind all the time. We had to walk across the bridge over the Snake River - too windy to bike.

Biking along the familiar bike trail from Sacajawea State Park to Road 68 in Pasco we were lucky to go 5 mph - wind in our faces and really tough riding. We had planned to meet our friends at the Cousin's Restaurant on Road 68 in Pasco at 7 p.m. but called and shifted to 7:30, thinking we wouldn't make it - in the end, we were there at 7:10. WHEW!!
Posted by Riley and Becky at 10:12 PM