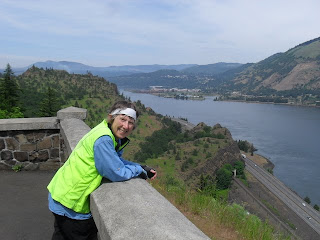 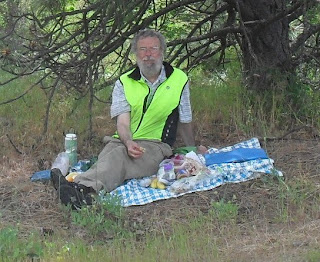 Just the Basics: Only 24 miles today - gloriously hilly however, (something like 1200 feet of climbing), but very manageable. The entire route today was on the Old Columbia River Highway - VERY lightly travelled and with about 5 miles on an OR State Trail with no access for motorized vehicles - paved, signed - wonderful.

Today we rode through springtime - meadows, poppies, lupine, Queen's Anne's Lace, pine trees, OR White Oak, columbine, buttercups, clover . . . and, everywhere, the Columbia River, the jagged hills, the huge basalt outcroppings - a world full of wonders. For the next several days we'll mostly be riding Interstate 84's wide shoulders; tomorrow we hope to get to Arlington but may only make it to Rufus - it's 54 miles to Arlington with over 1000 feet to climb; we'll see.

Breakfast at the Egg Harbor Cafe in Hood River, after some coffee and reading time in our room. Mid-morning snack at a coffee house in Mosier - we shared a freshly- made cup of organic fair-trade Sumatra and a just-baked pumpkin muffin and read a few pages of a Calvin & Hobbs book they had there. Lunch a picnic under a pine tree on a hillside not too far from Rowena Crest, the highest point on this ride - peanut butter sandwiches on raisin nut bread, sugar snap peas, a carrot, an orange and water.

Rain threatened on and off all day but never materialized. When we set out in the morning we decided it would be wise to cover the 4 panniers that have rain covers, just in case - 2 of the other panniers are themselves waterproof & in 2 we keep stuff that won't be wrecked if it gets wet; much of our stuff is also in waterproof bags. Within a couple of miles, the cord in one of Riley's pannier covers was broken and we had to stop for repairs - Becky coaxed the loose end back through its channel and Riley cut a slit in the channel through which we brought the cord; he then tied it off.

At that same spot Becky trimmed Riley's beard - she had made it to the hairdresser before we left but Riley had not managed to get to a barber. Check it out in our lunch photo!

Oregon State Parks use volunteer Campground Hosts. There was one hosting the Old Columbia River Highway State Trail and we had a good chat with him. We have thought that someday we might like to volunteer as campground hosts and this guy was a good salesman - he is, in fact a recruiter for them and he and his wife have been volunteering for 8 years and really enjoy it.

The Old Columbia River Highway is really amazing. Built between 1913 and 1922, it was envisioned by Samuel Hill, an attorney, investor and entrepreneur, and designed by Samuel Lancaster, a pioneering civil engineer. The two men pioneered many road-building techniques and were absolutely devoted to using the highway to share the beauty of the Gorge as well as to promote commerce. The road is designed to never have a grade greater than 5% and all turns have at least a 100 foot radius. In order to get the best views and maintain these standards it is full of lovely curves and swoops and is a wonderful ride.
Posted by Riley and Becky at 6:20 PM