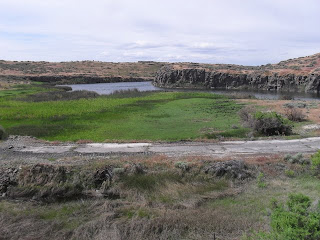 Just the Basics: Not quite 35 miles, with about 1100 feet of climbing, much of it in one REALLY big hill.

We rode through gorgeous country today - the Channeled Scablands, created by centuries of basalt flows followed by repeated massive floods of Glacial Lake Missoula breaking periodically through ice dams on the Clark Fork River some 14000 years ago.

Tomorrow we plan to ride from Moses Lake to Coulee City along country roads: Stratford Road to Stratford and then Pinto Ridge Road to Coulee City, a distance of about 40 miles with about 1600 feet of climbing - we plan on an early start!

Our ride today took us through a back road through vast National Wildlife preserve areas, in the Potholes region - many many small lakes surrounded by basalt walls, often with connecting narrow waterways and areas of green grass in the otherwise sage brush desert. Didn't see much unusual wildlife, but did see many flowers of many types: mustard, balsam root, Yarrow, phlox, daisies, dandelions and others.

As we climbed up out of the Potholes region we came to the same sort of agricultural highlands that surround the Tri-Cities and so many other parts of this region, such as the areas around Connell and Othello and the vast Palouse region. We saw grapes, cherries, apples, wheat, rape-seed (canola oil) - we think, corn, a crop we thought was mint but wasn't - and probably other things we didn't recognize. We heard meadowlarks and saw red-winged black birds and gold-crowned blackbirds and egrets and geese, and swallows and what was probably a great blue heron. We saw some horses and cows - but not many, a couple of squirrels and a marmot.

As we approached Moses Lake we stopped along the road by the mailbox of a modest house to share a candy bar. As we unwrapped the bar two men approached us from the house and invited us to come relax on their lawn - we accepted, but two Killdeer were extremely unhappy about the idea, and were agitatedly doing their broken wing performance to draw us away from what we found were four neatly laid eggs clustered in gravel at the side of the house's driveway! Our hosts knew about the eggs, and assured us that the birds would be OK with this. We skirted the eggs as widely as we could, and enjoyed a pleasant break on the grass.

Our "El Rancho" motel is very nice, and the least expensive yet ($45 + tax). Dinner was cheeseburgers at a Dairy Queen - not very tasty, but a shared banana split afterwards made up for this.
Posted by Riley and Becky at 8:39 PM