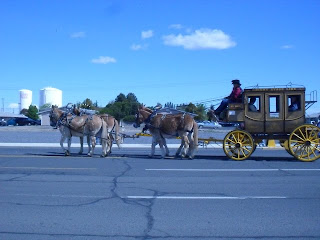 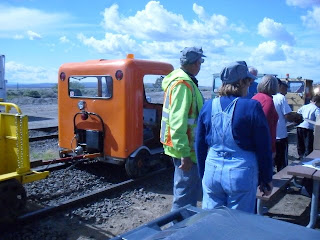 Just the Basics: No miles of riding today, but lots of walking! As we noted yesterday, Othello is celebrating its centennial this weekend! Part of our dream for this trip has been happening upon community dinners, pancake breakfasts, and fairs and festivals in the little towns we'd be passing through - here are some impressions from the first such delight!

Tomorrow we head for Moses Lake. We had planned to take Highway 17 but learned of a better route today in a couple of conversations with local folks - we'll be taking less-travelled roads through the Potholes Wildlife Area!

For Those Who Want More: We emerged from breakfast at a Mexican restaurant to find ourselves at the staging area for the event's parade: fire trucks - new and old; a covered wagon, a stagecoach, and a surrey; horseback riders; a family of clowns; the high school marching band and the intermediate school marching band (HUGE); a float carrying many past Miss Othellos; vintage cars; et cetera.

Spent an hour in a fascinating museum, learning about local railroad history and irrigation history, and pioneer families. The museum included a large collection of stuffed birds and birds' eggs - the hobby of an early farmer.

Spent an hour listening to a group from Moses Lake called The Old Time Fiddlers - actually, 2 fiddles, 2 banjos, an accordion and lots of guitars - good fun, lots of familiar songs.

Visited a 1946 Milwaukee Railroad caboose that had become a museum about cabooses. Until 1980, Othello was a major railroad town for the Milwaukee Railroad and many families have a long history of working for the railroads. One thing we were surprised to learn is that beginning in WW I, women were often hired to clean and lubricate the engines - it turned out they were more meticulous about it than men!

Had a wonderful ride on a Railroad Motor Car or "Speeder" - these little cars which ride the rails replaced handcars but were, in turn replaced by pick-up trucks fitted with iron guide wheels so that they can ride the rails. Speeders are no longer used by railroads but a network of hobbyists has kept them alive and bring them to events like this centennial. We had a GREAT time - see photo!

Last fall we biked from Spokane to MT. Much of the trip was along abandoned right-of-ways of that same Milwaukee Railroad which was the core of Othello's existence for so many years - it was a neat connection for us, and there were other connections to that trip, as well. One of the books we read on last fall's bike trip was by Henry Wallace and told the history of the irrigation projects that made agriculture possible in the West - and here we were today getting an intimate picture of how that looked at the local level.