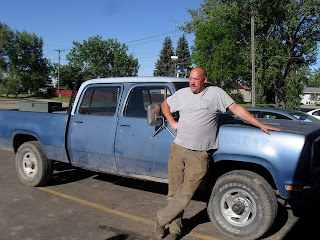 Great riding conditions! We had: Wide, paved shoulders (with the exception of the 4 miles from Tioga back to U.S. 2); the wind at our backs; temperatures in the 70s and about 600 feet of climbing, as opposed to yesterday's 1200.

Nice breakfast in the Sportsman's Cafe in Tioga - very sunny waitress, the Minot paper, very good oatmeal with raisins and brown sugar and the only actually toasted English muffins we ever remember getting in a cafe - usually they are brushed with butter and heated on the grill. Added to that, they had orange marmalade. YUM!

Great encounter with Chad from Minnesota (pictured) - see below!

En route, Kathy and David from NY caught up with us - she is 70, he's 74; they started in Portland and are headed home to NY City. They look very fit, have done lots of cycle touring and took off like lightning - very impressive!

Also met Dan, cycling alone from PA to MT. He cycles in hiking boots! He says they are very comfortable and his feet are always dry.

Chatted at the rest stop with a couple about our ages driving to Glacier who asked about our trip - the guy jokingly asked if we'd known how far it was to Maine when we started! They had seen John and Valerie and their cycling 9 year-old triplets, Deidre, Ian and Zara about an hour earlier!

Arrived in Stanley to discover that no cafes in town were open, not even the one at our motel. Found a grocery store about 15 minutes before they closed at 4 and got ingredients for a very nice picnic dinner in our room: Sandwiches, canned beans, and 2 different deli salads - a spicy pasta and a broccoli and cauliflower w/cashews, grated cheddar and a light mayo-type dressing. The bar adjacent to the motel is not closed, and they sell beer from a drive-up window, so we also had beer. = ) = )

Tomorrow: About 54 miles to Minot, where we will stay at the Comfort Inn. Hopefully, there will be both a strong tailwind and good shoulders most of the way.

For Those Who Want More: After breakfast in Tioga we headed for a convenience store (the big grocery store wouldn't open until 11), to buy a paper and some water. As we passed the closed market a REALLY tall guy in a great old pick-up about the age of our 1987 wonder, pulled up and got out - we told him the store wasn't yet open and that we were headed for a convenience store we thought was a few blocks down the road. He offered us a ride, which we accepted.

We ended up standing around outside the convenience store and talking for a long time. Chad is from Minnesota (like Riley) although way up north - Riley knew the area. He works as a roustabout in the oil fields - his official job is the earth-moving part of things, but he actually spends a lot of his time on mechanical stuff, as he has lots of skills in that area. We have been dying to ply someone with questions about oil drilling and he was full of information - if we have any of the following stuff wrong, it's our error, not his.

Some stuff we learned:


We feel like we are having a Travels With Charley experience on this trip, meeting all these amazing people like Chad.
Posted by Riley and Becky at 4:02 PM