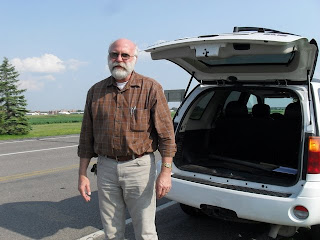 Just the Basics: 56 miles - which bring us 7 miles from completing 2000! It was a good day but pretty long - and a bit complicated getting through Fargo to our motel, but we got help from Mike (see below), a passing motorist, which got us safely where we needed to be with a minimum of frustration.

It's 8:30 p.m. and we haven't eaten so we'll say goodnight but add a bit more, at least, in the morning - we need to buy bike tires in the morning and the bike shop doesn't open until 9 so we'll have some time then.

7/18: For some reason, after using the Internet successfully much of the day on 7/17 for dealing with email, locating lodging for the next few days, etc., we were unable to use it to Blog last night when we tried to "catch-up" for the last few days - possibly because the weather was rather unsettled (tornado watch, very cloudy, etc.). We'll try again later today! Meanwhile, here's a picture, at least, of Mike!

Mike, Our Hero of the Day: When we arrived in Fargo we had to leave the Adventure Cycling Bike Route to get to our motel - Kelly's (very nice, as it turned out), which Riley had selected due to its proximity to Scheels All-Sports, where he expected to buy good tires to replace the somewhat light-weight replacements we had on both our rear wheels.

He had a tentative route mapped out, but when we got to the outskirts of Fargo, the first part looked pretty daunting - heavy traffic, no shoulder, etc. We pulled off to look at maps and reconsider. A guy drove by, honking madly and shouting to us, but we couldn't hear what he said. A few minutes later, he pulled up alongside us, having turned around and come back. It was Mike. Seems he'd seen something fall from Riley's pocket when he took out our maps and Mike wanted to be sure we knew about it.

He then spent about 20 minutes thinking about the best route for us, drawing a map of an especially tricky part, and then going to the back of his car to tear a couple of map pages out of a phone book and annotate them to be sure we knew what to do. It worked perfectly and we used it the next day to get back to the Adventure Cycling Route out of Fargo.

Celebrating 2000 at the Red Lobster: Although we ended the day 7 miles short of the 2000 mile mark, when we saw the Red Lobster next to the motel, it felt like time to celebrate! We had martinis before dinner, and very nice seafood dinners with wine. We also had fun talking about our trip with the hostess and our waitress. As we left the restaurant, another staff member was also leaving. She immediately identified us as "the bikers," and said that other staff had plied our waitress with questions about our trip - which they seemed to think was pretty neat! = ) = )
Posted by Riley and Becky at 6:24 PM