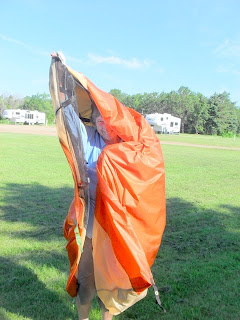 Just the Basics: 32 miles along U.S. 2, making 227 for the week and a total of 1808 miles - we're 8 miles over our planned 200 per week at the end of our 9th week on the road. Scenery much like yesterday, biking pretty grueling. We had some fairly short stretches with great shoulders and relaxed riding, and the usual gorgeous scenery. The 1st 15 miles had narrow, rumble-strip-filled shoulders with gravel alongside, but good visibility and a tail wind, so we did them in 1 1/2 hours, despite occasional brief stops for traffic.

Then came many miles of road construction. One lane was closed and we could ride in that but most of the time it was tricky riding - sometimes gravel or dirt, lots of barriers to go around, and very difficult surface. They are shoring up the road and raising it due to flooding (see Devil's Lake info below) and part of that involves replacing stretches and part seems to involve cutting 2 parallel sets of 3 narrow holes about 2 feet long at each joint between concrete panels and putting in some spacers and pipe, then roughly covering that with a sort of smear of concrete - which they will presumably come back and smooth out. Sometimes the holes were still open - just about the right size for a tire to go down into - so we had to ride very carefully to avoid: holes, concrete smears over holes, drop-offs between the road and the shoulder . . . . No traffic to worry about and sort of interesting to see, but still tricky!

Near the end of this we came on a truck with a crew doing the smoothing-over process - a huge truck was proceeding VERY slowly along, disgorging blobs of cement over the sets of parallel holes and a crew of about a dozen men followed right behind, with pairs spreading the cement and then finishing it in steps, down to the last 2 guys who had hand trowels to do the final smoothing. The 1st two guys next to the truck were wearing dust masks and they, their clothes, and their faces were totally covered with cement dust. YIKES!

Today's Photo: Our tent was pretty wet this morning, thanks to the thunder shower yesterday and lots of dew. We packed up most of our stuff as soon as we awoke, moving the tent over into the sun to dry. It was pretty windy, as you can tell from this picture of Becky carrying the dried tent over to Riley so we can fold it!

Tomorrow: 44 miles to Pekin along U.S. 2 and ND 1 - not the route on our cycling map, which is flooded (see below), but one Riley worked out by talking to local folks. We hope to stay at the Prairie View Lodge in Pekin, but they have yet to return our call. The Lodge also has a campground, so we'll likely be there one way or another!

For Those Who Want More:
Riley's Rear Tire: Riley managed to find a rear tire for his bike at Walmart here in Devil's Lake and replaced it - we can stop holding our breaths about whether or not his tire will make it to Fargo!

Becky's Injured Finger: We've had a request for an update! Becky will take her last dose of Cephalexin (500 mg 3/day) tomorrow morning. We continue to change the dressing and apply mupirocin 2% prescription antibiotic ointment 3x/day, and she is wearing the splint to keep the finger straight. The cut is healing nicely - no signs of infection so far and the shallow ends have pretty well closed - the original laceration stretched from below the knuckle almost to the tip of the finger; now it's mainly the middle third of it, where it is pretty deep and crooked, that has yet to close. We will continue to monitor it and see a doctor again if needed.

The Horror of Devils Lake: Devils Lake has no outlet, and has been rising relentlessly for years. In 1993-94 it rose 5 feet in 6 months, and has risen steadily since - a total of 24 feet so far. A result is that has flooded 81,000 acres, increasing the size of the lake to more than 120,000 acres, and threatening to cut off all roads into the town of Devils Lake.
The folks here are, of course, extremely concerned. The level of 40 miles of road has been raised, and a levee has been raised and widened three times. (Our planned route south-east to Fargo is closed due to flooding, forcing an alternate route). Long term solutions being discussed include water storage in an upper basin, further raising infrastructure like roads, and creating some kind of emergency outlet.
Posted by Riley and Becky at 7:23 PM