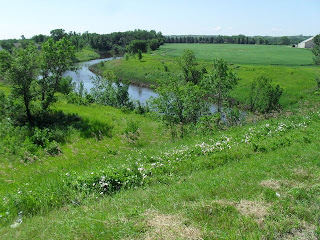 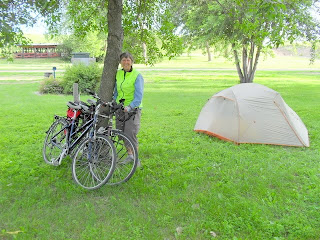 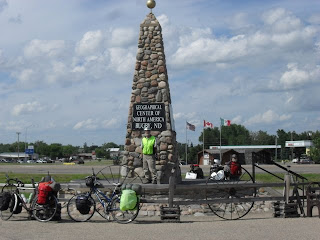 Just the Basics: Day 60: 27 miles to Granville and our 1st night of camping; rough ride most of the way, much of it on rather difficult gravel; hard on Becky's splinted finger. Lovely countryside; saw some golden-headed blackbirds and some toadflax.

Day 61: 45 miles to Rugby and the Northern Lights Motel. About 10 miles of good shoulder and 8 somewhat rough but peaceful miles on a closed section of the highway where road work was in progress; let's not talk about the rest! Nice lunch in Towner.

Today's Photos: (1) The Mouse River - note the morning glories in the foreground! (2) Our campsite in Granville's City Park. (3) Rugby is at the Geographic Center of the North American Continent, according to a U.S. Department of the Interior survey done in the early 20th century.

Tomorrow: We think we are going along U.S. 2 to Leeds, where we will camp at Jan's RV Park - we 've had some local advice that the route recommended by our maps is tougher, and while we don't much like the shoulders in this section of the 2, it is possible to ride safely none-the-less, due to good visibility. On Saturday we will continue along the 2 to Devil's Lake, where we hope we willl get a motel but could camp. We may not blog tomorrow, due to camping.

For Those Who Want More: Becky's lacerated finger and its attendant splint are impeding her typing - here's a quicker list than we'd like to have provided!

Dinner at the White Buffalo Grill - what fun! We split a buffalo steak dinner and a beef steak dinner. Our verdict: Buffalo (leaner, less cholesterol) is better - we already knew we liked ground buffalo.

The bartender-waitress is the daughter of the owners - she's 5th generation ND farmer; her family has been raising buffalo for the last 30 years; they currently have 200 head. She just graduated with a degree in ag and a minor in ag business and is home to help run the farm - and the grill, which they opened a year ago.

Also had nice chats with two farming couples at the bar. Becky spoke with an older couple; they "no longer farm" actively they said - but have two teams of horses for pleasure (just won 3rd prize with their wagon at the Towner 4th of July parade), 23 head of cattle (raising for market), 100 chickens, a garden, and some geese! Riley chatted with a hog and cattle farmer about various devices he'd created to speed up laying fences - among other topics!

This morning we thought we heard a peacock while we were still in the tent. As we were packing up we heard the noise again - Becky looked up and saw one red fox chasing another up a hill at the end of the park and heard it bark - turns out that's what we'd heard earlier!