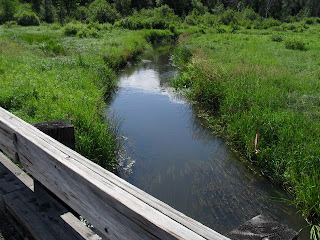 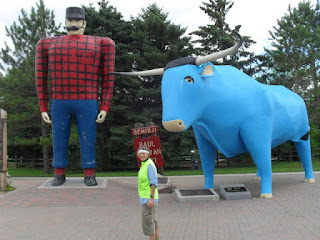 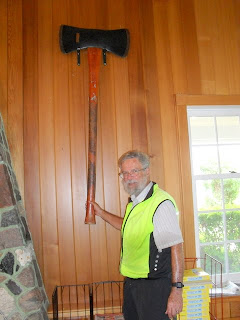 UPDATE, 7/21/10! Route Change for Today: The mail we picked up yesterday included a set of bike maps for Minnesota. We found a long, paved, off-road bike trail between Hackensack and Brainerd (The Paul Bunyan State Trail), which we can take to shorten our route to Minneapolis/St. Paul and are re-routing to take advantage of that! We expect to spend the night in the town of Walker, MN on the shores of Leech Lake.
Just the Basics: 30 miles to Bimidji and another 7 around town. We picked up our 1st General Delivery mail, visited Paul Bunyan and Babe the Blue Ox, and went back to the edge of town to our Super 8 Motel - where we met a Dutch couple riding from Denver to Toronto. They said we were the 1st cycling couple they had met on their journey - lots of singles, groups, etc., but no couples. Actually, counting them, we have only met 6 - 4 cycling as just couples, Team DIZ - parents and 9 year old triplets, and a couple that was part of a group of 9.

This was a pretty hilly day - although not actually as hilly as we'd feared from the riding notes on our Adventure Cycling map!

We had a nice lunch in the tiny town of Becida, where we had a conversation with two guys at the bar - one of whom was a deputy sheriff and one of whom is a 19 year old working for a road-resurfacing company. They suggested a modification of our route which worked out very well.

We are coming into wild rice country. According to our Adventure Cycling map, a successful Indian rice-gathering pair can harvest as much as 300 pounds in 3 hours, yielding 150 pounds of processed rice, but the development of a new, hardy, machine-harvestable strain, now grown in places like California, has reduced the price from $20/lb in the early 1970s to $2/pound today. This has had an obvious impact on Native American economics, but wild rice is still a staple food and also has ceremonial and sacred importance for tribal peoples.

Today's Photos: (1) The Mississippi, as it appeared in one of several crossings which we made today; (2) Becky with Paul Bunyan and Babe the Blue Ox in Bimidji; and (3) Riley with Paul's ax in the Bimidji Visitor's Center.

Tomorrow: 40 miles east to Denny's Resort in Bena, where we will probably be camping. There is some kind of tournament in the area; the 1st place we called to try to get a room was full; the 2nd place has yet to return our call - and that's all there is!

For Those Who Want More: No more today!
Posted by Riley and Becky at 7:29 PM