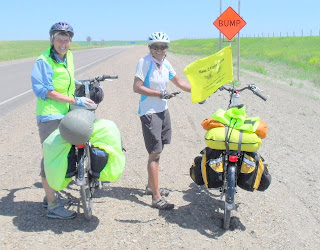 Just the Basics: We are still in Williston, waiting for cooler days and a new wind direction on Saturday, when we'll go on to Tioga.

Today we went to the laundromat and did some shopping before returning the car we rented yesterday - see For Those Who Want More for some good stories about the folks at the car rental place.

We spent most of the day at the public library - Riley read a bunch of local history and related stuff (from their collection) and used our computer to do some route-planning; Becky read about Jeanette Rankin, the first woman elected to Congress (she mistakenly thought she was from ND; actually it was MT, but she was involved in women's suffrage in ND) and worked on correspondence and financial stuff.

We saw a Peace Pole in a public park in Williston today - the first one we have seen on this trip. ND calls itself The Peace Garden State.

Tonight we are going up to see The Overlook - see below; we'll post about it tomorrow!

Tomorrow: Holding in Williston. Saturday we ride to Tioga.

Nuj Funglada: We met Nuj, another cross-country rider, about a week ago, and for several days saw each other at various stops as we went along. We haven't seen her since Tuesday - she may have gone on despite the weather, while we have been taking a little time off. She is riding to raise awareness of lupus, having lost a daughter to that disease. She is riding alone - really tough to do, we think, but she has certainly risen to the challenge!

Larry's Car Rental/Dakota Car Rental in Williston, ND: Larry's was recommended to us by Diane, our super-helpful motel manager in Culbertson. We chatted as he drove us back to drop him off after he'd picked us up yesterday, and really like his approach to business. We asked how business was - good - and who rented cars here.

About 33% are oil company folks, the rest mostly locals, with the rental paid for by insurance, when damaged cars are in the shop. Larry told us he bills the insurance directly, trying to make it as easy as possible for his customers, most of whom would never have rented a car before. He explained that typically a friend or family member could provide a ride or loan you a car, unless you needed it for a longer time, such as after an accident. He figures folks have enough to worry about at such times without unfamiliar paperwork! When we tried to tip him for pick-up and drop-off he refused, telling us to give it to the church next time we go.

Andy Chandler and Getting to The Overlook: When we dropped off the car today, Andy was the one to take us "home." We asked to be driven to the public library instead. We got to chatting about local history and Louis and Clark - turns out Andy's a history buff and a font of information, has done some re-enacting, et cetera. When he heard we'd skipped going to The Overlook yesterday - you can see the Missouri and the Yellowstone and surrounding areas - he said we shouldn't have skipped it.

Then he drove us by the local Hardee's, explaining that Marv Baarstad, The Overlook's conservator, would probably be there having coffee and, if he had time, would almost surely love to take us up there! He wasn't around so Andy called someone who usually had coffee with him to see where he might be - no news. He tried Marv's number - no luck. He then took our contact info and gave us Marv's number, too, saying he'd try to make the connection.

Since we were spending the day in the library, we had to turn off our cell phones, so about every hour one of us took Becky's phone outside to turn it on and see if we might have a message from Marv, although the whole thing seemed pretty unlikely. Riley went out at 4, turned on the phone, and it rang. It was Marv. He said he'd pick us up at 7 to take us out there. People are amazing!
Posted by Riley and Becky at 1:51 PM