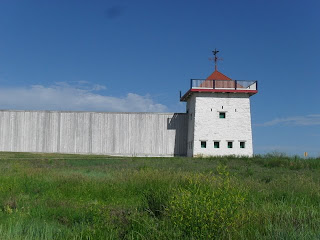 Just the Basics: We slept to the outrageous hour of 8:30 a.m., barely making it to the breakfast provided by the motel (6-9 a.m.). We rented a car and drove out to the confluence of the Missouri and Yellowstone Rivers, where there's a really nice interpretive center - the Missouri-Yellowstone Confluence Interpretive Center - with a great video on the history of nearby Fort Benton and a good deal of information about the natural history of the area.

We then went on to nearby Fort Union, a wonderful re-creation of the Fort Union Trading Post operated by the American Fur Company from 1828-67; the largest fur trading post on the Upper Missouri. The trading post traded with Assiniboine, Crow, Cree, Ojibway, Blackfeet, Hidatsa and other Native American Tribes and apparently lived relatively peacefully with them for most of its life. Lewis and Clark also camped in the area. It was wonderful to actually see the confluence of the Yellowstone and Missouri Rivers having read so much about them in Undaunted Courage.

The rangers there do some historical re-enacting - we were greeted in the Fort's Trading Room by a ranger dressed in period dress who was very knowledgeable about the fort and patiently answered all our questions - we must have had his exclusive attention for more than half an hour, as well as that of another man who was there - possibly a historian or archaeologist from another country or perhaps a ranger learning to do the re-enacting or . . . ? This fellow is there for 6 months of every year; the rest of the time he works and lives in Colorado. We also spent a good deal of time talking with a Native American Ranger and with another Ranger who is also a history professor and who participated in some of the original archaeological work done in preparing the re-creation of the fort.

Tomorrow: We are staying in place at the Super 8 in Williston, ND through Friday, 7/2/10, waiting for the heat wave to break and the wind direction to change. On Saturday, we head for Tioga, ND, which is about 52 miles from here, with about 1200 feet of climbing. At that time, the high is expected to be 74 instead of 95 and the wind to be N/NW instead of E/SE. Sunday should be even better.

For Those Who Want More: We will do a catch-up blog tomorrow; we hope to spend much of the day in the public library, reading, writing postcards, blogging and the like.
Posted by Riley and Becky at 7:27 PM