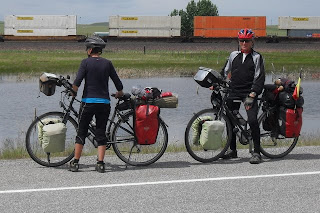 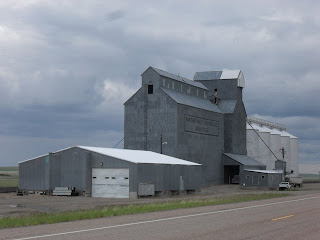 Just the Basics: Only 25 miles today - as per our planning, based on the location of the next bike shop (Havre) and the spacing of the towns. Our day began with a 2ND FLAT TIRE FOR RILEY - THIS TIME THE FRONT TIRE - it was pierced by a fancy upholstery nail - we discovered it on our way to a very nice breakfast at a Cut Bank restaurant that we think was called "The Family Cafe." Breakfast meats which they offer included "fried pork side," which we think is the salt pork we put in homemade baked beans; the most expensive item on the menu was sweetbreads! We're in stock-raising county, for sure!

Riley was only able to repair one of the damaged tubes this morning - and that necessitated a trip to a NAPA auto parts store in Cut Bank to get fresh patch cement - heretofore, we have had so few flats in the last few years that the rubber cement in our patch kit had dried up. Our Cousin Steve read yesterday's post about the first bike troubles and did some online research to try to locate tires and tubes in Cut Bank and actually found a source and emailed us the information - unfortunately, they didn't have the right sizes, but he is now our Director of Research!

Shelby is a town of about 4000 folks; main industries are: Railroad, farming support, tourism (Glacier & Canada), a prison, the county seat - and, coming soon, the FBI! It's totally charming. We're at the O'Haire Manor Motel, a nice , older, AAA motel where a pleasant room w/screened windows which actually open, a fridge, microwave, TV & double bed is just under $60 with tax! There's also a guest laundry - and boy did we need it.

We're going to have to do a "catch-up" blog in a couple of days, but we need to mention one item here: Yesterday we met a couple of touring cyclists from Belgium - they were going west from New York. They are probably a bit younger than we are, but not a lot - and BOY! - compared to them we're pikers!

They, too, are using Adventure Cycling maps.

Today's Photos: (1) The touring cyclists from Belgium - regrettably, we didn't get their names; (2) A grain elevator - very typical in these parts, often near the railroad - trains are our most constant companions in this area.

Tomorrow: 43 miles to Chester with a 9 mph headwind most of the day.

For Those Who Want More: We promise to get back to you about: Curlews,frogs, trains, the new landscape, meals in Browning and Shelby, trains, pit stops, mountains and more!
Posted by Riley and Becky at 8:27 PM