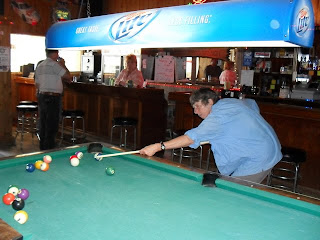 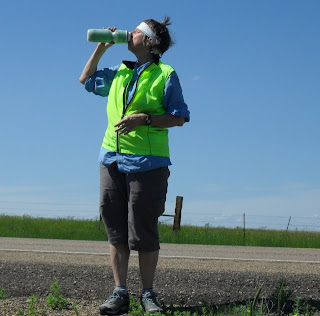 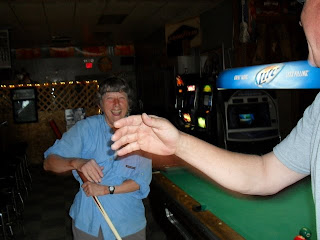 Just the Basics: 48 miles on U.S. 2, pretty decent riding conditions - the 1st 10 miles or so had poor shoulders but light traffic and generally good visibility; the rest of the time the shoulders were wide and we rarely had to stop for traffic. It was hot and mosquitoey - today we went over to the dark side - we are now using Deet-based insect repellents. Probably for that reason we did pretty well today, bite-wise - until we stupidly went for a walk after dinner having washed it all off - YIKES!!!!
After we stopped for lunch in Malta a guy saw us putting on sunscreen and repellent - he told us that the mosquitoes in Saco flew in formation! He was right. We stopped once about 5 miles from town, intending to drink water - a CLOUD of them immediately boiled up around us - end of stop!

Today's highlights included a great breakfast, a visit to the dinosaur museum in Malta, losing our camera and getting it back, a nice time in the bar in Saco, and tons of beautiful scenery.

There's another group of bikers at the motel: A family - mom, dad, and 9 year old triplets, biking on a tandem and a triple!! Sadly, we have only seen the mom and only for a couple of minutes - they started in Portland and are headed for Washington, DC.

For Those Who Want More:
Morning at Stage Road Inn, Dodson: We woke to the sound of birds and with early morning sun and still-cool air streaming into the room. We dozed a bit, had some coffee, and just enjoyed being alive. Breakfast was great - locally-made sausage, eggs, waffles, fresh strawberries, and 2 kinds of homemade jam - chokecherry (made by our hostess Sandy), and raspberry-rhubarb (made by her daughter).

Malta: We spent a couple of hours in Malta - shopped for insect repellent, sunscreen and bite-treatment; visited a small, interesting dinosaur museum; and had a good lunch. We also had a nice experience at a convenience store. We had stopped in search of repellent, et cetera. Becky went in while Riley stopped to buy a newspaper from a vending machine. We then went on into town in search of stuff they hadn't had at the convenience store. As we got ready to go on, Riley realized he didn't have our camera - long story short, he'd taken it, his knife and other stuff out of his pocket, searching for quarters for the newspaper machine, and left them on top of it. We rushed back to find it all waiting in a little bag at the cash register - another patron had just turned them in - we were able to catch him and thank him just as he was about to drive away - he and his wife were on their way to Glacier from KY. = )

Wildflowers: Today the whole road was lined with wildflowers - most notably, purple prairie clover, along with occasional white and yellow clovers. Their scent filled the air - it's easy to see why clover honey (a local product) is so good!

The Bar in Saco: Whole bunch of neat stuff: