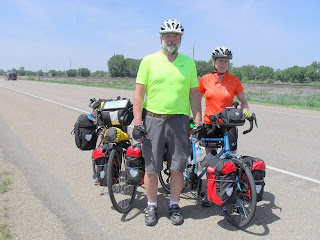 Just the Basics: 21 miles - a short day due to location of motels for the next several days.

We had a nice, slow morning in Havre. Brian and Kristin Nanners and their friend John were at the cafe for breakfast when we got there and we chatted a bit, read the paper (lately we're reading the Great Falls Tribune), and enjoyed our oatmeal.

Then we walked downtown and bought Riley a pair of rain pants (we left his somewhere) - something Becky thought Riley really needed - and bought Becky a very light sun-hat with a visor - something Riley thought she really needed. Not surprisingly, the staff in the store are bikers and one of the guys spoke enthusiastically about Undaunted Courage, the Lewis and Clark book we recently finished.

Riley also got a very nice haircut. While he was having it, Becky had a great time reading Trout Unlimited's magazine - they're a great conservation group and she particularly liked an article on stream/fishery re-development on the Upper CT river. The barber and Riley chatted about many things - including mosquitoes (apparently we ain't seen nothing yet!!!); he also told us not to miss the Wildlife Museum in Chinook (see below).

Today's Photo: Brian and Kristin Nanners. As we biked to Chinook, 1st John caught up with us, then, later, Brian and Kristin did. John wants a faster pace, so had gone ahead on his own. (We mentioned them yesterday as bikers 5, 6, and 7 whom we met last night.)

Tomorrow: 49 miles to Dodson, where we'll be staying in our 3rd B & B. If things go as planned, 5 more nights in MT after tonight and then we'll be in ND. (We may take a break somewhere in there, however.)

For Those Who Want More:
Riding Today: We thought it would be pretty tough; our MT biker's map shows the rates of traffic on all major highways and gives some info about shoulders - lousy on this stretch of the 2, according to both the map and folks in Havre. It was really narrow much of the way, but in some parts there was a rideable dirt area beyond the shoulder - it was an OK day, despite many stops to let traffic pass for safety purposes. We also saw the Milk River for the first time, which in this area follows what was probably an ancient riverbed of the Missouri River. We saw lots of flooded fields and overflowing streams.

A Change in Scenery: We are loving our ride through North Central Montana's High Line Country - despite having experienced heavy rain and big winds, being hailed on and having to seek shelter from a major thunder and lightening storm in the last few days. All this has been much harder on MT than on us - lots of serious flooding (we are seeing some of this) and several tornadoes which have wreaked havoc and killed at least one person (fortunately, we have not seen any of those!). The country is a BIG contrast with the mountain scenery through which we rode starting way back in Spokane. Now it is rolling country with huge wheat fields and huge grazing lands and very little other vegetation except in riparian areas (makes it hard to find places for a pit stop). One of the great pleasures is hearing frogs in the wet places - we never hear or see them in the Tri-Cities! We are starting to see curlews again and a couple of days ago one flew along above and ahead of us for a long time, making its high-pitched cries.

Brian and Kristin Nanners: Experienced bikers following the same route to Bar Harbor as us, but riding at a faster pace - they are considerably younger than we are and very fit and active. They are administrators at what sounds like a neat private middle school in WA. Fun to talk with and they have their own Blog at Crazy Guy on a Bike. They were bikers 5 and 6 whom we met yesterday but we only spoke with them briefly last night.

John and Kathi Johnson: These are the first two of the 7 other bikers we met yesterday. They hail from WI and ride a tandem and have done a lot of tandem event-rides. Kathi is just retired and John is about to retire. Also a bit younger than we are and really great to share biking stories with; we thoroughly enjoyed our dinner and beer with them last night. Kathi is going to email a picture they took of us with Kate and Derek (see below); we hope she's also emailing one of her and John! We'll share them when we get them. Like us, they, too are blogging - their blog has lots of detail about the countryside. If we get their permission we will post their URL.

Kate and Derek: Numbers 3 and 4 yesterday, they also joined us for dinner and beer last night. Much younger than we, they hail from MN where Kate is a nurse with Healthcare for the Homeless (Becky is a longtime fan); she's about to start to train as a Nurse Practitioner. Derek is a graphic designer who did catalogues for a sporting goods firm and is now deciding what next. Like the Johnsons, they're headed West - again, great dinner and drinking companions. They're doing a fancy blog (remember that Derek is a graphic designer), complete with little video clip interviews of folks they meet along the way. Somehow we haven't been able to locate the blog, but we're trying.

Chinook: Chinook has less than 1500 people, 1 motel + restaurant, one bakery open for breakfast and lunch (where we had a great navy bean soup with lots of cabbage) and a pizza place which, sadly, doesn't sell beer. The high school teams are the Sugarbeeters - there are sugar beets painted on the sidewalks at street corners. They also have 2 wonderful museums!

(1) The Blaine County Museum (which appears to also have Dept. of the Interior connections) has a very nice bookstore, some good displays of local history, and an absolutely amazing multi-media presentation (primarily video but with occasional use of large, wonderful paintings done specifically for the presentation and very skilfully used in sync with the soundtrack on the video) called 40 Miles from Freedom, which tells the story of the attempted flight to Canada of the Nez Perce people, under Chief Joseph and other chiefs, and their last stand, the Bear Paw Battle, about 15 miles from here. Their journey ended just "forty miles from freedom" in Canada - really moving and extraordinarily well done.

(2) Chinook's own Wildlife Museum: Founded by a group of local citizens and devoted to MT wildlife species, it is really exceptional. The building was originally a movie theater and was donated. They do a major fund raiser every year - a prime rib dinner in a local venue such as a church, along with a silent auction. They also wrote some grants and many of the stuffed animals in the displays are "sponsored" by local folks. Somehow they were able to hire Acorn Exhibits, of MN, to design and build the exhibits and they are fantastic. Among our favorite parts were an underwater beaver den with a mother and several babies, and, elsewhere in the same exhibit, baby wood ducks jumping into the water from their nests, built up to 60 feet up in streamside cottonwoods!

One More Museum - Havre Underground: Yesterday we took a tour of this great museum. Like many towns, Havre once had an extensive system of underground tunnels downtown, built mainly for pipes for the city's steam heating system, but also full of basement storage areas for local businesses, and, eventually, places where many Chinese railway workers lived, and a brothel was located. After a major fire, many businesses moved into their own cellars and set up shop for some time. There are great re-creations of a drug store, a Chinese laundry, an entrepreneur's office, a brothel, a bakery, a mortuary, a dentist's office, a sausage maker's, a butcher shop, and so on. There is also a railroad museum upstairs. All of this is staffed by local volunteers - our tour guide was great.
Posted by Riley and Becky at 7:31 PM