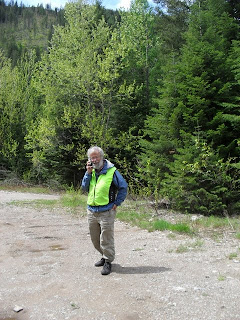 Just the Basics: 20 miles and about 2000 feet of climbing. If you have been paying attention, you will wonder what the heck we are doing in Kellogg, when we stopped here for dinner on the 1st on our way to Wallace.

Well - it has been quite a day and we're going to tell the main story here in Just the Basics.

We left Wallace in good time this morning and, as planned stopped in Mullen at about mile 7, having climbed about 500 feet up to the end of the Trail of the Coeur D'Alenes. Also as planned we stopped at the Bitterroot Coffee House in Mullen, owned by April Dotson and her husband Mike, a painter whose paintings adorn the walls of the coffee house - and are for sale. We were there on our biking vacation last fall and really loved it. She does her own delicious baking and it's a great place - they have fair trade coffee and a wonderful kids' play area with a blackboard painted on the walls, etc.

We were planning to hop on I90 at that point and go on to Saltese or St. Regis MT - but ended up deciding to reprise our ride to Lookout Pass last year which was mainly on US Forest Service packed dirt/gravel roads - and so we did, for about 13 miles and 1500 feet of climbing. It was a glorious ride.

Unfortunately, within a half mile of Lookout Pass Riley noticed that Becky had a lacerated tire with about 2-3 inches of tread separated from the tire and every sign that more would be separating soon. We were nearly at the Pass and at Lookout Lodge there, which has a cafe and rents skiing and mountain biking equipment - but we didn't know if they were yet open for the season.

Long story short: They were open for the season - but planning to close for the day at 3:30 (it was 3:20 when we arrived). There were only a couple of staff there and business was slow - they had thought about closing at 2:30 but decided to hang on until 3:30 - VERY luckily for us. We carry an extra tube but were not carrying an extra tire.
As we expected, they did not have the tire we needed BUT Mark Christiansen, the bike shop manager, volunteered to put our bikes in his truck and take us to the bike shop in Kellogg (he lives in Osburn, about 6 miles from there). We called the bike shop in Kellogg - the only one for a LONG way from here - and they had the right tire.

We reached Mike and Debbie Domy's Excelsior Bike Shop in Kellogg before it closed and in short order Mike put on a new tire and checked Becky's gears and the other tire and sold us a lighter tire that will do for a back-up - and recommended the Casa de Oro restaurant near the Trail Motel recommended by Mark and we were on our way! We're typing this at a booth in the Casa de Oro, having had a great authentic Mexican dinner - our waiter spent the 1st 16 years of his life in South LA. AMAZINGLY, as we left the restaurant, someone greeted us from the booth behind us - it was April and Mike from the Bitterroot Coffeehouse!!!
Tomorrow: We will bike about 6 miles to Osburn, where Mark lives, and meet him at his house at 7:15 a.m. and ride back up to the pass with him. In addition to managing the bike shop at the Lookout Lodge Mark sells hand-tied flies online and does some fly fishing guiding locally. Check it out at: http://www.troutbumflyfishingco.com/ Amazing people everywhere!

Once we get back to the pass we can continue on forest roads to Saltese, MT - possibly further. Rain may also turn out to be an issue but we hope to make it past Saltese to St. Regis, hopefully all on back roads - stay tuned.

Today's Photo: In addition to our cell phones, we have a satellite phone (known as Sattie) along in case we need a phone and are out of cell range. Today's picture shows Riley just after he tested it out by calling our son Sven from the Stevens' Lake Trailhead on our way from Mullen to Lookout Pass.

For Those Who Want More: Ya already got all there is for today!
Posted by Riley and Becky at 6:31 PM