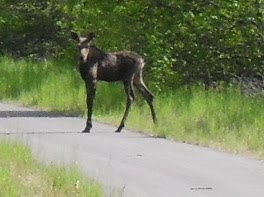 Just the Basics: 54 miles; one mountain pass (4th of July on I90 @ 3069 feet); about 1500 feet of climbing; two moose - both female; and a fabulous early dinner at the Moose Creek Grill in Kellogg before biking the final 12 miles to Wallace, where we arrived at about 8:30 p.m.

Tomorrow: We will almost certainly take a layover day in Wallace - a town we know and love from our biking vacation last fall. Our next biking day will take us over another pass and we are not wild about 2 passes in 2 days. More importantly, 7 hours of rain are predicted for tomorrow, with the following day much less likely to be rainy. Stay tuned!

Today's Picture: The moose speaks for herself. This is the first of two we saw not long after getting on the Trail of the Coeur D'Alenes out of Cataldo. We watched her cross the Coeur D'Alene River, amble up onto the bike trail and cross to a stream on the other side. We couldn't stop grinning!

For Those Who Want More: Here are some highlights.

Natural Beauty: Virtually every mile of today's ride we were surrounded by beauty, even when riding through or beside towns. This morning we rode along Lake Coeur D'Alene for much of the 10 miles or so before we got on I90 at Higgins's Point. I90 itself climbs through beautiful mixed forests of evergreens and deciduous trees. Once we left I90 we rode 6 miles along Canyon Road to Cataldo - a lightly travelled road through green mountain agricultural areas - forest interspersed with fields.

The Trail of the Coeur D'Alenes: At Cataldo we intersected the Trail of the Coeur D'Alenes, which we took all the way to Wallace. The trail is about 8 feet wide and very well paved with regular rest stops - typically, 2 benches and a picnic table with benches; an interpretive sign focused on natural history or local history, with a map; and, sometimes, restrooms. The surroundings are unfailingly lovely - wooded hills on every side, river or streams or vast wetlands at times, forest at others, sometimes small towns - REALLY nice.

The Mission Inn Restaurant, Cataldo: Last fall we rode this trail and stopped for pie at The Mission Inn Restaurant. Today as we climbed from Coeur D'Alene to the I90, then climbed the 4 miles of 6% grade to the pass, then descended a similar grade and made our way along, we kept promising ourselves we'd have pie in Cataldo. When we ate our picnic lunch right after getting off I90 we only had 1 cookie for dessert - because we were going to have pie in Cataldo!

When we got there they were out of pie - so we shared an excellent cinnamon roll. We also had a great time chatting with the waitress and a young man having a beer at the counter beside us. Among other things, he recommended that we stop and get at least something to eat at the Moose Creek Grill in Kellogg - he even gave us a coupon he had in his wallet for a a free serving of their famous artichoke dip appetizer, which he highly recommended - he said it was the best restaurant in the Silver Valley (this is silver mining country still today).

The Moose Creek Grill: Everything he promised and more. The hot artichoke Parmesan dip on little toasted baguettes was to die for. We shared two excellent entrees: linguine with artichokes, mushrooms, purple onion, spinach and sun-dried tomatoes in a sherry and olive oil sauce; and a lovely piece of salmon with a homemade pesto and almonds along with Parmesan-crusted mashed potatoes. We tried the two white wines they were featuring - a not-too-sweet Sauvignon Blanc and a not-too-dry Chardonnay - both lovely.

Evening Biking: After our early dinner in Kellogg we still had about 12-13 miles of biking to get to the Stardust Motel in Wallace. This was our first evening biking this trip and it was very nice riding along the trail in the cool air, slowly climbing to Wallace as the sun descended. At one point there was even a rainbow!
Posted by Riley and Becky at 9:50 PM