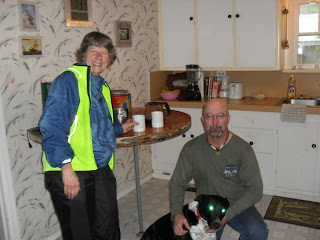 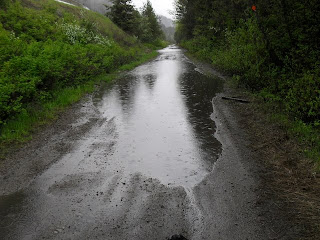 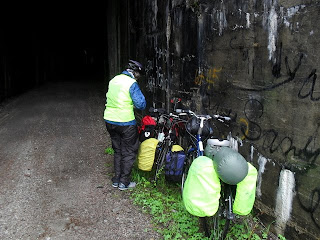 Just the Basics: We're in a new state - and a new time zone! Only 22 miles today - but those were pretty amazing! As indicated yesterday, we got up very early and biked about 7 miles from our motel in Kellogg, ID to Osburn, the next town, to the home of Mark Christiansen, the manager of the bike shop at Lookout Pass Lodge, to catch a ride with him back up to the Lodge to pick up where we left off yesterday.

We had some coffee, met his dog Gus, and had a great time talking with Mark about hunting and cowboying, life in general and, of course, flyfishing - check out his hand-tied flies at http://www.troutbumflyfishingco.com/

At the Lodge we had some breakfast, replaced a broken rearview mirror on Becky's bike, and got warm and dry - we rode from Kellogg to Osburn in the rain and were chilly and damp. Then we set off on forest roads for Saltese, where we had already made a reservation at the Mangold Motel.

It was QUITE the ride. We saw one or more deer five times and often rode beside glorious rushing streams and, eventually, the St. Regis River. All downhill from the pass, all in rain - sometimes quite heavy - and all on dirt road that was sometimes pretty good, at other times muddy, sometimes full of puddles and potholes, occasionally with patches of gravel too chunky to ride through - in a few words, we had a great time and were proud of our riding skills when we arrived unscathed in Saltese!

We knew it would be rainy, so bought sandwiches for lunch at the Lodge, figuring it might not be practical to stop and make peanut butter sandwiches in the rain. We actually had a break from rain as we stopped for lunch in a little clearing next to a river. There were 4 neat little gray birds in the midst of the river - they looked more like songbirds than water birds but were diving and swimming and coming up with things to eat, hopping out on rocks or snags, then diving in again - GREAT to watch!

Today's Photos: (1) Mark and Becky in Mark's kitchen; (2) Illustrative puddle; (3) Sheltering in a tunnel along the trail.
Tomorrow: Tomorrow we plan to go to St. Regis - about 25 miles - along the same forest road we followed to get to Saltese. Rain is not expected and the weather is supposed to be cool - nights are still below 40 in this area, and days in the 50s and 60s. If you wonder about the use of forest roads - there are several reasons: Primarily, we prefer to avoid freeways and other traffic-heavy roads when there is a viable option. Also, in this area, the roads are often on or near old railroad grades, so climbs are longer but gentler - the railroads were built with 2% grades. In addition, they typically pass through lovely scenery. We already have a reservation at the Super 8 Motel in Regis.

For Those Who Want More: Nothing more today.
Posted by Riley and Becky at 2:57 PM