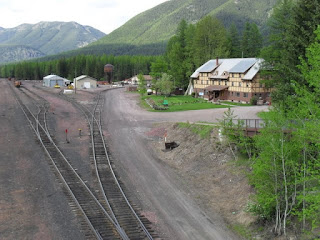 Just the Basics: We biked 30 miles today and climbed bout 1150 feet. We are ONE MILE short of 1000! We got on the road at 6:30 a.m. because we wanted to allow lots of time for riding safely - in this area Highway 2 has narrow shoulders and is curvy so we knew we'd be stopping a lot to let traffic pass and perhaps be frequently walking the bikes on curves, et cetera. We also wanted to get a jump on much of the traffic by starting very early.

It actually went very smoothly. Starting early seemed to help - traffic was pretty light for the first 1 - 2 hours. Also, there was often no real PAVED shoulder but often there was pretty good gravel shoulder, allowing us to get as far from traffic as the occasion warranted.

We did a fair amount of hopping off and some walking, but also lucked out - there was a 10 mile area where roadwork was going on. That may not sound lucky, but it was - it meant traffic was slower in many areas and there was a 1-2 mile area where it was down to 1 lane, with pilot cars guiding folks through in a single direction. This meant we often had the road entirely to ourselves, and for some time after we got through the traffic behind us came through in widely spaced batches as lines of cars were piloted through, so we still had long periods when there was no traffic behind us. = ) = )

Today's Photo: The Izaak Walton Inn where we are staying tonight.

Tomorrow: Barring the unforeseen, we will cross the Continental Divide tomorrow, at Marias Pass. We will climb 1700 feet and travel about 30 miles. We will be spending the night in East Glacier. (Note: Here, and in general, when we quote climbs we are talking about total climb, not net.) Marias Pass is the lowest pass across the Continental Divide north of New Mexico. It was almost discovered by Lewis (of Lewis and Clark), when he made an exploratory side trip up the Marias River as part of his return trip from the Pacific. But the pass was hidden by clouds!

It was not discovered by white men until more than 80 years later, with the help of a Blackfoot guide.
For Those Who Want More:

The Ones That Got Away: We stopped for pie and coffee today at the Stanton Creek Lodge 16 miles east of West Glacier - they had coffee, but no baked goods, so we got a Butterfinger candy bar to go with our coffee. We got to chatting with the bartender about how business was going - OK for this time of year - and about our trip. His name is Chris Kupka and he and his Grandpa Jerry own the place.

Chris had gone fishing the day before at Stanton Lake and caught 29 fish, including a Cutthroat trout that weighed 5 lbs. after it was cleaned! He asked if we liked fish - we said we did. He then presented us with two frozen fish wrapped in foil - said to just toss 'em in a campfire! Sadly, we will not be camping tonight so we had to decline them, with many thanks. He then charged us $0.50 for the candy bar and gave us the coffee for free! The world is loaded with great people. As we left, he told us to ride safely and said "God bless you."

The Izak Walton Inn: Tonight we're at the Izak Walton Inn in Essex. The Inn was built by the Great Northern Railroad in 1939 to house and feed railroad workers - a large crew wintered over here to keep the rails plowed, and extra engines and crews were also needed to get trains up the steep grade from West Glacier; they too were quartered here. It's a wonderful Craftsman-style building with a huge stone fireplace, lots of rustic furnishings and touches, beautiful wood paneling and wonderful railroad decor - the lamps in the room are mainly made of iron spikes, for example, and the bedspreads are striped like engineers' overalls and caps.

Riley Takes a Hike: About three miles along a forest road rising behind the Inn, and part way along a trail to Marion Lake. Very nice chat with a forest ranger along the way.