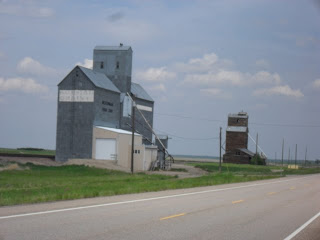 Just the Basics: 44 miles today and a fairly trying day. We knew the riding conditions would be tough so planned an early start which meant a picnic breakfast in our motel room - nothing open in Shelby before 8 on Sundays. We had bought some stuffed eggs, grapefruit and cinnamon rolls in the local Albertson's. As you may know, those little fridges in motels aren't too great and the egg whites froze! We cracked the ice off the surfaces of the whites and ate them anyway - nothing we'd recommend, but the grapefruit, coffee & cinnamon rolls were tasty!

We had headwinds for a good chunk of the ride and this stretch of U.S. 2 has minimal shoulders for the first 30-35 miles. Worse yet, for a considerable section there are rumble strips in the shoulder which are not good to ride on - and there was a fair amount of traffic. We had to stay very focused and frequently stopped to let traffic pass whenever we thought there was any safety reason to do so.

Mosquitoes have also joined the tour so for the present, no more pleasant roadside picnics and rest stops - if there's grass or other vegetation, there are mosquitoes. We stopped for lunch in a pull-off area so we could be off the road but also far from grass, but there were so many red ants on the pavement we made and ate our lunch standing up and walking around. We did have one nice rest stop - we sat on a cement curb in the shade of some grain-storage tanks in the middle of a big dirt/gravel area (no grass - no mosquitoes) and shared an apple and a melted Snickers - and felt very cheerful!

Today's Picture: Grain elevators near Lothair, MT. We see numbers of elevators like this every day up here in Montana's High Line Country. Lothair has a post office but no other services - it's really just a wide spot in the road.

Tomorrow: Remains to be seen. The next town with a motel is Havre (say Have-er), which is 60 miles from here! That is also our first chance at a bike shop where we hope they can fix Riley's gear problems and sell us a new rear tire for his bike and more thorn-resistant tubes.

The weather is supposed to be mostly OK and there are supposed to be wide shoulders on U.S. 2 all the way, and in the first 32 miles there are 4 little towns where you can get something to eat. We hope to make the 60 in one day, but if that turns out not to be practical we will plan to camp in either Joplin (mile 10) or Higham (mile 32). In either case we would be camping in a city park, so probably no possibility of blogging. There's also a grocery store in Higham, and getting water should not be a problem in a city park. = )

For Those Who Want More: Hopefully, more will be coming soon, but not tonight - we've a long day tomorrow and need to hit the hay.
Posted by Riley and Becky at 7:40 PM