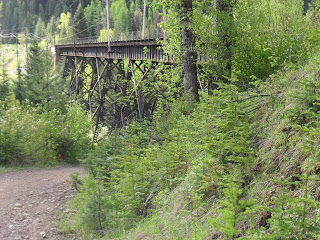 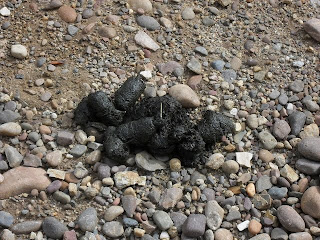 Just the Basics: 26 miles and about 1000 feet of climbing. Today ends our fourth week - we have come 800 miles, surprising ourselves by averaging 200 miles per week this early in our trip and with all the climbing required. We hope to be in Whitefish, MT on Wednesday, ready to launch our push over the Continental Divide and past our 1000 mile mark - we'll see!

Today's ride was GREAT! We began by pushing our bikes up a very steep dirt road out of Saltese to a road which was created over the old Hiawatha (Milwaukee) Railroad right of way - beginning by crossing the trestle pictured here. Then about 6 miles of VERY roughly graveled dirt road to Haugen, where we stopped for a real breakfast, having had only Luna Bars and coffee in our motel in Saltese. We had planned to go all the way to St. Regis on this forest road but it was SO rough we decided on Plan B.

The next 3 miles or so were on a paved frontage road from Haugen to DeBorgia, followed by 3 miles on I90 to Henderson, where we picked up old US 10 all the way to St. Regis; this road is also known as Camelback - you gradually climb 1000 feet over 6 miles, then descend at a mostly similarly gradual grade for 6 miles into St. Regis. The road was very lightly traveled and entirely through wonderful forest, dominated by firs. At lunch and rest stops we saw yellow glacier lilies, wild strawberries, trillium, dandelions, balsam root, violets - and more!

Tomorrow: Another layover day due to weather - the forecast is for 0.64 inches of rain, with a potential thunderstorm. The road we start on will be curvy and we need to make about 50 miles, so tomorrow is not likely to be the right day for that ride.

Today's Photos: (1) The trestle out of Saltese; and (2) Fresh bear scat on the Hiawatha forest road - shortly after Riley spotted a black bear on the hillside above us!!

For Those Who Want More:
Big Sky Country: It is true what they say - Montana is Big Sky Country! Particularly as we look north from St. Regis the sky appears so immense we imagine the world to be a bigger place than we thought! There are many clouds, of all types, mostly white, and holding them the bluest sky you could ever imagine.

Finding Our Route: We are still "between" the Adventure Cycling Lewis and Clark and Northern Tier Cross-Country routes, so finding our way on our own. Riley is carrying a variety of maps and we do a lot of talking to local folks, as well. He also makes great use of Google maps.
Today's route represents contributions from:

(1) The couple managing the motel in Saltese - they told us that a group of bikers had come through going west over the forest road we proposed to travel and the husband (a biker) confirmed that the graders had been through recently so we should not find any rocks or fallen trees, etc. blocking our way.

(2) The morning clerk at the motel, who told us about the Camelback route - she said it was a climb but very pretty (and of course there'd also be the downward swoop that followed) - and warned us to remember that cars were on the road even though it might begin to seem like there weren't any!

(3) The cashier at the 50,000 Silver Dollar truck stop restaurant in Haugen, who told us we could take the frontage road to De Borgia - and a staff person at a restaurant down the road who confirmed that.

Dealing With Rain: We are doing better on this score than on previous bike tours because we have a lot of our stuff in ultra-light waterproof bags and Riley's new rear panniers are fancy Ortlieb water-proof ones. Riley's front panniers & Becky's rear panniers have pretty decent covers (kind of like shower-caps or bowl covers, they have elasticized edges and are pulled around and over the panniers). That said, we are not at 100% dry, or anything like it, as our very rainy Friday ride revealed.
Becky's front panniers have no rain protection and the 4 panniers that just have covers did a fair job of protecting our stuff but they still got pretty wet - as did some of the stuff in them. We were in a tiny motel room in Saltese so we had drying stuff everywhere, with a clothesline Riley rigged which required us to exercise extreme care in getting up to use the bathroom at night - et cetera! We were aware of these issues and packed with the possibility of getting some stuff wet in mind, but will definitely expend some more effort on keeping stuff drier in future!
Bike Stuff: As we were riding up Camelback, Becky's 2nd lowest gear in the back began acting up. Every time she shifted into it, there were repeated sudden lurches in the gearing, which we now think is due to a defective cog in the cluster - perhaps due to all the rough roads in the past few days. Riley spent a long time working on it but in the end, she's avoiding that gear and we'll have it checked out at the bike shop in Whitefish.
Posted by Riley and Becky at 6:52 PM