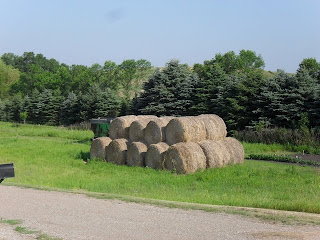 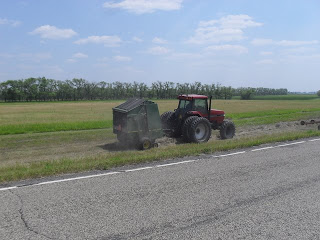 Just the Basics:
Monday, 7/12/10: 39 miles, 1894 total to date! We've had a good day - albeit tough riding against the wind almost all day - and are safely into Cooperstown (pop 1100). Due to predicted thunderstorms, heavy rain, hail, possible tornadoes and other stuff like that tomorrow we will take a layover day tomorrow and catch you up in tomorrow's blog!

Goodnight!
Tuesday, 7/13/10: Holding in Place in Cooperstown; no biking at all today - slept in a bit and are enjoying fixing our own meals.
We have a sort of suite at the West Side Motel here in Cooperstown - a clean, simple place but with BR, bath, LR & kitchen - all for about $65! Gordon Overbee (sp?), a retired farmer whom we met in the tiny town of Binford (pop 200) where we had lunch yesterday - see below - suggested this motel to us and we got the last room!
We've spent most of the day on planning and correspondence, with a brief walk to town to the drugstore for a birthday card for Aunt Ruth, turning 101 soon, and Telfa pads for Becky's finger, and for sunscreen - neither of which the town grocery had when we shopped yesterday. Got the card and the sunscreen, but no dice on the Telfa pads. We have some that are too big, but can cut them down to fit; no worries - the finger continues to heal very well.

Today's Photos: These were both taken on 7/12 along ND 1 between the turn-off for Binford and the place where 1 joins ND 200. See Hay, below.

Tomorrow: Assuming the storm abates (if it ever really materializes), we'll bike 36 miles to Page, ND, where we'll have to camp - no motels between here and Fargo, which is another 52 miles beyond Page! We expect fairly decent riding conditions for the next 2 days (although we will likely get rained on tomorrow) and then not-so-good, so want to get to Fargo by Thursday night; then we'll see.

For Those Who Want More:
Lunch in Binford: We stopped for lunch about 1 mile off route yesterday at Binford, the one town between Pekin and Cooperstown. We had a good lunch at the local cafe - the lunch buffet: hamburger stroganoff, mashed potatoes, cooked veggie medley, homemade chicken noodle soup and coffee.
Two important signs on the door: One announced that on July 13th (?) they'd be serving Kumla (Norwegian potato dumplings) from 4 p.m to closing. The 2nd stated that if there were any problems to please contact the owners, not the city - if we understood the explanation for that correctly, it sounds like the city's economic development commission is involved in the cafe (financing?) and when it first got under way lots of work needed to be done on the place and the city got complaints. We had no complaints!
Gordon Overbee (sp?), 81 Year Old Retired Farmer: We first met Gordon in the cafe; as is our wont, we asked, generally, if anyone had suggestions as to which of Cooperstown's 3 motels we should try for, and Gordon suggested the West Side where we, indeed, happily stayed.
After we left we found a bright blue adult 3-wheeled bike parked next to ours. As we got ready to leave, its owner emerged - it was Gordon, and we had a great chat. Here are some highlights:
Gordon owned 6 quarter-sections (160 acres each) outside town - the fifth generation of his family to farm it. Gordon was born on the farm and he and his wife raised 5 sons there (she used to joke that she was raising 6 boys, including Gordon in that number). When the kids were growing up they had a dairy herd; later mainly growing hay and perhaps other crops - we can't recall.
Here, as elsewhere, the trend is to LARGE farms, and Gordon's farm, not big by current standards, was certainly too small to divide and none of the boys really wanted to farm anyway, but he hated the thought of selling it to an agri-busines farm or a hunting club or other owner who would tear down the farmstead and erase its identity. His wife is now in a nursing home and when he wanted to retire and move to town he had the land in a government conservation program of some kind - although retaining ownership and with the right to take it out of the program at the end of 8 years (not sure when that time will be). Happily, a young local couple wanted to buy it! He gave them a good price and they bought the farmstead, although not the bulk of the land. The wife works in town but the young man is helping his dad (her dad?) farm their farm and they already have a beef herd of their own - and first right of refusal when it comes time for Gordon's land to be sold. A really lovely story which this summary only partially captures.
We also talked about kids and grand kids and biking, and Riley's and my jobs . . . one of those very special conversations that are such an important part of our trip. It also turns out that one of Gordon's sons lives in the Tri-Cities.
We had lots of questions about hay and haying for Gordon -we're writing separately about hay, but much of what we say came from Gordon - subject to our failure to remember things accurately, of course!
Hay: We have talked about hay before; here's some more - we hope we have correctly reported things we heard from Gordon. Yesterday we were lucky enough to watch a tractor-pulled baler for making cylindrical bales in action, gathering up long windrows of mown hay following a tractor-pulled rake which was drawing the cut hay into a windrow as it went along.
Gordon told us that it gets cold so early here that farmers may need to start feeding hay in mid-October; once there's a freeze the local hay pretty much dies, unlike MT hay which he says retains it nutritional value after a freeze.
We asked how much hay cows need - we THINK he said that one of the big cylindrical bales might feed 8 cattle for 1 day. We asked how the bale is used - he described 2 methods but we gather there are more: (1) The bale is dropped into a rack in the middle of those circular feeders you see that look sort of like an old-style playground merry-go-round - the cattle pull hay off of it. (2) You have a machine which breaks up the bale - the farmer attaches the machine to a tractor, drops in a bale and drives through a field leaving a trail of cut hay behind; the cattle follow along and eat.
Wikipedia has a video of one of the cylindrical balers working and some more info on haying. We are still not totally clear on the basic structure of the baling machine and hope to go to a farm equipment store for further research!
Posted by Riley and Becky at 7:31 PM