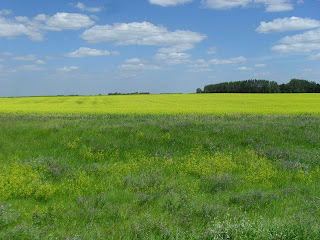 Just the Basics: 47 happy miles! The first 28 were on U.S. 2 from Devil's Lake to Lakota - wide, paved shoulders all the way. After a fine lunch at Sun-Lac Inn - Ruben sandwiches and very good fries, and coffee - we walked to the nearby DQ for a shared banana split. Then 18 miles on ND 1 and 1 on ND 15 - generally no shoulders but lightly-traveled country roads with very long straight areas with great visibility - PLENTY of time to pull off whenever that was indicated. The wind was NNW - the NW part helped some on U.S. 2 and the N component was a GREAT tail wind on ND 1.

The countryside continued to be agricultural - green pastures, fields of corn, and fields of canola predominated. It is gently rolling - we have also been seeing more and more trees the past few days, both conifers and deciduous trees. We saw lots of daisies today, and quite a bit of showy milkweed, and a new little legume - yellow flowers - perhaps a vetch? We also saw lots of flooded areas everywhere, although no flooding on the roads we were on - we did see a flooded side road off of 2, however. We also saw fields with flooded edges and/or low-spots that were either still flooded, or muddy, or simply bare, although surrounded by growing crops.

Today's Photo: A field of canola along ND 1 between Lakota and Pekin

Tomorrow: 36 miles to Cooperstown along ND 1 and ND 1/200 to Cooperstown. There are 3 motels - we know nothing about them or about Cooperstown, but if we can get a decent room we may layover there for a day on Tuesday - the wind direction will be bad that day and there is a high probability of several hours of rain and a thunderstorm.

For Those Who Want More:
Hay: We have been seeing 1-3 of those big, cylindrical bales of hay at random spots along the road for several days. Since they never occurred in large numbers, it was hard to imagine someone had actually grown the hay there and we began to wonder if farmers or the highway department had brought them there for some unknown purpose. We happened to mention this to the farmer we met in the bar in Leeds 2 days ago - no, he said, it's been so wet the crop has been poor and folks are afraid they won't have enough hay, so they mow whatever bits they have - sometimes along flooded fields. Sure enough, yesterday we saw a tractor with a sort of prong on the front picking up the bales alongside the road and loading them into a medium-sized truck. We continued to see similarly isolated bales today.

The Prairie View Lodge in Pekin: Pekin is a tiny town - there is no restaurant and, possibly, no grocery store. The motel has perhaps 10 rooms which are really like studio apartments - ours has a stove, fridge, microwave, coffee pot, dishes and toaster. It's a pretty informal place - the laundry room and linen closet for the motel are ALSO in our room. We arrived to find other guests who showed us the envelope with our key in it - I asked about paying and they said it would probably say something about that in the envelope (it did: $52. 35 for all this). The guys who greeted us showed us the room, and took me to a bathroom on the hall with a tub and a locking door in case I wanted a bath instead of the shower in our room. One of the guys had a beer and I asked if there was a place to buy one locally - he said no - 15 minutes later he showed up with a gift of 2 cans of Coors Light!

We were told to leave money & key in the office or in the drop-box outside our room. We later saw the hostess - she needed to get in for clean sheets and to get stuff out of the washer and dryer. She said they've always operated on the honor principle and sometimes don't even see the guests at all - one guy stayed there 4 times before they met him! The motel sells pop and small frozen pizzas - again, just leave the money in the office. One of the 2 pizzas on hand was in our fridge - the owner got the other one from the office for us. We used fruit we had with us to make a nice apple/orange/date salad and with motel pizza and our across-the-hall-neighbor's beer we had a fine dinner.

We asked the hostess who stays here at the motel. She said that when they built it they thought it would be mainly hunters and fishermen, and they do get those, but they also get some cyclists (they are listed on our Adventure Cycling map for this area) and a lot of folks returning to the area for family reunions and the like. The owners live in a near-by town and grew up here.

How to use the Missouri River? We learn interesting things from local newspapers as we tour.
Today we read an op-ed by one of North Dakota's senators, calling for a federal panel to re-assess regulations on shared use of the Missouri by the states through which it flows. It seems that old agreements established in the 30's require sufficient flow to support barge traffic in the river's lower reaches - at the expense of water availability to states like North Dakota. The writer points out that barge traffic is now negligible - only a couple of barges on the river each day, carrying low-value goods like sand and gravel, and for distances of only about 10 miles. So, says the Senator, the regulations should be reconsidered! - an idea he admits is disliked by downstream states.
Posted by Riley and Becky at 4:12 PM