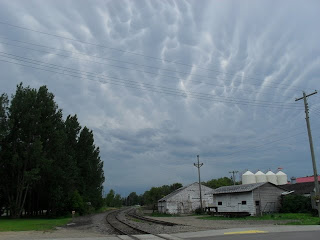 Just the Basics: This is the end of our 11th week on the road - it's sort of hard to believe. In some ways it feels like a very short time - in other ways it has become a way of life. 33 miles today - and lots of walking in Baxter; 237 miles for the week; 2271 for the trip! This puts us enough over 200/week to feel that we are on target in terms of a steady movement eastward - the extra 71 miles sort of "erase" side-trips in towns, etc.

We are at a Super 8 in Baxter and will layover here tomorrow (7/25), as well, to avoid biking in the Mille Lacs resort area on a Sunday.

Sadly, we are at the end of the wonderful Paul Bunyan State Multi-Use Trail. It has been a positive delight! Not just because it is paved and off road and because of all the interesting places we've visited and folks we have met, but also because of the astounding natural beauty. Except for the brief sections in the small towns along the way, the Trail is primarily through the forest, with some agricultural areas interspersed - see Nature Notes, below.

If it is possible to have a vacation while on such an extended vacation - today felt like that! We slept until nearly 8, ate a light motel breakfast and headed out. 9 miles later we made an early stop in Pequot Lakes in our never-ending search for pie (we weren't sure if there were any eats ahead). Turned out to be a great little resort town - we strolled around, then went to the Tiki restaurant, still thinking pie, and ended up splitting a lovely bowl of Hungarian mushroom soup (think stroganoff in a bowl) and a delicious chicken cashew croissant sandwich on a lovely screened-in porch.

A few miles later we passed through Nisswa and Becky spotted the Historic Pioneer Village Museum and suggested another stop (see Nisswa's Historic Pioneer Village Museum, below). Afterwards we noticed an A &W across the street and shared a root beer float - sadly, a sign announced that today they would be using paper cups, not the traditional glass mugs we remember from our childhoods - perhaps they were too busy to manage the dishwashing; it is the height of the tourist season is this beautiful Northwoods lakes area.

An hour or more later we were on the trail again, with a stop for water in Merrifield and then a bit of wandering around in Baxter, trying to find our motel - but we were still checked in before 4 p.m. After a shower, we set out to find Book World, a big bookstore a mile or so down the road. A sudden drenching shower soaked us and we took refuge in a diner for hot tea - and, of course, pie (yummy rhubarb custard)! Then on to the bookstore.

We failed to find what we sought - a good, readable, fairly brief general history of the United States - has anyone got a favorite to suggest? Reading about Lewis & Clark in Ambrose's Undaunted Courage; then Lewis & Clark Through Indian Eyes; then These Thousand Hills by A. B. Guthrie, Jr., a fictionalized account of settling MT; and now Rolvaag's Giants in the Earth about the Norwegian immigrants who helped settle the Dakotas has got us wishing we remembered more American history - the Missouri Compromise, the Kansas-Nebraska Act, the Northwest Ordinance - you get the idea! Since we couldn't find such a book, we bought today's paper, some maps and this week's Economist. Riley has returned to reading Half the Sky on our Kindle, which he never finished, and Becky has just started Giants in the Earth, and we'll look for a history book in the Twin Cities.

Then a leisurely dinner at Grizzly's - a Northwest chain we've come to know and like - and back to the motel to blog and read! Sound like vacation to you?

Today's Photo: We didn't take any, but are posting one we took in Hitterdal on July 17th - we were on our way back to the B & B after our visit to the Erickson farm and there was a tornado watch - Wanda said the sky had "wind clouds" - and also told us how to get into the B & B's storm cellar, if the occasion arose!

For Those Who Want More:
Nisswa's Historic Pioneer Village Museum: This is a great place - we've been in lots of museums of this sort on our trip - indeed, Riley later confessed that when Becky proposed stopping he secretly thought "I've seen all the cream separators I need to see!" - but this one stands out! There's a very nice little History Center, and a restored train station and caboose across the street. The Village includes a one-room schoolhouse, a livery stable full of a variety of wagons and cars and such, a bank, Swedish, Norwegian & German homesteader's homes and a more generic homestead house. The signage is clear and easy to read, the rooms are not over cluttered - lots of detail and interesting items, but it's also possible to actually imagine real people living there - et cetera; a real treat and we had a good time chatting with volunteer staff, as well.

Encounters on the Trail: We had a nice long conversation with another cycling couple about our age - Betsy and Glen, who live near the Twin Cities but are vacationing up here. Glen agreed that our planned route back to the Adventure Cycling route made sense and we had a generally good time sharing cycling stories. Many people cycle on the Paul Bunyan Trail and it is not uncommon for folks to be making loop trips and to pass us 2x in a day as they go back and forth - often saying "Hi, Again" or even "We saw you 2 days ago in . . . !"

Nature Notes: The Northwoods are amazing. We ride past lake after lake and slough after slough, and cross wonderful rivers, and pass fields of corn, meadows with cows, little resort towns, and, most of all, bike through mile after mile of mixed forest and wildflowers. Today we have especially noticed the oak trees. We're also trying to learn new flowers: we can definitely identify Common Mullein, Birds-Foot Trefoil, and White Campion, now, and continue to see the milkweeds and clovers and cone flowers we loved on the prairie - and a host of others we're hoping to pin down! We also see squirrels and chipmunks, an occasional deer and many songbirds and gulls.
Posted by Riley and Becky at 6:29 PM