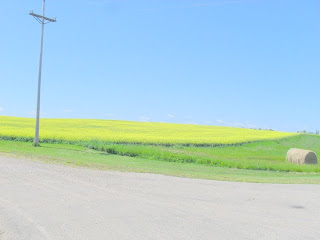 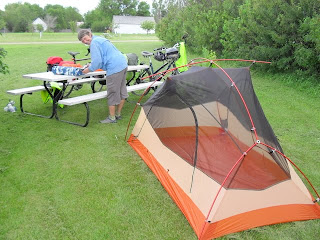 Just the Basics: 26 lovely miles along U.S. 2 with wide, wonderful paved shoulders for all but about the last mile - alas, tomorrow it appears we'll be back on nasty narrow shoulders nearly filled with the rumble strip, with rough gravel beyond. It is still possible to ride safely in these circumstances, it just means constantly being on high alert and frequent stops to allow traffic to pass whenever that seems indicated. The gravel is wreaking havoc on our tires; we had to replace Becky's rear tire today and we are hoping that Riley's rear tire will make it to Fargo, the next town with a bike shop!

Lovely scenery again today - very gently rolling terrain, green fields interspersed with golden fields of canola, clear blue sky. We think we are in a potholes region - the area is studded with what appear to be tiny lakes like the potholes area of WA, near Othello, for example - trimmed with cattails and decorated by the occasional waterbird, they are lovely to see. Today we saw 4 white pelicans on one of the larger little lakes.

We are camping again tonight, at Jan's Stall Mall & RV Park in Leeds. So far, there are 2 RVs and us; we are tucked up in a secluded corner with our own picnic table and not far from the porta-potty. = )

We knew there was a cafe in town which closed at 2 - at first we had no idea of having lunch there - we didn't even start riding until 10:30 this morning and we took a rest stop at a very nice ND State roadside rest, but as we got close to town we realized we might make it and rushed along. Once in town we couldn't find it but a passerby gave directions and we arrived at 1: 50. We asked how they felt about 2 more guests 10 minutes before closing time - they said come on in.

We had nice chicken fiesta (?) salads - freshly cooked strips of chicken breast, pineapple chunks, mandarin oranges, chopped tomatoes, etc. on a bed of crisp lettuce - very tasty. For dessert: bread pudding with vanilla sauce. YUM! The restaurant is keeping a list of cyclists who come by - names, jumping off point and date, and planned destination. Ours was the 5th group of names on the list - and we had met 2 of the other groups, both of which were westward-bound: Kathi and John from WI, and a couple from Belgium whose names we failed to get when we met them and couldn't read on this list, either!

This is also a good place to note another cycling pair we met some days back and keep forgetting to mention: Mitch and Ryan, a cheerful father-son pair riding from Anacortes to CT - before they started they were also checking out colleges for the son - a senior in high school this year. Their blog has a great name: http://www.numbunz.wordpress.com/

We're blogging sitting at the picnic table outside our tent; the light is a bit tricky and sometimes the computer is very slow, so we may end up finishing later. We also need to get to the grocery store and have been told it probably closes at 6, which we have found to be typical in small towns - we understand Leeds has 600 - 800 folks.

Today's Photos: (1) Scenery; (2) Our tent without the fly - isn't it pleasant and airy-looking?

Tomorrow: About 33 miles along U.S. 2 to the Fireside Inn at Devil's Lake, ND

For Those Who Want More: It looks somewhat like rain, so we're going to post now and get things squared away just in case, but we may be back!

Thunderstorm from the Tent: As we noted when we signed off yesterday, a storm was coming - and did it ever! It was a real thunderstorm - wind, heavy rain, lightning, thunder - the works! We nestled into our tent and left a door in the fly open to watch - on the side that wasn't being battered by the wind - and enjoyed the show, counted the seconds between lightning and thunder, and stayed perfectly dry.

Our 1st Camp Dinner: We have cooked our first camp dinner - Kraft Deluxe Mac & Cheese and a can of stewed tomatoes (unheated). YUM!

The Farmer in the Bar: After the thunderstorm we rode back into town (a short distance) and to the Last Resort bar, where we enjoyed Amber Bock - the only dark beer most bars in little towns around here seem to have. We chatted with the bartender and the fellow next to us at the bar. We asked how flax was doing - they agreed that the heavy rain meant a late start and a less promising crop. We said how much we liked seeing the purple flax and yellow canola in bloom - the bartender told us her daughter had her senior picture taken against flax and canola - adding "She's a tomboy."

We had a very good chat with the farmer - here are some things we remember: