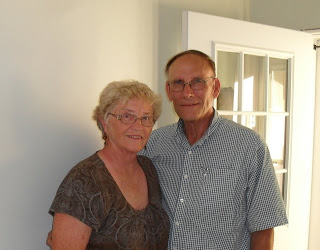 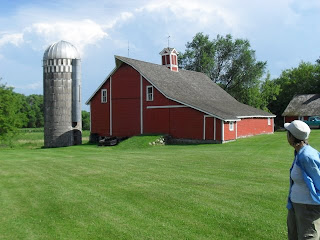 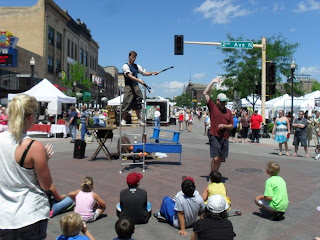 Just the Basics: NOTE on 7/22/10: We had a GREAT time in Hitterdal and really wanted to do it justice - but struggled with Internet connections in recent days. Finally, we've gotten it done today on our layover day in Walker, MN. Enjoy!
7/16: 40 miles today, 225 for the week so far, and 2033 for the trip, putting us 33 miles over our target of 200/week. We had a great day and will plan to tell you all about it later - assuming our Internet connection holds. We're at a lovely B and B in the tiny (pop 201) town of Hitterdal and plan to stay here tomorrow, too, so should have time to catch up on our blogging tomorrow.

This is the only lodging available between Fargo/Moorhead and a lakes region about another 40 miles from here! Right now we'd like to shower and get to the local bar for dinner (the only game in town except for pizza at the convenience store).

We'll be back later - possibly tonight!

Scheels AllSports, Fargo: We both needed new rear bike tires - we'd replaced our worn-out ones but had to make-do with fairly light-weight tires, since that was all we could find when we needed 'em. Riley had called ahead to bike shops in Fargo and found what we wanted at Scheels so we'd picked our motel in Fargo based on proximity to Scheels and were there bright and early on the 16th. What an amazing store! It is HUGE and really does seem to cover all sports, as well as having a large L.L. Bean sort of section devoted to upscale "Northwest Cabin Decor" sort of stuff. It's so big the manager gets around on a Segway!

More than that, it has wonderful staff - everyone was super helpful. The bikes were quickly re-tired, they cleaned the chains, they did a great job of rolling up the tires they removed (for use as spares) and using cable ties to make them very compact for easy storage in our panniers. They had no small bottles of chain cleaner for sale - so they poured some into a small bottle and provided it for free. When the bikes were ready, they came and found us in the store. They told us about a local summerfest we might want to see - in fact, the guy who knew about it was on the phone as we were leaving the bike area, but when he got off the phone the bike manager got the details and came and found us at the check-out stand to tell us. You get the idea!
The Fargo Street Fair: After our great time at Scheels we went on to Target for a bunch of routine shopping, then packed up and headed for Fargo's famous street fair downtown. We wandered around, watched a juggler (see photos), saw lots of craft booths and ate corn dogs and roasted corn and a Scandinavian pastry that sort of reminded us of flour tortillas with butter, sugar and cinnamon -can't remember the name right now! We also drank a TON of lemonade, as it was really hot.
We finally left for the ride to Hitterdal around 3 p.m.!
The Heritage Road B & B: We've already given contact info for this great B & B, but here are some more details. It's located in an old building on the main street in Hitterdal. The owners, Wanda and Carl Erickson, bought the building a few years ago, tore down pretty much everything but the exterior walls, and started over. They did all the work themselves. There are 2 charming bedrooms, each with a private bath (one has a fireplace!), and a very nice little kitchen between them - Carl and Wanda live on their farm out of town, so come to the B & B in the morning to prepare breakfast for their guests, so they need a real kitchen; they also have a laundry alcove to avoid needing to lug laundry back and forth. Wanda has decorated it beautifully, with lots of Scandinavian touches - her family is Norwegian and there are photos on the walls which Wanda took of Norway on hers and Carl's visits there.
Liz and Jerry: Liz and Jerry were the guests in the other bedroom the 1st night we were there. They had come to attend the county fair - county fairs are their hobby. They live in Wright County and in the Wright County Fair Liz enters: flowers, vegetables, canned goods, needlework - and dozens of baked goods - every year. She also assists the judges! And no, she is not a full-time housewife, she works full-time in Customer Service for Cargill - absolutely amazing! Jerry has been in construction all his life, primarily carpentry, and is one of the many Americans suffering in this recession. He lost his job and is still looking - even the train-for-a-new-career slots all seem to have waiting lists. In the meantime, he volunteers for the church, keeps the home fires burning, and has even been on a mission trip to the Philippines to build houses there - so many people like Jerry are still struggling; somehow, the recovery efforts need to reach them, not just Wall Street folks.

Wanda and Carl Erickson: We were privileged to spend quite a bit of time with the Ericksons - we saw them at breakfast, of course, and met Wanda's sister and her friend who were staying with them. On Saturday, like Liz and Jerry, they also went to the Fair, but before they left after breakfast they suggested that we bike out to the farm in the afternoon if we'd like to see the barn and Wanda's flower gardens. We really wanted to go but were afraid we'd be imposing too much - but around 3 Wanda called and said that they were back from the Fair and Carl was putting the coffee on. She said they'd realized it would be a lot of biking for us to come out and the weather was threatening - so she was going to come get us if we'd like to come! We happily accepted and were soon on our way. We can't possibly give a full report on the visit, but here are some highlights:
* The Farm: Carl's grandfather homesteaded the farm - the first winter he and his wife, 2 kids and 2 cows lived in a dugout, where their 3rd child was born. The next year they built the center portion of the big house where Carl and Wanda live today.
* The Barn: His grandfather and neighbors built the barn - it's huge and beautifully made, with carefully mortised joints, the use of wooden pegs in some parts, and so on. Before the barn was assembled, Carl's grandfather had carefully cut all the components and laid them out in the order that they would be needed. The cows lived in a basement floor, with a main floor and then a hay loft above. They were dairy farmers.
At Carl's mother's funeral some years ago, the family decided to fix up the barn and gathered the next summer to re-paint and repair it. Wanda also took many wonderful pictures of it and they entered it in Minnesota's 2009 Barn of the Year contest - part of an effort to preserve the farming heritage of the state. They won 1st place and the barn was featured on the cover and inside of the annual calendar produced as part of the contest; there is a particularly nice photo Wanda took of the barn through a cobweb covered with dew.
* Wanda's Gardens: Wanda has scattered many flowerbeds across the yard, with lovely plantings and whimsical decorations - a new favorite approach involves placing assemblages of "found" items (especially old glass dishes) on top of copper stakes and letting them weather in the sun, producing lovely, bronzed glass. One flower bed incorporated an old bathtub, and the head and foot ends of an old iron crib Wanda found in someone's trash have found new life as supports for climbing vines. Lovely.
* Farming Childhoods: Carl grew up on the farm, starting to milk and drive the tractor at age 6! He told a wonderful story about an uncle coming up to try to find someone to drive a tractor pulling something as he followed behind - planting, maybe? No men were available, so Carl's Dad said he could take 6 year old Carl to do it - which he did!
* The House: Over the years the family added to the house and Carl and Wanda have done lots of work on it - it is lovely and welcoming. Recent projects include winterizing what was once a screened-in porch to make a lovely, year-round sunroom, and doing a great renovation of a bathroom - including building a special alcove for a wonderful old oak dresser too big to get up the stairs into a bedroom. They have also built a lovely, airy gazebo outside; we sat there and ate cake and ice cream left over from Carl and Wanda's recent 50th anniversary celebration and drank lots of coffee and talked and talked. We are reading Giants in the Earth by Rolvaag, which tells of the struggles of Norwegian immigrants in this area at the same time that Carl's and Wanda's grandparents were settling here; the time we spent with the Erickson's greatly enriched our experience of this book.
* Talking: We had lots of conversation about farming, of course, including a discussion of the pluses and minuses of the federal Crop Rotation Program (CRP) which pays farmers to keep land out of cultivation.
We talked about the Holocaust - they once hosted Benny Hochman, a Holocaust survivor who wrote From Hill to Here, about his experiences - he had come to town to talk with high school students about the Holocaust.
We talked about our families - Wanda is the youngest of 13! - and about our children and about growing up in our generation vs. today. We talked about farming - like so many farmers, Carl farmed but also needed a day job - he ran a TV repair business for many years, and when the big stores began drying up that market he began working with computers, instead. Today they are both retired and rent the farm to someone who farms it. None of their children are likely to farm - they all have their own professions - although 2 grandsons might like to do it some day.
And so much more.
Posted by Riley and Becky at 5:34 PM