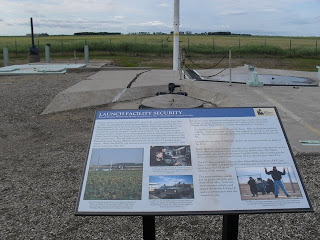 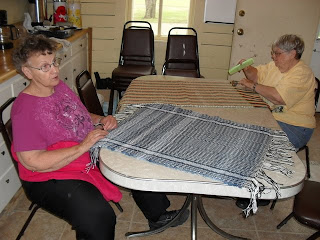 Just the Basics: 42 miles and lots of big wind - sometimes at our backs, sometimes from the side. We're proud of ourselves for coping with the wind!

We left Cooperstown quite late - got to bed late last night and were awakened - finally - by the promised BIG STORM in the middle of the night; lots of thunder, lightning and rain.

About 2 miles out of Cooperstown we stopped at what was once a Minuteman Missile Site - now maintained as a historical site and interpretive center by the ND Historical Society - see below.

We had a very nice lunch stop in the little town of Hope (pop 303) at about mile 27. We had Ruben sandwiches and coffee at a very nice little hamburger stand/cafe - which had the radio playing NPR! - and a great tour of the Steele County Museum - see below!

We are camping in the city park in Page (pop 225) - no water but we filled our bottles in the town cafe and the person in charge of the park is coming over to unlock the restrooms in the baseball field across the road - there's also water over there, so we're set. We're having fresh fruit, corn on the cob and cheese sandwiches for dinner - as is typical for us, we over-bought fresh food in Cooperstown when we had a layover day and a kitchen to cook in and now we need to eat it before it spoils!

We've had some trouble maintaining our Internet connection here, so are going to post now so you know where we are. We hope to be back later to tell you about the missile site and the Steele County Museum and to post a picture or two!
7/17/10: We're back!
Today's Photos: (1) The November 33 Minuteman Missile Site; (2) Mary Lou and Dorothy, volunteers at the Steele County Museum - see For Those Who Want More for additional details.

The November 33 Minuteman Missile Historical Site: This site made an extraordinary impression on Riley - strong feelings evoked by the reality before us, so different from the many PowerPoint classroom presentations he had made in his "Physics of Weapons and Arms Control" course. Not just the frightful prospect of the use of these weapons, but also just the enormity of the engineering and maintenance requirements to develop and maintain the site during the Cold War - pulling the huge missiles out periodically with monster cranes to truck them to a distant Air Force base for testing (or replacement), and all the auxiliary equipment to, for example, allow the massive concrete silo cover (which protected against incoming missiles) to be pushed aside almost instantaneously in case a launch was called for. All this multiplied by more than 1000 missile silos in North Dakota alone.

Steele County Museum: What a wonderful place in the little town of Hope, ND - the population of the entire county is 3000. Largely a volunteer effort, the museum has a main building, a schoolhouse, a church, a house which is being renovated & will be filled with pre-1940 items, a building for machinery which they built, a very old log home built by the first Norwegian settler, and perhaps other buildings which we can't remember. A few details:

You see why we had such a good time there!