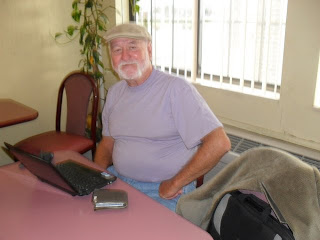 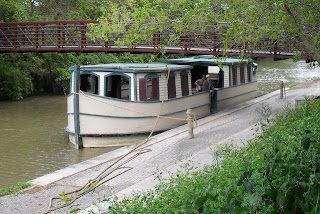 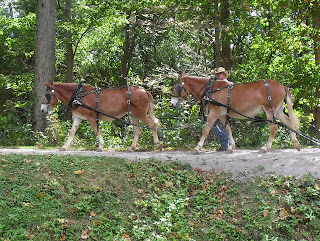 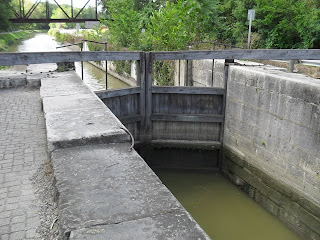 Just the Basics: 49 miles - bringing the week's total to 252! (6 riding days and one layover day). It's been a great day and included a ride in a canal boat pulled by two mules and a stop at a farm stand where we ate fresh peaches while we chatted with the farmers.

There has been a big change in the weather - albeit a temporary one. The high today was supposed to be only 70 and it was below 60 when we left Defiance this morning at about 8:45 a.m. It sprinkled a bit in the first hour or so and we were a bit chilly, and when we left our hotel in Bowling Green at 8 p.m. for dinner it was a bit chilly, and definitely chilly when we emerged from the restaurant after dinner. In a few days it's to be back in the 80s - but we feel the breath of fall. With luck, we have 6-7 more rideable weeks weather-wise, and about 1200 miles to go. Pretty tight . . . but not impossible on the face of it.

Today's Photos: (1) Dok Wingo (see below); (2) The Volunteer: The Canal Boat in Providence Metropark; (3) Molly and Sally, the canal boat mules; (4) Lock 44 - see below for the stories behind the pictures.

Meals: Motel breakfast - 'nuff said! Coffee and pastries at a nice coffee shop in Napoleon. Great lunch at La Roe's in Grand Rapids, OH - we split a Reuben with homemade potato chips and a lovely grilled chicken Caesar salad. Fresh peaches at a farm stand on Kellogg Road outside Grand Rapids - we ate 'em in their skins with paper towels supplied by the farm wife to catch the juice. Very nice Mexican dinner at El Cinco de Mayo Bar & Grill in Bowling Green, with a very welcome chance to speak Spanish with our waiter. Oh Henry candy bars eaten en route in the afternoon.

Encounters: "Dok" Wingo: At breakfast this morning we had a nice chat with "Dok" Wingo (pictured above). He's on a sort of cross country trip of his own - which started in TX. He's headed for MA, then possibly Canada and ultimately OR and CA. Conversation ranged from motel breakfasts to professions to the Vietnam war. Dok has a degree in philosophy and has taught horticulture and run a landscape design (??) business. He is retired and his card reads "I do nothing and I do it with unrelenting vigor. Free estimates. Reasonable prices considering the extreme quality rendered."

Other Encounters: We had a nice conversation with a cycling couple in Grand Rapids, OH - they told us about a trail in Missouri which they said is the longest rail trail there is - we plan to learn more about it. In the Providence Metropark we met a father-son duo doing a quick 3-day local bike tour - et cetera!

Canal Boat Ride: The Toledo area has a great regional park system - Metroparks. Today we visited the Providence Metropark just past Grand Rapids, OH. The park includes an operating mill - both a sawmill, which provides wood for park structures and furniture, and a flour mill which grinds wheat, corn and buckwheat for sale. The mill was also once used to produce electrical energy. There's also a general store and a canal boat ride! All the park staff are in costume as they might have looked around 1880, and in addition to operating the sawmill, flour mill and canal boat they make candles and demonstrate blacksmithing and tinsmithing.
The canal is a restored section of the original Miami and Erie Canal (not to be confused with the Erie Canal in NY). The restored canal runs for more than a mile and includes lock 44, one of the last functioning 19th century limestone locks. The original canal ran for 249 miles, between Toledo and Cincinnati. It ceased functioning in 1913. The Volunteer - the boat in which we rode - was built in in the 1990s and is a bit smaller than the original canal boats were; it is of a type in use in 1876, which is the period the historical renactors use for their roles.
We were told that at that time passage on the boat cost 3 cents a mile and included breakfast and dinner - as opposed to 16 cents a mile with no meals on the dangerous new-fangled railroad! Our two mules were named Molly and Sally; each of them weighed about 1400 lbs. We were told that pulling a canal boat is easier for mules than pulling a plow. Canal boat operators could earn additional income selling muskrat skins to the state for $10 - the meat they cooked and ate!
Our guide said that the State built canals to enhance commerce (better transportation than corduroy roads) and to make money - copying New York's success with The Erie Canal. However, the cost of creating and maintaining them eventually bankrupted the state - and of course competition from the railroads finished off the canals generally.
Posted by Riley and Becky at 4:32 PM