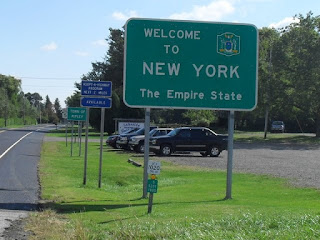 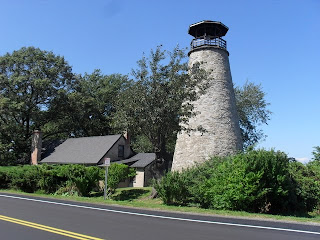 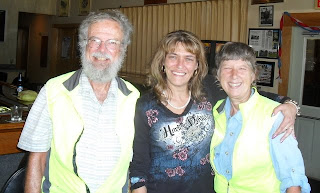 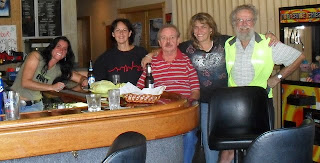 Just the Basics: 39 miles, almost all of them on NY State's wonderful roads. We reached NY this morning - our 13th state of the trip. Our Adventure Cycling map says: "Almost all of the state and U.S. highways and many county roads in New York have wide paved shoulders," something we also heard from a couple of cyclists we met in Erie, PA on Sunday. That was certainly true today - great shoulders, pleasant temperatures, and the wind at our backs. The riding was somewhat hilly but basically delightful. A few highlights:

Tomorrow: We go 37 miles to Hamburg, where we'll stay at the Comfort Inn.

Dawn Medley Buys Us a Beer: As we cycled into Dunkirk today we were going by the American Legion when a couple drove up on a motorcycle and the guy dropped the woman off out front. She saw us and called out to ask where we were going and started walking towards us. When she heard what we were doing she invited us in for a pop or a water. Once we were inside it developed that our hotel, the Clarion, was less than half a mile away so we agreed to having a beer, instead.

This was a real old-fashioned neighborhood bar - Velvet, the bartender, automatically brought Dawn her usual drink, and Dawn signed for her drink and our beers in an old-fashioned lined ledger! There were 3 women and two guys in the bar and from the conversation it was clear that the ladies were all friends - knew each other's birthdays and ages, even! Dawn is a photographer - with a day job working in the toll booth on New York's toll road - and three daughters in college or recently graduated.

We had a really good time visiting with folks and drinking the first beer anyone has bought us on this trip!

Nature Notes:
Grapes: As we wrote yesterday, this is a grape-growing area. They grow both wine and table grapes and in the farm stands we see white, red flame and Concords, but in the fields, mainly Concords. It is harvest time and the smell of grapes is so heavy on the air that we smell them as we cycle by! The roads are full of truckloads of grapes and there are trucks being loaded with giant boxes of grapes. Today we saw a mechanical harvester picking what must have been grapes for juice, jelly or wine. The machine drove down a row with a sort of comb that raked through the vines - the leaves seemed to stay on the vines but the grapes went up a conveyor belt and then came shooting out of a pipe grape-by-grape and poured down into a truck driving a row over at the same rate as the picker. It smelled heavenly!

Caterpillars: We have been meaning to mention caterpillars - if we already did, sorry! For months we've seen lots of the "woolly bear" type - about an inch long, brown, fat and furry. We also see some similar ones that are sort of a rusty orange. However, we occasionally see some that are about the same length but much thinner (albeit furry) and are a pleasing pastel yellow! The first couple that we saw we took for bits of fluff, not living creatures!

Cooler Temperatures: Yesterday we wore our jackets most of the morning - it was sprinkling from time to time but usually not enough to justify jackets - but it was cool enough that we wanted them on anyway! The next couple of days, at least, the highs will be in the 60s. Yikes!

Monarchs: Monarch butterflies are everywhere right now. Today we passed a large field of goldenrod just covered with them.