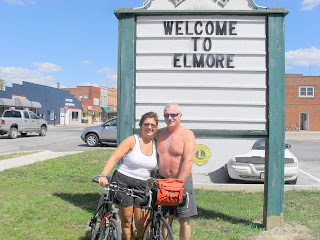 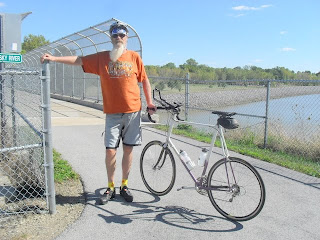 Just the Basics: 44 miles in lovely weather. Early in the day we had a fair amount of traffic and then a lot of twisty-turny riding on roads along rivers which required frequent stops.

We stopped at a roadside farm and bought honey crisp apples and had a nice chat with the farm family.

We reached Pemberville, the first town after Bowling Green on today's route. There began one of the wonderful adventures that this trip continues to offer us. We were pointed to a great new route by a non-biking couple in the restaurant where we stopped for a mid-morning snack, then met Mike and Melissa who personally guided us along the first 10 miles of that route. Shortly after, we met Dave Lindstrom, who took us the next 8 miles or so. See For Those Who Want More for the details!

Dave actually rode in the first cross-country bike trip organized by Bike Centennial in 1976 to celebrate the U.S. Centennial! Bike Centennial eventually became Adventure Cycling, the folks who made the maps we use on this trip!

At the end of our biking day we stopped at Hall's Farm Market - a sort of farm stand/gift shop/garden store across the street from our motel. We bought some leaf and pumpkin cookies (Yikes - more signs of fall!) and a little package of Hall's honey candy (good to suck on while biking). When the owner/cashier heard what we were doing he insisted on giving us each an apple, saying "Bless your hearts!"

Today's Photos: (1) Mike and Melissa, of Toledo and Pemberville; (2) Dave Lindstrom, of Fremont - see For Those Who Want More for details!

Tomorrow: We go to Vermillion, OH on Lake Erie, where we will stay in a housekeeping cabin on the Lake and probably cook our own dinner and breakfast. Arriving at Lake Erie feels like a major milestone, somehow.

Going Off-Route: In Pemberville (around Mile 12) we stopped at Janelle's Cafe for a snack - coffee and a shared bread pudding and cherry Danish. A couple breakfasting at the next table asked if we were biking, where to and from, et cetera. Turned out they lived in the little town of Elmore, about 10 miles away.

Our Adventure Cycling Bike map called for us to bike from Pemberville to Gibsonburg and then on to Fremont, where we could pick up the North Coast Inland Rail Trail for about 8 miles to Clyde, where we'd be spending the night. They were really enthusiastic about having us instead bike first to Woodville and then to Elmore, so that we could ride on Elmore's recently-completed rail trail to Fremont. They told us how to get there but we were dubious - the road they suggested was the curvy one we'd just left. Then we noticed a secondary road running parallel to that one - yes, they said, that worked too and would be curvy but very lightly traveled and very pretty.

We set out but were a bit uncertain about getting to the parallel road. We were biking across a bridge in search of it when Mike and Melissa rode up on their bikes. They were headed that way and would guide us, they said! We rode along together all the way to Elmore and had a wonderful time. The road was curvy and there was some traffic but it was absolutely beautiful - farmland to our right and the lovely winding Portage River to our left. Mike is an electrician and Melissa is a nurse. He has done a great deal of biking, she is an enthusiastic beginner. We talked about our lives, about biking, about our work, this trip, health care reform - it was great. We all stopped for lunch in Pemberville, then they headed home and we started on the bike trail to Fremont.

After a couple of miles we stopped to get our bearings - and couldn't seem to locate where we were on the maps in our Ohio atlas. Feeling vaguely uneasy, we continued on to Lindsay - where Dave Lindstrom saw us again looking at maps. When he heard we wanted to get to Fremont and then to a different section of trail he announced "I will be your guide." He had been heading the other direction but simply turned around and led us back to the end of that segment of trail in Fremont and then on a tricky route through Fremont to the next segment of bike trail which would take us on to Clyde.

En route we learned that he had lived in our own Orange County, CA for some years and was familiar with biking there. He also told us a bit about the original Bike Centennial bike ride across the country. Folks rode in groups, some from east to west and others from west to east. He was part of a group of about 15 riding the west-to-east route - the group included an 11 year old girl and her mom! He also said he'd attended a 25 year reunion of the group in Missoula, MT, where Bike Centennial/Adventure Cycling has its headquarters.

What a wonderful day!
Posted by Riley and Becky at 6:09 PM