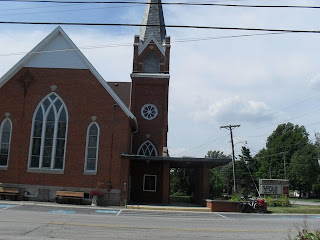 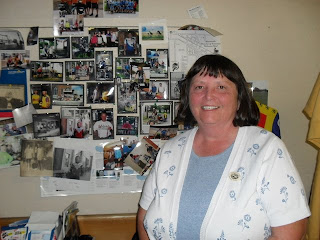 Just the Basics: Note, Later on 9/1/10: We have added more on Monroeville to the end of this post!

33 miles, all paved, very few hills and very little traffic most of the way. Probably we encountered the most traffic in Hoagland. The town is only a few blocks long but we were pulling out from our lunch stop just as school buses started rolling up to the school on the edge of town and we kept having to pull off the narrow 2-lane road to let them pass. We counted 11 in the elementary school parking lot as we passed it!

We gather that the local school board is going to be closing some schools in the area - the towns of Hoagland and Poe were full of signs about a meeting concerning school closures.

We had a picnic lunch today, sitting on a wall in front of a church - see For Those Who Want More for details.

Tonight we're staying in the Monroeville Community Center in the town park - see below for details!

Today's Photos: (1) The Antioch Lutheran Church in Hoagland, IN; (2) Lois Ternet, Editor of The Monroeville News.

Tomorrow: About 44 miles to Defiance, OH, where we will stay at a Super 8.

Picnicking at the Lutheran Church: We pulled into Hoagland but saw no sign of a park so Becky went into the Antioch Lutheran Church on the corner of Hoagland and Minnich to ask if there was a park in town. The pastor appeared and confirmed that there was, but that there was no place near it to get food. Becky told him we planned to picnic and he offered the church yard as an alternative spot, noting that it was much shadier. He also refilled our water bottles with cold water, let us use the restrooms, and sent us across to his own yard to a trashcan where we could put our trash - the church and the parsonage share a trash can.

We sat on a wall in front of the church and made and ate our peanut butter sandwiches on raisin bread, along with much of a local melon we bought in the morning in a convenience store in Markle, and some cookies and the church's cold water. As we were finishing, a man who had been attending Bible Study at the church came out to chat. He's also a cyclist and told us about a very nice trail in Fort Wayne and also knew all about where we are staying tonight - see below. Then the pastor reappeared and gave us a very nice little daily devotions magazine of the sort that has a Bible citation and a brief homily for each day - we read the one for today and liked it very much - the citation was Luke 14: 15-24 and verse 21 was quoted: "Bring in the poor, the crippled, the blind, and the lame."

Staying in Monroeville: Monroeville, a town of only about 1200 folks, does a wonderful thing for cyclists. Two Adventure Cycling Routes - the Northern Tier, which we are following, and the Great Lakes - go through here. The town has a nice little park and a very nice community center. Since 1975 or 1976, they have allowed cyclists (only) to stay inside the community center. There are bathrooms, a shower, a kitchen (with some basic utensils), and even a washer and dryer! There is no charge - although you can make a contribution.

They didn't start keeping records of visitors until sometime in the 90s, but since then at least 1300 cyclists have stayed here. They have had cyclists from all but 3 states, and from 16-17 foreign countries! Our map had a name and a phone number to call - we called and it was Warren, one of their park commissioners. He met us at a cemetery outside town and guided us here in his car, showed us around, and gave us a key, which we are to leave locked in the building when we leave.

Note: A quick look through the log suggests that Riley, at 70 is the second, oldest cyclist to come through (some don't state their ages, but most do) and only 7 listed are 63 or over - Becky's will be 64 next week!
More on Monroeville: Here is what we wrote in the guest book at the Community Center, slightly augmented:
We are utterly amazed - and delighted - by Monroeville! The fact that this wonderful community center has been available to cyclists for more than 30 years is incredible. That it has so many amenities - shower, restrooms, kitchen, air conditioning, laundry facilities, TV and even a radio/cd/tape player - is amazing.
The welcome we had from Warren of the Park Commission, Carla at the Post Office, Chis and Judy at the library, Lois at the paper and the folks at Whippy Dippy (ice cream) and The Pour House (finally, that martini!) has been wonderful. We were delighted to share the community center with the cheerful ladies of the home ec club - who arrived at 6 and are still cleaning up at 10! - and sorry we didn't get to the Historical Society meeting, to which Warren invited us. We can hardly wait to try the Irish Breakfast at the White Dove in the morning. Finally, we are about to listen to some classical music - something we have really missed on this trip - on a CD which we checked out from the public library on "the cyclists' library card."
We almost missed talking to Lois Ternet, editor of the Monroeville News. Warren, of the Park Commission, told us she'd be at the historical society meeting, but we missed that. We were at the library before dinner and came back later - Chris, the librarian, told us he'd let her know we were in town and she had probably gone to look for us at the Community Center - but we were trying to stay out of the way of the home ec club meeting, so if she went there, she missed us. He told us she has a "Cyclists Hall of Fame" on a wall in her office - she tries to photograph as many cyclists as she can. He suggested we drop by the office - which would probably be open even if she wasn't there - to see the photos. We did go by - she was there, and now our photo will join the others. One group was photographed on the steps of the Methodist Church and was huge. We asked where they stayed and were told that the Methodist and Lutheran Churches had both opened their doors to accommodate the overflow - what a town!

Nature Notes: We continue to ride past fields of corn and soybeans. Somewhat to our surprise, they vary quite a bit as far as how close they are to harvest. In most places the corn is in some stage of drying but many soybeans are still very green and lush. Today we biked in a spot with dry corn to the left and dry soybeans to the right. The wind was blowing and the two sides of the road rustled quite differently!
Posted by Riley and Becky at 2:01 PM