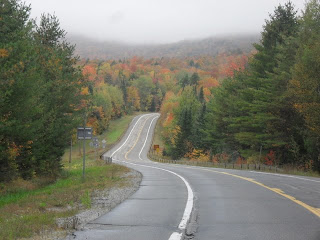 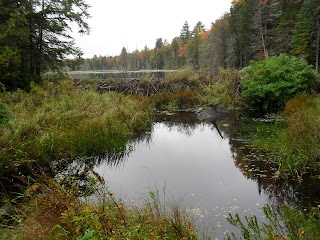 NOTE, 9/28/10: We arrived in Newcomb on Monday, 9/27/10, planning to also be there on Tuesday the 28th as a layover day, as lots of rain and thunderstorms were predicted for Tuesday. Once again we were unable to connect to the Internet and our cell phones don’t seem to work anywhere in the Adirondacks, so we were unable to post on our blog on the 27th.

As we always do on such occasions, we called Becky’s sister Sarah on our satellite phone so she could let family members know that we were safe and where we were.

Today we discovered that our hosts Doug and Maggie have wireless in their house - and they invited us to sit in their kitchen and use our computer there, so we are able to post after all.

They will be off on their own vacation later today, so we will not be able to post again until we arrive at Ticonderoga on the evening of Wednesday, 9/29.

Just the Basics: Monday, 9/27/10: Only 15 miles today – pretty hilly, as it turns out, although we had thought they wouldn’t be. We planned a short day today because it’s chilly and the roads are not only hilly but quite curvy and there was a good chance of rain in the p.m. and if we hadn’t stopped at the 15 mile point we’d have had to go 39 and climb 1130 feet and we weren’t sure we could beat the rain. This turns out to have been a good decision – it’s raining steadily as we type this up just after 3 p.m. on Monday. We are in a vacation-rental house at Aunt Polly’s B & B – the only place to stay in Newcomb. There’s supposed to be lots of rain and thunderstorms tomorrow so we will also take a layover day here tomorrow. It’s fun to be where we can cook.

There was far less traffic today than yesterday – we’re guessing a lot of yesterday’s traffic was folks heading home after drives out to see the fall colors or weekend holidays.

Today’s Photos: (1) Fall colors along the road from Long Lake to Newcomb; and (2) A Beaver Dam and Pond at Aunt Polly’s B & B, Newcomb, NY

Aunt Polly’s: Aunt Polly’s and its owners are a great example of the sort of way folks in rural areas cobble together a good living. The B & B is located on 75 acres and also has a single four-bedroom vacation rental. Many of their guests are hikers and bikers. They also have a stable and folks can hire wagon rides – we’re not sure what else is available there. The lady of the house also has a fabric store/quilting shop in the house and a small outbuilding labeled Aunt Polly’s Sweets apparently sells other local products – maple syrup and Balsam Bears are advertised on the sign. There are a couple of apple trees near the house and barn and we are hopefully watching for bear and deer to come by to eat apples – as they are reported to do. We are not sure of these details because our hosts are busy packing up their new RV, as early tomorrow morning they leave for a trip to see relatives in Iowa and Utah and so aren’t around to chat with as they might normally be.

Local Taxes – Local Perspectives: The combination of state and regional bed taxes equal more than 10% here – our hostess was not the first innkeeper who has apologized for this. She is particularly distressed by what we understand to be a 3% regional tax devoted to promoting tourism in the Adirondacks. She says the voters in Lake Placid outnumber the other Adirondack regions and they voted in the tax over objections in areas such as hers. We asked if they at least benefited from the investment – she said they did not but that right now this area was doing better than the more expensive resorts at Lake Placid.

Cooking: Breakfasts will be instant maple and brown sugar oatmeal with raisins and milk and possibly chopped apples, raisin toast, and coffee. Lunch both days: Hot dogs, B & M Baked Beans, B & M Brown Bread, and tea. Dinner both days: Grilled polenta and eggplant with Classico Four-Cheese Pasta Sauce, and veggies – Brussels sprouts one day and mashed yellow turnips (AKA rutabagas) the other. We also baked an apple pie and bought a can of Planter’s Mixed Nuts.
Luckily, there was some sugar in the kitchen - Becky had it on her shopping list but somehow neglected to buy any. We bummed some tapioca from our hostess for the pie – there was none at the store and it seemed ridiculous to buy 5 lbs of flour so as to get 2 tablespoons to thicken a pie. Luckily, there was also some cinnamon in the kitchen – after we shopped Becky discovered to her horror that her prized selection of spices had been sent back to Washington in the last frenzy of load-lightening! This means our Brussels sprouts will not be seasoned with olive oil and cumin seeds as planned – just olive oil!
Grocery Shopping: Grocery shopping in Newcomb was quite the adventure! There is a little campground store nearby, but on the advice of our hosts, we gratefully accepted the loan of their truck and drove 3 miles or so to the other store in town. It was fascinating. It was absolutely crammed with groceries, hardware, and sundries.
The storage of items reflected the complications of maintaining a diverse inventory in a small town with severe weather: Sacks of flour were in Ziploc bags (Mice? Bugs? Moisture?) Bags of beans were in the refrigerator case. There were a few Pillsbury refrigerated pie crusts in a fridge and a few more in a freezer. There were three different chest freezers with a surprising variety of frozen foods, including some of the health-food sort.
We were delighted to find B & M baked beans and brown bread, frozen Brussels sprouts and frozen rutabaga – something we had never seen before. We suspect these are all signs that we are getting close to New England! The store was really overflowing and paperwork and some items for sale were spread all over the checkout stand. We just set our selections on top of the stuff already there and were checked out.

The grocery store had no wine or beer but the bar in town sells 6 packs so we stopped there. When Becky went in she was greeted by a man sitting at the counter. She then stood there for a bit and finally asked if he was the proprietor or a customer. He hollered “Chrissy” into the back but no one appeared. He then asked what she wanted and went behind the counter to get the Labatt’s Blue she requested – pulling the bottles out 1 by 1 from the fridge, observing that he was checking to be sure none were Labatt’s Light, and setting them in a Heineken carton which he pulled out from under the bar.

At that point Chrissy appeared and took over the payment part of the transaction! Becky thanked her and noted that she had a great assistant – she grinned at him and said he was useful to have around.

We Visit A Beaver Dam: When he was showing us around, our host Doug gave Riley directions for a 15 minute hike to a beaver dam. We hiked over in the rain in the late afternoon, along trails beautifully decorated with fallen yellow and scarlet leaves. The dam was amazing – 60-70 feet in length and creating a huge pond about 8 feet above the level of the stream. The small amount of water escaping through the dam had a wonderfully musical sound. It is astounding that animals can create such a structure.
Posted by Riley and Becky at 8:32 AM