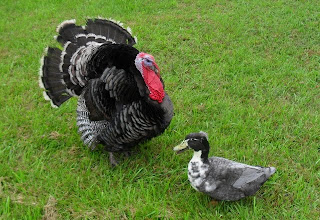 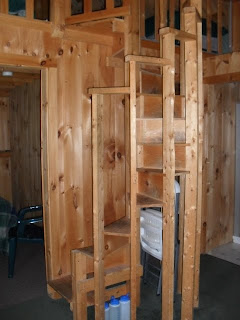 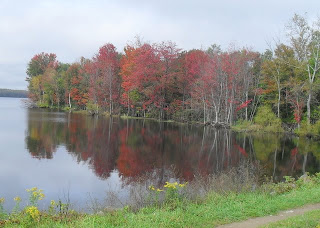 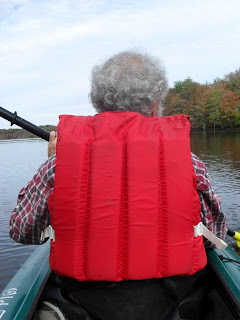 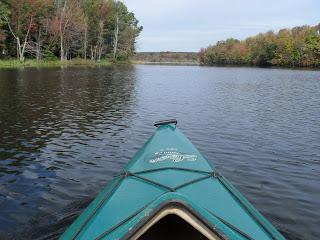 Just the Basics: Note, 9/24/10: As regular readers may be aware, we were unable to post on 9/22 & 23/10. Redfield, NY is one of the very few places where we have been unable to get an Internet connection with our Verizon Wireless. On such occasions we call Becky’s sister Sarah, who emails our kids and sibs to let them know where we are and that we’re OK – just unable to blog.

We did 21 hilly (> 800’ of climbing), and rainy-but-happy miles of biking on Wednesday, 9/22; and a layover day on Thursday, 9/23. We are staying in a wonderful cabin at the CrossRoads Inn and Cabins in the forest by the Salmon River Reservoir in the tiny town of Redfield, NY. We are within a stone’s throw of the area the state calls the Adirondacks Region. We are more than half-way across NY on the route which we are following!

It was supposed to rain around 1 p.m. on the 22nd, but when we got up in the morning at our motel in Pulaski it was already raining steadily and continued to do so while we had breakfast, packed up, and tried to decide whether to go on or to wait for Thursday, when rain was not forecast.

Around 10 we decided to go on if we could get lodging in Redfield, where we wanted to stop. We succeeded in getting a housekeeping cabin (our favorite type of lodging), pulled on coats and rain pants, and set out around 11. We wanted to do a bit of shopping, so it was actually noon when we started our ride.

It drizzled much of the day but was not particularly cold and we did lots of climbing, which warmed us up – we kept our rain pants on but soon doffed our jackets (too hot on the climbs) and rode in shirtsleeves. Sometimes we were rather wet, but then dried off – when we reached our cabin our shoes and socks were wet, but we were pretty dry.

There were lots of dump trucks on the road – we later learned that most of them were carrying sand being stockpiled by local villages for use on the roads this winter.

Our cabin has 2 bedrooms, a loft which sleeps three, a bathroom, and a small but complete kitchen. The interior is all wood and it is heated by a gas fireplace – very cozy. We have been having fun cooking – see For Those Who Want More - and Tonya offered us the use of their 2-man kayak so we also went kayaking on the Reservoir Thursday afternoon! = ) = )

Today’s Photos: (1) As we biked past a farm with numerous free-range chickens, we spotted this turkey and duck together; they seemed to be friends and we could swear the turkey was watching traffic as the duck wandered quite close to the road; (2) A very ingenious staircase in our cabin, designed and built by our host, Mitch Yerdon; (3) Salmon River Reservoir, Redfield, NY; (4) Riley paddling a kayak on the Salmon River Reservoir; and (5) Scene from the kayak.

Tomorrow: On Friday, 9/24/10 we intend to bike about 31 miles to Boonville, NY, where we will stay at the Hulbert House B & B. It will be another very hilly day – about 1000 feet of climbing. We did lots of climbing in the West but eastern roads tend to make fewer allowances for grade – they climb more quickly than many in the West.

The CrossRoads Inn & Cabins: The Inn, itself – which is also Mitch and Tonya’s home – is in a 200 year-old building which, beginning in 1904 was, for many years, a very exclusive men’s hunting and fishing club – members of the public not admitted! It eventually became an Inn, which Tonya and Mitch bought 14 years ago, just as the four cabins were being built – they finished that project. It is open year-round, as this is a major snowmobiling area in the winter, and a fishing and vacation destination in the other seasons. They are about to add a kayak rental business, as that sport has really been taking off in this area.

Meals – As Facilitated by Tonya Yerdon: We knew we were coming to a cabin with a kitchen. When Becky made the reservation she asked about grocery shopping and Tonya said there was a store about ½ a mile away and they were glad to loan their vehicle to cyclists who needed to shop! We stopped on our way through town but the store was really tiny – we bought beer and potato chips, a box of mac and cheese, a can of green beans, a jar of applesauce, 2 Svenhard’s Raisinettes, and 2 ice cream sundaes. We couldn’t even buy a small container of milk for the mac and cheese and for our instant oatmeal breakfast (we carry oatmeal). We weren’t sure we were staying another day and decided to wait before trying to figure out any meals for the following day – hoping there was actually another store nearby!

We arrived at the Inn and Tonya said there was no other store. We told her we might plan to stay another day but mentioned that the store had pretty slim pickings. She asked what we’d gotten – and then what we wished we had. We told her that we had been hoping for some meat and some fresh fruit and veggies but the store had none. She said she had recently had an event (they do lots of weddings and such) and had tons of leftover fresh green beans. She said they’d eaten beans four days in a row and would be happy to make us a gift of some – which we happily accepted. She also offered mashed potatoes but that didn’t sound like something to have with mac and cheese.

In a few minutes she showed up at our cabin with: The beans (enough for two dinners), four freshly-made chocolate chip peanut butter cookies, a cucumber and a tomato – and a pound of bacon which had been a gift from a group of Native Americans there for a ceremony of some kind – she said they traditionally give gifts of food and she already had lots of bacon!!

She also offered to do some shopping for us in Pulaski, where she planned to go in the morning. We brought a short shopping list to her in the morning, telling her we’d like to stay. She looked at the list and said she had everything on it in her kitchen! For $10 we walked out with: 3 BIG frozen pork chops from a pig they raised themselves (but had professionally butchered); a dozen eggs from a local farm; 4 red potatoes; 4 apples from one of Mitch’s Dad’s trees; and a bottle of Montezuma Cayuga White Wine from a winery in New York’s Finger Lakes wine region! In addition, she offered the use of their 2-person kayak and their washer and drier! You can see why we love it here!
Posted by Riley and Becky at 1:30 PM