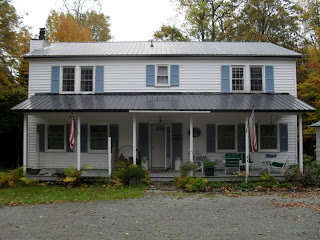 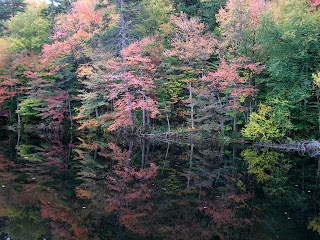 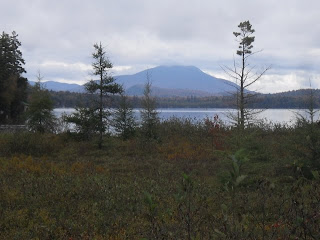 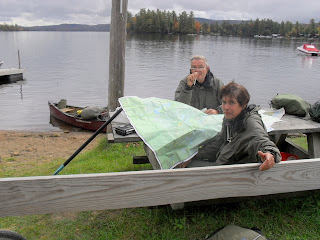 Just the Basics: 35 very hilly miles on a very busy road without much in the way of shoulders - but we pedaled along and enjoyed the fall colors just the same! Another good day. Tonight we are in Long Lake, NY, on the shores of - you guessed it - Long Lake! The motel has a nice sandy beach, boats for rent and Adirondack chairs to sit in - we went wading so that we could say we'd waded in a lake in the Adirondacks - pretty chilly, but refreshing. We could see the sunset over the lake from our motel room - glorious.

Tonight we are in the Shamrock Motel, which was built by an Irish immigrant in 1925 and is still in family hands. Our hostess, Beate Touchette drove us into town to the Adirondack Hotel where we had dinner - we walked back home, and enjoyed doing so, but it was great to have a lift into town! (Shamrock Motel, 1055 Deerland Road, Long Lake, NY 12847; http://www.shamrockmotellonglake.com/) Earlier today we met an older gentleman in Raquette Lake, NY - he and his wife are staying here tonight; when we mentioned this to Beate she immediately said his name and told us he's been coming here several times a year for more than 30 years!

We had a lovely dinner at the Adirondack Hotel - Riley's meal included fresh spinach, something we haven't seen in months - and our salads had radicchio, and Romaine ; ditto. = ) = ) We also had a nice talk with Pam, our very friendly and competent waitress.

Today's Photos: (1) The Cinnamon Bear B & B, where we spent Saturday night; (2) Fall colors; (3) Blue Mountain (we think!); and (4) Fred & Elizabeth Burt, "No-Paved Surface" Tourers, traveling by canoe, foot and mountain bike (see For Those Who Want More).

Tomorrow: We go less than 20 miles to Aunt Polly's B & B in Newcomb, NY. The short day is a function of weather and the availability of housing options - the weather is supposed to take a turn for the worse tomorrow afternoon, beginning with rain. Tuesday is supposed to have lots of rain and thunderstorms. We clearly want to take Tuesday off - we can't bike in these hills on these roads if it's raining hard - but might not be able to make it to the next available place in time - hence the short day tomorrow.

We aren't actually going to be in a B & B; turns out our hosts had planned a little getaway of their own - but they also rent a vacation home next to the B & B so are giving us that for the same price - and the loan of their truck to grocery shop so we can cook for ourselves instead - a good deal all around! There are no other places to stay there so we feel very lucky!

For Those Who Want More:
Breakfast at the Cinnamon Bear B & B, Inlet, NY: We had a lovely breakfast at the Cinnamon Bear, prepared by our host, Art Brockner: Fresh fruit compote; baked eggs with cheddar, beautifully toasted English muffins with strawberry preserves, bacon, coffee and OJ. The other guests were a family of three - charming 7 year old Emma and her parents (whose names we somehow missed), from Buffalo, who were hiking in the area this weekend.

Before we ate Art said grace - a lovely, eloquent prayer in which he asked God's protection for us as we ride and for the other family as they returned home by car. After breakfast we all helped clear the table and then Art hurried off to church.

Riley and I had our things all packed and quickly prepared to leave. We had hung our coats and reflective safety vests in the front hall when we came in from dinner the night before and forgot to get them when we went out front. We had to use our satellite phone outside to call the motel at which we wanted to stay tonight - our cell phones don't work in this area - so were out in the front yard doing that for a bit.

When we got ready to get on the bikes we realized we'd left the coats and vests inside and Becky started over to the house for them - to be met by Emma's dad who came hurrying out to get the car so he could drive off in search of us - they had just noticed the vests and jackets hanging in the hall! We meet such lovely people.

Fred & Elizabeth Burt, "No-Paved Surface" Tourers: We rode into the little town of Lake Raclette mid-morning, looking for a snack. Nothing seemed to be open so we stopped to ask a small group of folks by the water. They said the local restaurant would open at noon. Two of these folks were Fred and Elizabeth, who had just arrived by canoe. They are in our age range and hail from Newbury, VT. They have done lots of hiking and canoeing and biking - they once biked 1000 miles on the Continental Divide Mountain Bike Route - and are currently on a very interesting trip: They only want to travel on "unpaved surfaces." This means they hike, bike, or paddle!

They started on April 11th and have done some of each. We aren't sure if they have a destination in mind nor a time limit, but it sounded amazing. They also have a truck and have actually gone back and forth a bit while doing this - for example, they will end the canoe portion of the trip (for this year, anyway?) at Old Forge - not far from here - then rent a car, drive back to where they last left the truck and their bikes, go back for the canoe, and then continue by bike - at least that's what we think they said! This made our own adventure seem a little tame!
Posted by Riley and Becky at 6:32 PM