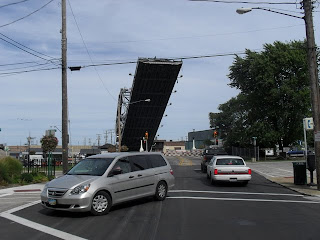 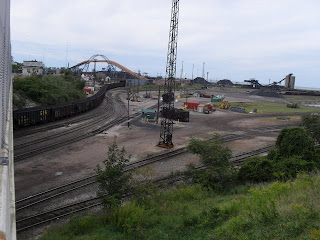 Just the Basics: Just 20 miles today - riding conditions similar to the challenging ones we've had for the last several days - windy, hilly roads with no shoulders and lots of traffic. In addition, there's a big gathering of Harley-Davidson riders in Geneva on the Lake, a town in this area, and there have been lots of them on the roads in the last couple of days. Nice folks, careful of cyclists, and, as we've noted in the past, folks with whom we have some things in common - we love the outdoors, love to tour, and love the freedom of our chosen ways of travel. Indeed, a case in point - we stopped by a road to let traffic pass and consult our maps and a motorcycle rider saw us, turned around and came back to see if we were OK - he was on a very elegant Honda. That said, Harleys are SO noisy, especially in large groups if you are riding a bike as they pass!

This was really less than a half a day of riding. We didn't leave Becky's cousins until late in the morning, having had a wonderful visit, and barely got our rental car back to Enterprise in Ashtabula before they closed at noon.

We then took off for Ashtabula's Hubbard House, a museum focused on the Underground Railway - William and Catherine Hubbard, its owners, built it to house their family and business, but also with hiding places for runaway slaves who then went on to freedom in nearby Canada, embarking from the Hubbard family's warehouses on Lake Erie and carried by sympathetic ship captains - a really inspiring place.
According to their website (hubbardhouseugrmuseum.org): "It may never be possible to know how many slaves William's family helped on to Canada, as no written account has been located to date. However, it is known from an eyewitness account, that, at one time, there were thirty-nine slaves in hiding, as the gentleman stated 'thirty-nine slaves made short work of a barrel of pickles.' Other observers made note of the fact that fugitive slaves arrived day and night, looking for William and Catherine's assistance and protection."

We then headed out of town around 2:30 p.m - only to be stopped by a raised drawbridge over the Ashtabula River, which we had to cross. We took a picture and then stopped at a coffee house to wait for the bridge to be lowered and enjoy coffee, and shared treats - a cranberry muffin and a Russian Tea Cake with apricots preserves and almonds. YUM!

Right after we crossed the bridge we passed an amazing coal-loading station involving boats, trains, heaps of coal, and a huge overhead conveyor system - we really wish we had seen it in action. We then biked along under the conditions noted above, arriving in Conneaut around 6, where we are settled into the Days Inn and have just had dinner. Now we need to use the computer to work out lodging and such for the next few days.

Today's Photos: (1) Open Drawbridge over the Ashtabula River; and (2) The Coal Transfer Station at the Ashtabula Harbor - note the heaps of coal, and the bridge-like coal conveyor system.

Tomorrow: We expect to go about 42 miles to the Lake View on the Lake Motel on Lake Erie, about 10 miles past Erie, PA, where we will stay in a little cabin with Adirondack chairs on the porch.
For Those Who Want More: That's it for today.
Posted by Riley and Becky at 4:30 PM