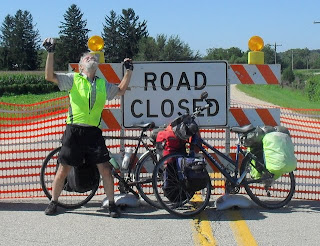 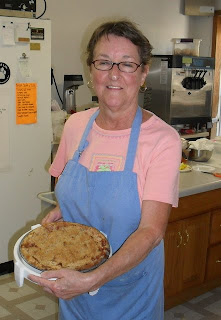 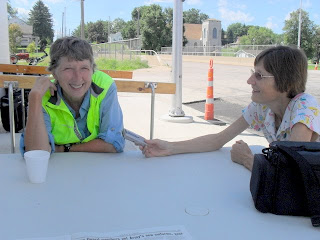 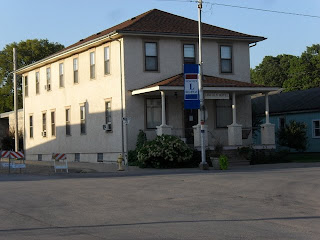 37 hilly miles - such a surprise! Another day with more reasonable temperatures and a mix of riding conditions. On the advice of Annette, our hostess at the wonderful Riverview Ridge Campground just south of Cascade, we headed out towards IA 136 on a couple of miles of rolling gravel road with a very rideable surface, thereby saving ourselves a more strenuous climb the way we had planned to go. Roads varied in the amount of traffic and the types of surface - really good, really bad, and scarified in preparation for resurfacing. Not a decent shoulder in the lot of them, but as always, we biked defensively and had an enjoyable day.

Tonight we are at a great place to stay - the Historic Lincoln Hotel B & B, Elizabeth Norton, Innkeeper (http://www.lincolnhoteliowa.com/), 408 Main, Lowden, IA 563-941-7563. We have cooking privileges in the B & B kitchen and, thankfully, were able to shop for the makings of an appropriate dinner to celebrate our 100th day on the road! We got into town right at 6 p.m. and in our experience, that's when many small town groceries close - but J & J Grocery (Lowdon's only grocery store) closes at 8 p.m. Whew! We had to go to the gas station to buy wine, but here's what we had:

In case you are wondering, we carry a little bottle of olive oil, salt and pepper, and the following spices: Cumin seeds, curry powder, cinnamon, garlic powder, and cayenne pepper flakes.

Now it's after 10 and we have another long day tomorrow, so we're going to sign off and will write up the rest of the day when we have a bit more time - you can check out the topics under For Those Who Want More.

Note on 8/20/10: We ate the leftover rice and beans and applesauce for breakfast and meant to eat the leftover Brussels sprouts as part of lunch but accidentally left them at the B & B.

Tomorrow: We go about 37 miles to Muscatine, IA, where we'll stay at a Super 8. Wednesday morning we'll cross the Mississippi River a final time for this trip and head into Illinois and our next Adventure Cycling Northern Tier Map, which will take us about 400 miles across Illinois and Indiana.

Today's Photos: (1) Riley pretends horror when confronted by a "We mean it!" road closure sign; (2) Jerilyn with one of her famous pies; (3) Becky being interviewed by Shirley Jones, Publisher of The Midland Times; and (4) The Historic Lincoln Hotel B and B, Lowdon, IA. See below for more details on all 4 photos!

Camping at the Riverview Ridge Campground in Cascade (Sunday night/Monday morning): The campground is located on a family farm where Annette (owners: Annette and John) grew up. They were living in town and pursuing careers when time came to sell the farm. Annette had farmer brothers but no one was in a position to buy and it was about to be sold outside the family when, as Annette tells it, her mom asked "one more time" if they didn't want to buy it - and, suddenly, they realized they did!

They sold their home, got the financing, and bought it from her mom. They rent the bulk of the land to another farmer, who raises corn and (we think) runs some stock there. John and Annette have always loved outdoor activities, always camped with their kids, and so on. So - over time they have developed part of the farm as a wonderful recreational area. John is in construction, so has done the building and can handle most of the maintenance; Annette is the day-to-day manager. They offer tubing and rafting on the Maquoketa River (no, we don't know how to pronounce it!); have RV and tent sites; and continue to develop hiking trails - the latest is for mountain bikes. Check it out at http://www.riverviewcampgrounds.com/

Annette's sister and her family were in the RV site next to where we camped. Before we turned in for the night Riley went over to ask her if animals getting into food were a problem and told her about our experience with raccoons and skunks getting into our food at Father Hennepin State Park. She told him they'd not heard of any problems (not much of an issue for RVers, anyway) - but in a few minutes brought over a big Rubbermaid-type tub with a tight lid, saying she wasn't using it at the moment and that we could put our food in it if we wanted to! We did, with many thanks!

The TRULY Closed Road: We have occasionally encountered closed road signs where we could actually get through, but as you can see from the picture, this sign looked like it meant business. While we hesitated, a truck came up and prepared to turn onto the detour and we succeeded in flagging it down. The truck driver assured us that, although cars could not get through, we could - and so it turned out. A dam in the area failed a couple of weeks ago and the flood that resulted really damaged the bridge and a road; it was mostly a matter of damaged road bed which would have been unsafe for cars but not a problem for us.

Riley was able to learn a bit more about this from a couple whose property the road came through . . . unfortunately, he had taken his helmet off as we waited at the blockade, trying to decide what to do - and neither of us noticed that he didn't have it until a mile or more later - at the top of a big hill, of course! So, we unloaded his bike and he wore Becky's helmet to bike back and look for it while Becky stayed with our stuff. In the course of the trip he encountered the couple looking at a section of the road which had been torn up by the river.

Jerilyn's Pie at the Bear Creek Cafe in Wyoming: As regular readers know, we are always on the lookout for pie - in Riley's case, particularly, especially for rhubarb pie. As a child, Riley once grew some rhubarb, and when he learned that you can propagate it by dividing and replanting the clumps - presumably forever - he had visions of becoming the Rhubarb King of America - even then he loved rhubarb pie! So, we stopped at the Bear Creek Cafe and had homemade pie - peach for Becky and rhubarb for Riley; he reports it was one of the two best he'd ever eaten - 10 on a scale of 1-10! The cafe is operated by sisters; Jerilyn (pictured) is the pie maker.

We Are Interviewed by the Midland Times (Shirley Jones: Publisher, Editor & Reporter): The Midland Times serves Jones County, the Midland School District, and the Cities of Wyoming, Oxford Junction, Olin and Onslow. While we were at the Bear Creek Cafe, Becky got to talking to the other of the two sisters who own the cafe; she was very interested in our trip. Later she came by the table and said she'd called her friend who published the local weekly - would we mind being interviewed? We agreed and Shirley Jones, the publisher/editor/reporter, soon showed up, camera and tape recorder in hand, to hear about our trip. Pretty interesting!

The Historic Lincoln Hotel B & B in Lowden, IA: The hotel was originally built to service the earliest cross-country auto travelers. As is so often the case, it ultimately fell into disrepair and the city eventually sought to raze it and use the site for a parking lot! It was rescued by Innkeeper Liz Norton and her attorney husband Tom. With the help of an architect friend who specializes in historic sites, and a ton of elbow grease, they have done an amazing restoration job and now operate a beautiful B & B in the hotel.

The Lincoln Highway: The hotel was built in the very early days of cross-country automobile travel. As we arrived in town we paused at roadside to consult our maps and written directions and a local man stopped his car to see if we needed help. He told us that we were, in fact, standing across from the B & B and to call Innkeeper Liz Norton and she'd come let us in! He also told us it was "the last still-operating old hotel on the Lincoln Highway." We had never heard of that highway, but then noticed there were Lincoln Highway banners along the road through town. Later we read an article about the hotel in the B & B's binder of information for guests.

Apparently, in 1912 a group of folks across the country formed a committee to advocate for creation of the first transcontinental highway (partially cobbled together from already extant routes), in time for the Pan-American Exhibition, to be held in San Francisco in 1915. At this time virtually all roads were local projects, unpaved, and rarely graded or even graveled. The route was completed on time, and runs from New York to San Francisco.

James Lin, who maintains a great Lincoln Highway website, writes that the Highway and the Association "played an important role in the Good Roads movement in the United States, paving the way for the development of a nationwide highway network that is now unsurpassed ." (http://lincolnhighway.jameslin.name/)

Also see the website of the Lincoln Highway Association at: http://www.lincolnhighwayassoc.org/ The Association presently focuses on maintaining the Highway in good condition and encouraging tourism on this wonderful historic route.