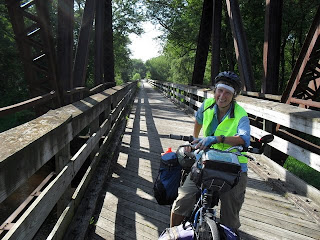 37 mostly good riding miles - some in town, some on freeway with wide shoulders, some on low-traffic rural roads, and much of it on an off-road bike trail, Wisconsin's Great River State Trail, some of which was gravel road, and some of which was crushed limestone on old roadbed. We spent most of the day along the Mississippi, in farmland, marshland, and meadows.

Health Report: If you read yesterday's blog, you know that Riley is coming down with a cold - no doubt Becky will be too - so we are trying to take good care of ourselves. We slept 11 hours last night and plan to take a layover day tomorrow - so we'll be back during the day to catch up a bit on our blogging. We've showered and been listening to James Taylor and Carole King on PBS and still need to have dinner - so we'll catch ya' tomorrow!

Today's Photo: Becky on a trestle bridge on the Great River State Trail somewhere between Trempeleau and Onalaska.

Tomorrow: We stay in La Crosse for a layover day.

The Mississippi and the Great River Road: The Mississippi river fully or partially drains the watersheds of 31 states, and travels through 10 of them. It is a major flyway for migratory birds - 40% of migrating birds in the U.S. follow it! As far back as 1937, folks began dreaming of a Great River Road running along the river from the headwaters at Lake Itaska to the Louisiana coast. That group of early dreamers became the Mississippi River Parkway Commission (MRPC) and the designated network of roads runs the full length of the river, for 2300 miles, including 69 different museums and interpretive centers. We have been riding on segments of this great network ever since Bemidji - a real journey through the heart of America.

La Crosse and Alcohol Over-Consumption - Some Sobering Thoughts: We had a sad, interesting conversation with a passer-by as we arrived in La Crosse. Becky was waiting by the bikes for Riley, who was getting directions to our motel from folks at a Walgreen's. The man was interested in our trip, and was from AZ - sadly, here to see someone in Hospice. He told us not to miss the downtown area - he described it as a sort of mini-New Orleans.

He then went on to say that he's been told that drinking is a huge problem in town - that the town has some astounding number of bars as compared to similarly-sized Iowa City, and that a local college (colleges?) actually sends a "drunk bus" around to pick up drunk students at night (not sure if this is every night, only on weekends, or possibly only during Oktoberfest). He said that 9 students had drowned in the Mississippi in recent years - basically walking in while very drunk - we later found an article on one such death in 2008. We can't confirm all that he said, of course, but we did learn that the city has a special commission studying problem drinking and an article about one of the deaths, so decided we would include this information.
Posted by Riley and Becky at 6:55 PM