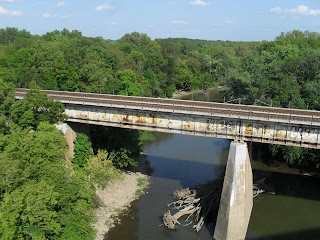 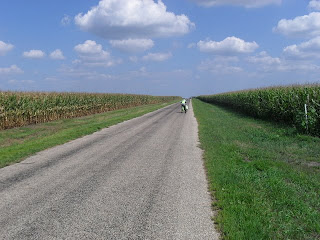 Just the Basics: 38 miles of mostly quiet rolling rural roads with some long flat stretches. Lots of corn and soybeans. Our day began in Washington, IL. At 8 a.m., Fred, of Central Illinois Taxi Company in East Peoria (309-839-2189) picked us up in a taxi van at our motel and drove us exactly back to where we had left off the day before when Riley's chain broke. We parked in Bob Schlosser's driveway, loaded up our bikes, and took up where we left off!

On the way we had a great time visiting with Fred. As a former Army Ranger he appreciates physical effort and so identified with what we're doing. He also spent 20 years living in Wales and that was neat to hear something about. As it so often has on this trip, our conversation ranged far and wide from current events to experiences in other parts of the world to matters of work and family. Much of the trip was along the mighty Illinois River, which made for great scenery. Fred told us that this area has been under cultivation for 300 years!

For lunch we picnicked in the very nice city park of the little town of Wenona (pop 1056), followed by a nap on the grass, and then went to their nice library to use the restrooms, get advice on the route, and sit and read magazines for a while.

Tomorrow: We go about 53 miles to The Greenhouse B & B near Kempton, IL, which specializes in meals prepared with home-grown organic foods. It is not near any restaurants, so we'll also be having Wed. dinner there - we are really looking forward to it.

Today's Photos: (1) Crossing the Vermillion River just before entering Streator Illinois. (2) Becky proceeding along a "cornidor"
For Those Who Want More: That's about it for today. 'Night!
Posted by Riley and Becky at 6:22 PM