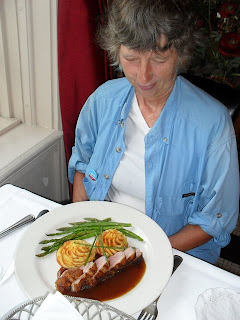 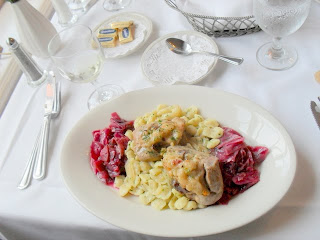 Note on 8/3/10: We have updated the post, as promised yesterday.

Just the Basics: Only 25 miles today. Our day began in St. Paul at the home of our friends Kathy and Guillermo and their daughter Sonia, where we spent Sunday night, 8/1/10. We then drove our rented car back to Forest Lake, where we had left our bikes on Friday morning, and continued our bike ride to Stillwater.

Tonight we are staying a the Lowell Inn, where we also had a wonderful dinner. Riley's family used to occasionally drive here from St. Paul for Sunday Brunch, so it is a very special treat for us to be here. It's been a really good day but we are beat and need to get to bed - we'll be back in a day or two with the following stories:

Tomorrow: We go about 48 miles to Red Wing, MN.

For Those Who Want More:
Homemade Apple Juice & So Much More: The day (8/2) was very hot and muggy. At the top of a hill outside Hugo we stopped in a driveway to look at maps - we were out in the country but there were houses here and there. As they will do, the resident dogs set up a mighty barking and their exasperated owner, Richard Houde, chased them down to get them back from the road. He asked if we needed help finding our way and we accepted. On thing led to another and we were soon seated on a patio in his freshly mowed, lovely big back yard, sipping ice water, followed by tall cold gasses of homemade apple juice - they have 15 apple trees on the property.

Turns out Richard is a high school teacher - history and photography and possibly something else we can't remember - but also a professional photographer. As you can imagine, there was plenty to discuss. Check out his website to see lovely nature pictures - and don't miss the picture of the lamp he made from rocks from Lake Superior (it's in the most popular pictures album) or those of hummingbirds in flight. We were enchanted by the rock lamps, which are a new project of his - he showed us one he was working on and then we saw one on his website - and the nature pictures are lovely. (Go to: http://www.cutterturner.com/) We proceeded on our way much refreshed and with our water bottles filled with ice from their fridge. = ) = )

The Lowell Inn: Built in the 1920s and operated for more than 50 years by the Palmer family, the Inn is a lovely, old-fashioned hotel. It eventually fell on hard times and went through an owner or two but has recently been lovingly refurbished and is a great place to stay, with the air of elegance it originally had, but at a very reasonable $79/night, M-TH in the summer - $75 in the winter, for a room with a double bed.

The restaurant is wonderful - we shared a bottle of wine and ate a long, leisurely meal: Shared shrimp cocktail; roasted beet salads; great bread; shared Creme Brulee; and delicious entrees - Riley had pork tenderloin stuffed with wild mushrooms and something else, along with red sweet cabbage and spaetzle; Becky had lovely, tender Duck a l'Orange with Duchess potatoes and asparagus - YUM! On Tuesday morning, we both had very good oatmeal and toast.

Ginny and Don: We saw Ginny and Don bike up to the Lowell Inn on loaded touring bikes as we were eating our salads. Becky went out to say Hi and they said they'd see us later in the dining room. By the time they got there we were ending our meal but had coffee with them while they had dinner. They are going faster than we are and have had some very different experiences.

Most notably, in Browning, MT, Ginny broke an ankle (and got a concussion and possibly other less serious injuries which we don't recall.) Her shoes had gotten quite muddy and got stuck in her bike clips and when she swerved to get off the road or something she found that she couldn't extricate her foot from the clip and ended up falling - with the injuries chronicled above. They took some time off and then she drove and Don rode until the 4 weeks she needed to heal properly were up. She's recently back on the bike and apparently proceeding no worse for wear - what an amazing story!

Our conversation last night was naturally focused on biking, but as has so often been the case with these sorts of meetings, we also talked about families, work, and the state of the world. We reflected on how wonderful most of the people we meet have been - their experiences were similar. Don put it perfectly when he said that his bottom line for the trip was that it was "reassuring" - and we knew exactly what he meant: By and large, people are honest, good, friendly, and well-intentioned. This country has its problems, but also many strengths. We may differ but we are also alike in so many ways. We will probably continue to muddle through!
Posted by Riley and Becky at 7:36 PM