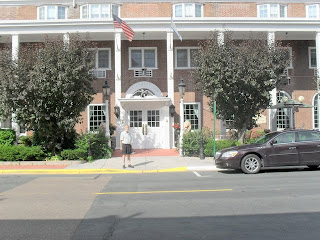 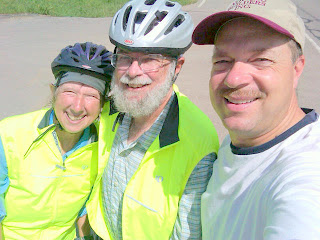 Just the Basics:
Riley: 31 miles; Becky: 6 miles. Yep - for the first time on this long journey, Becky accepted a ride for part of the day and Riley rode bravely on alone.

Here's what happened: We got a late start out of Stillwater this morning - about 10 a.m., we think. Right away there were 2 successive hills so steep that we walked our bikes - we swear the 1st one was more than a 30% grade! It was also HUGELY hot and muggy. We pressed on through hilly country, revising down our original plan to ride 48 miles to Red Wing, MN today.

Around mile 5 a fellow with a truck pulling a work trailer (about the size of a horse trailer but with no windows), who was pulled off to the side of the road ahead of us, signalled us to stop. It was Mark Arneson (see Hero of the Day, below) and he offered us a ride! He said that there were a great many hills ahead (we'd be crossing several rivers, each in its own valley) and it was so hot and muggy, that as a fellow biker he just thought we'd be miserable.

Riley, of course, is determined to ride every inch of the way, but he urged Becky to ride at least part of the way today with Mark. He pointed out that she and Mark could also carry 3 of his 4 panniers, leaving him with a much lighter load and the ability to ride more rapidly than would otherwise be possible - and so it was arranged. Mark took Becky about 25 biking miles to the public library in Prescott, WI, where he had some business, and Riley soldiered on, arriving at the library to join Becky at about 4 p.m.

Today's Photos: (1) Riley in front of the Lowell Inn in Stillwater; (2) Becky, Riley, and Mark Arneson - taken with Mark's cell phone and later emailed to Becky

Tomorrow: We plan to leave very early and bike about 24 miles to Red Wing, MN, with 755 feet of climbing. We may end our day there or go on 25 more miles to Lake City, MN, depending on the weather and how we are feeling.
We have now had a good look at our new map and this section is daunting - 400 some miles in muggy heat with lots of climbing. YIKES!!

For Those Who Want More:
Hero of the Day - Mark Arneson: Mark and a partner own Nordic Builders, Inc. in Hudson, WI - their specialty is fine woodwork - cabinets, stairs, and so on, which they remodel or build; they also do things like hanging doors and windows and building decks. He found himself with a little free time today and when he saw us biking along in all the heat, et cetera, decided he'd like to lend a hand.

Mark and his kids do some biking in this area - he suggested an ice cream shop to visit in the next town - and Mark himself has made a wonderful long bike trip of his own.

The summer after he graduated from high school, one of his older brothers invited him and his best friend to bike from WI to Jackson Hole, Wyoming, where he was living at the time. They made the trip out in 17 days and the return trip in something like 13 days - lots of 90 mile days and one that was over 100!

They camped in parks and on farms and in people's front yards, sometimes being invited in for dinner and/or breakfast and/or even to spend the night. While his friend hitch-hiked on to visit family in AZ, Mark visited with his brother and made a side-trip to Yellowstone National Park on his bike and then a 3 week bike trip to Glacier National Park - we had a great time talking about biking and simply being in that lovely place. Like us, he experienced lots of kindness from strangers - and like us, he had the time of his life. He said he was happy to offer us some help, as so many folks had helped him.
Riley's Adventures Biking Alone: A very beautiful but also quite hilly, hot, and humid ride. On the stretch before Becky got her ride Riley's bandanna fell out of his unzipped pocket and Becky rescued it - Riley then vowed that he would always keep his pocket zipped. About 3.5 miles after leaving Becky, Riley stopped to look at our map - and found it missing from his unzipped pocket. He then rode all 3.5 miles back before finding the map, at the point where Becky got her ride.
Another small problem: Riley neglected to pack sun screen when he took off alone. So he stopped at the one town along the way - the only likely purveyor of such stuff was a small spa. He asked if they had sun block - and they did, even in a small container! For $43.50. Uh, no thanks. Riley had a super lunch in that town - excellent barbecued spare ribs, a huge ear of corn on the cob, super potatoes, and cold slaw. Riley felt very guilty knowing that Becky was just having a peanut butter sandwich.
Our First Wisconsin Beer: We had intended to walk downtown from our motel for dinner - the only nearby option being a bar and grill and we are pretty tired of those. However, there was a torrential downpour just as we left so . . . Philander's Bar and Grill it was! (Philander Prescott was the town's founder, in case you're wondering about that name!) We had pizza and salad and drank our first WI beer - Rush River's Unforgiven, a dark beer. The Rush River Brewing Company is located in River Falls, WI and brews only unfiltered, unpasteurized beer for local consumption (has to be kept refrigerated). YUM!
Posted by Riley and Becky at 12:47 PM