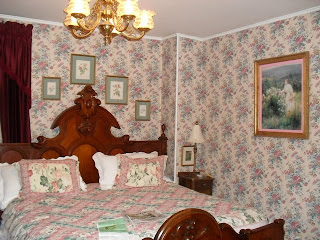 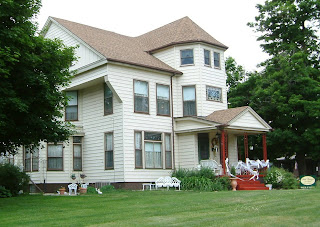 Thursday, 8/19/10: We had a good day and will be back tomorrow to tell you about it - we're in Kewanee at The Victorian Suite at Aunt Daisy's B & B, and will be staying here tomorrow for a layover day! 'Night!

Saturday, 8/21/10: Yikes! We couldn't find lodging for Saturday night in Henry, our next destination, so will stay here at Aunt Daisy's B & B in Kewanee, IL for one more day. The thought of another night camping in a hot, humid city park so soon was more than we were ready for! We love being here, so it's not hard to do - but it will be good to get underway again tomorrow. As we approach Mile 3000 (a goal we expect to reach this week) it begins to really seem possible that we'll make it to Bar Harbor unless winter sets in early, so we're anxious to start stacking up some miles! Note: We've added one more story to this entry - about Glen and Michele Schwarm, our hosts at Aunt Daisy's; see More on 34, at the end of For Those Who Want More!

8/20/10: We can't yet give you yesterday's mileage - our bikes are stored in the B & B's garage and we may not have a mileage update until we sit down to blog tomorrow night.

Today we are happily ensconced in our room at Aunt Daisy's listening to a thunderstorm and watching it pour outside (as predicted, that's one reason we are laying over today). We are in a very Victorian suite with it's own little sitting room and got back from doing some grocery shopping for dinner just as the rain got under way. We decided to dine in to avoid the possibility of having to go out in heavy rain. For our Friday night date we'll have crackers, cheese, wine from CA, apples, a tomato and chocolates. = ) = )

Should you ever be in this area, this is a wonderful place to stay! We actually sat at the breakfast table for 3 1/2 hours our first morning eating a lovely breakfast and chatting with Michele and Greg - we'll tell a couple of stories we heard from them below. If your travels require a short day in Chicago, this locale would work - the morning train to Chicago arrives there at 10 or so and there's an evening train back. Check out: Aunt Daisy's B & B at http://www.auntdaisys.net/, 223 W Central Blvd., Kewanee, IL 61443; 309-853-3300.

For Those Who Want More - Stories from Aunt Daisy's and Kewanee:

Midwestern Friendliness: We walked to the drugstore and the supermarket earlier this afternoon. By the standards of our bike route, Kewanee, with a population of about 12,500, is a big town, and we needed a bunch of harder-to-find items, such as special sunscreen for facial use. Recently Becky has found that typical sunscreens burn when she applies them to her face - perhaps some combination of salt from sweating and our constant use of sunscreen. We wish we'd been counting how many containers of sunscreen we have gone through - we're pretty sure it's surpassed the peanut butter count - of which we've lost track!

In any event, although we'd been given directions twice for getting from the drugstore to the market, we began to think we might have gone astray and asked a passerby for help. She showed us that we were on track after all - and then offered to drive us there, even though it was only a couple of blocks, but the rain was starting! We assured her that we were fine, but how thoughtful can you get? We should note that when we left the B & B our host Greg had strongly urged us to take his truck in case it rained!

Aunt Daisy's: The house was built by a brother and sister in the 1890s, and is a very well maintained huge Victorian. Neither of the two ever married nor had descendants, and the house was left to the Catholic Church and used as a rectory for the priests for many years. It had gone through a couple of short-term owners when the Schwarms bought it 13 years or so ago. They made extensive renovations and upgrades, but were able to retain lots of lovely original details. Since it was a rectory, many weddings were performed here over the years and the house has pictures of many of the couples married here, as well as a few marriage licenses from weddings performed here. Michele says that many people they know were married here.

The B & B is named for one of Michele's great aunts, who was a wonderful and much-beloved hostess. Michele says they didn't want to call it "Grandma's B &B," although that's the sort of atmosphere they hoped to evoke - because "You can never replace Grandma." However, the thought of visiting and being pampered by a great aunt sounded just right!

Kewanee's Colorful History: Kewanee was essentially a railroad town, although it also grew into a center of commerce for the whole county - at one time the town boasted Sears, Penney's, Montgomery Ward, 9 dress shops and four men's stores, et cetera. In the railroading heyday the area around the station was known as Whiskey Row (?) and boasted a bank where railroaders cashed their checks and a brothel around the corner and numerous saloons where they could then spend their money! The tellers' cage from that bank is now a part of a local pizza place. A local pub contains a huge bar built by the Pabst Blue Ribbon Brewery for the Chicago World Fair.
Local Farming:

Corn: Greg and Michele were able to answer some of the questions we've been accumulating about corn farming; here's a summary of what we remember:

Pigs: In case you didn't know - pig farms tend to smell like you might imagine. We have cycled by lots of them - recently Becky has been thinking that maybe she should give up bacon in the interests of the folks who have to work in such a bad-smelling environment! However, we recently noticed a couple of places where the pigs seem to live in big fields and each one has its own little shed - almost like the 3 Little Pigs - and these farms don't smell bad as we ride by! Per Greg, these are organic pig farms - presumably the pigs have to have a healthy environment as the farmers cannot rely on constant doses of antibiotics to keep the pigs from getting sick! Think about that when you buy pork.

More on 34: Glen Schwarm, our host, is the founder of an amazing local event - More On 34; this was its 5th year. The concept is simple and very clever: U.S. Highway 34 is a small, older U.S. highway running across much of Northern Illinois. On one weekend a year, a gigantic "garage sale" occurs in little towns and cities all along the road. This year's event was on Fathers' Day weekend and ran 140 miles, from Galesburg to Yorkville! In addition to showcasing traditional garage-sale items, More on 34 provides a wonderful outlet for local artists and crafts people, and an opportunity for churches, civic groups and non-profits to fundraise. Michele told us that the little town of Wyanet (? we think) sells burgers throughout the event and booth organizers told her this year that they raise enough money to pay for the town's annual civic festival. Michele said she had realized the event benefited many shoppers and sellers but the thought that it was also supporting the stuff of which memories are made - like a town's annual celebration - really moved her - as it did us!
Posted by Riley and Becky at 7:57 PM