Day 113, Rensselaer to Logansport, IN 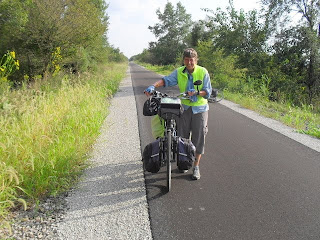 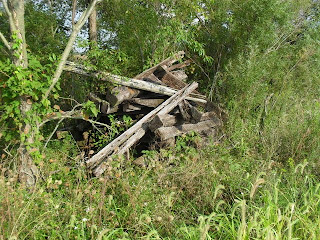 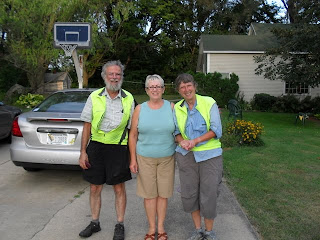 Just the Basics: 6:48 a.m., CDT: Hot Off the Presses - An Update for the Day: We are headed for a motel in Logansport tonight (about 55 miles), instead of about 55 miles to camping in Fletcher. Riley got to looking at maps and possible routes and the locations of motels and figured out that we could go to Logansport today and then Wabash or Huntington tomorrow and then back onto the main route at that point. Part of today's route will be guided by Google's bike route mapping feature. See ya' tonight!

10 p.m., EDT, Logansport: Turns out it was a 61 MILE DAY - our longest to date for this trip, as we recall! The day began with 3.25 miles of loose gravel - very tough riding, even for Riley at times; at one point we had to walk for some distance. After that, either pavement or McAdam for the rest of the day. = ) = )

It was pretty hot today. The high was supposed to be 92 but we saw a thermometer in Royal Center at 5:15 p.m. and it was still 93, so it was considerably hotter than 92 at the peak of the day, you can be sure! Much of the day there was also about a 10 mph south wind so whenever we turned south (regularly) we had to fight some wind. Mercifully, it died down as we did the last 15 miles or so. We are now in the Eastern Time Zone!

See For Those Who Want More for a quick overview - not surprisingly, we're pretty much ready to call it a day!

Today's Photos: (1) Becky cycles on the brand new rail trail between Royal Center and Logansport; (2) A pile of discarded ties along the trail; and (3) Penny Bannon, Riley and Becky, on the outskirts of Logansport (see below).

Tomorrow: About 35 miles to a motel in Wabash, IN - and it's supposed to be a bit cooler tomorrow.

For Those Who Want More: Here's the day in brief: