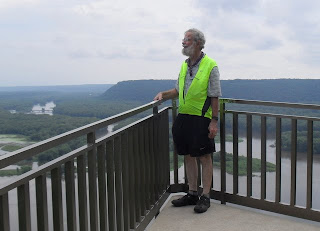 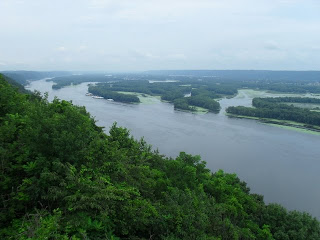 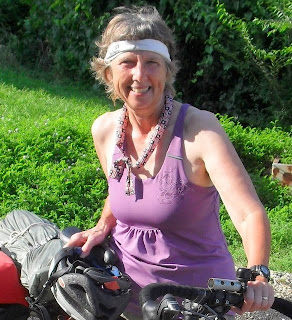 Only 21 miles today, but, once again: HOT, HILLY, & HUMID. It is SO hot and humid that we're needing to be very careful not to risk getting into heat-related health problems. So - we're reducing the number of miles traveled, drinking more water/tea/juice/etc. than we'd have believed possible, taking frequent "helmets off" breaks, and walking up steep hills - or portions thereof - which we'd normally ride up. Riley did a little mapping today and it looks like each of the past 3 days (including this one) have involved 1,000 feet or more of climbing and the heat index temperatures have been in the low 100s!!

Photos: (1) Riley in Pikes Peak State Park at the overlook above the confluence of the Mississippi and Wisconsin Rivers; (2) The Mississippi from the overlook; (3) Becky bringing Riley's bike into The Landing, our hotel.

Tomorrow: Unless the weather forecast improves, there is a good chance we'll lay over here in Gutenberg on Wednesday - hopefully in our wonderful room here at The Landing; we can't find out until morning if they have a spot for us tomorrow night.

For Those Who Want More:
Neck Coolers: Lots of cyclists stay at the Frontier Motel in Marquette and owners Todd and Sally keep a supply of neck coolers to give them! We had never heard of neck coolers, but you can see Becky's around her neck in one of today's photos. They are filled with some kind of bead which expands into some sort of jell when soaked in water. The idea is to soak 'em in cold water then tie one around your neck to help keep you cool. When we checked out in the morning Todd had ours cooled and waiting for us! They are supposed to be reusable - we hope so!

Blueberry Pancakes: We had breakfast in a small cafe before leaving Marquette. They offered orders of one or two blueberry pancakes - the waitress explained that they were dinner-plate size and we should just order one each - so we did. They were delicious - just loaded with blueberries - and we were hungry - we ended up splitting a 3rd one - YUM! The waitress also REALLY encouraged us to visit Pikes Peak State Park on the way to Gutenberg - as had Todd at the motel. We left thinking we'd see how we felt when we got there, but due to the heat we didn't think we'd make any side trips!

Pikes Peak State Park: Long story short - the park was supposed to be a mile off the road, but in the end we went - and it actually wasn't really a mile away and it wasn't very hilly getting to and from - and they were right - it WAS too good to miss! The park itself was lovely and shady and there is an overlook from which one can look across to Wisconsin and also down at the confluence of the Wisconsin and Mississippi Rivers. There were restrooms with flush toilets; we refilled our water bottles; we had bottles of cold iced tea; we loaned our tube of Afterbite to a young girl who'd gotten an itchy bite while visiting the park with her grandmas; and we had nice chats with two park volunteers, including Jim who had some route suggestions for us. A great side-trip!

Fruit Salad on the Hoof & Dinner in Gutenberg: There was no place to buy lunch but we found a place which had a pop machine and bought lemonade and sat on the grass and each ate a banana and an orange (fruit salad on the hoof) and some fig newtons and a package of those cheese crackers with a thin layer of cheese spread and were happy as clams.

The Gutenberg Welcome Center and the Mile Long Park: As we entered Gutenberg, an old river town founded by German immigrants, Becky spotted a Welcome Center and Riley suggested a stop. He was hoping to find a German restaurant - but, sadly, it turns out there aren't any. However, we did get advice for places to eat here, and for places to eat and stay in Dyersville (our next stop) and they told us a bit about the next section of our route and they gave us a bottle of cold water and we certainly felt welcomed!

A long park runs along the river side of town - grassy and shady and with many benches, picnic tables, and so on. It's built on a levee designed for flood control but it means the public gets long, uninterrupted access to the river, which is just delightful. There are also public restrooms and marinas and a good place to stand and watch river traffic come through the Lock - and there's an access ramp for soft-shelled turtles to come up when it's time to lay their eggs on a certain shady point!

The Landing Hotel: Our hotel is absolutely delightful! It is constructed inside an old button factory - button blanks for "pearl" buttons were stamped out of mussel shells and then sent downstream to Muscatine to be made into "pearl" buttons - Muscatine still makes such buttons today.

The building is a huge stone affair built in a German style. The owner is a carpenter who gutted the building and rebuilt it into a lovely hotel with a variety of rooms and suites, from our very nice but simple room in the basement next to the laundry room to two-story suites with balconies overlooking the river. It's been open for 10 years, so despite the modest price we paid ($59 + tax), they must be doing OK. The builder-owner's wife, meanwhile, runs the family farm - milking cows, the whole nine yards - 20 miles from town!
Posted by Riley and Becky at 7:43 PM