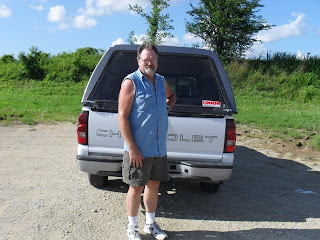 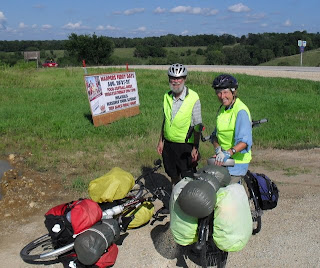 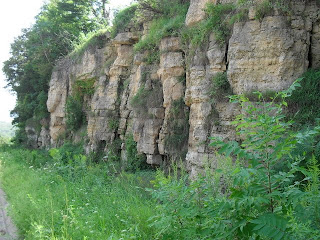 31 VERY HOT, HUMID and HILLY MILES, of which Riley rode all 31 and Becky rode 30 - she gratefully accepted a mid-afternoon lift up a 1 mile hill from a Good Samaritan named Tom - more on that later! A headline in today's Des Moines Register reads 'Brutal' weather transforms Iowa into giant sauna.

Despite all that, it was a good day and we are feeling cheerful. We're at the Frontier Motel in Marquette and are re-thinking how to get through the next few days, which are likely to be more of the same - hot, hilly and humid.

Tonight we walked a mile to the next little town - McGregor - and had great Mexican dinners (and Margaritas and a shared Tecate) and then walked the mile back (all very safely, wearing our reflective vests and, on the way back, our headlamps), and are about to hit the showers and then do some research and planning.

We'll get back to you later to let you know our plans!

Tomorrow (Tuesday, 8/10): We go to Gutenberg, IA, via 340 and X56, a continuation of The Great River Road which we have followed frequently - our hosts Todd and Sally and previous cyclists worked out a route between here and Dyersville that is shorter, less hilly (as we understand it), and on roads with better shoulders than the route on our maps! Stay tuned!

Today's Photos: (1) Tom, our Hero of the Day; (2) Riley and Becky, as taken by Tom; (3) A recent picture of a roadside bluff along The Great River Road.

Tom, our Hero of the Day: As we've mentioned, this a REALLY hilly area - much to our surprise (see The Driftless Area, below). Sometime after lunch we were toiling up yet another hill and Tom's white truck pulled off the road across the way and he signalled us to stop. He said the next mile was pretty much straight up and, given the high heat and humidity, he offered to drive us to the top. Riley continues to want to pedal every mile but he urged Becky to accept - and she did. Before they got the bike loaded, a second truck - this one black - pulled off ; the driver had just passed Riley who'd headed on up the hill, and had planned to make the same offer! He said he and his wife had given up Harleys for biking and he thought it was way too hot to be biking! What a delight to sit in an air conditioned truck for that hill!
Once they got to the top Tom proposed to sit in the truck and hear about our ride until Riley arrived - so he and Becky sat and talked. Tom is a recently retired carpenter who's returned to the family farm and is building himself a cabin there. He rents 1/2 the farm to a neighbor who grazes stock there; the rest is in Prairie Conservancy or the government land-bank program. He figures he'll have the roof on, the insulation in and the outer walls finished by winter, and then finish the inside during the winter. The cabin will have a great room, with lofts for sleeping, et cetera. It sounded wonderful. Turns out he has a close friend who is currently biking around the world for a year with his wife - whom he met on a trip to Antarctica! Small world. Oh - and his older brother was a physicist, like Riley, and another close friend works at Argonne National Laboratories near Chicago, building equipment for physicists!
The Driftless Area: According to our Adventure Cycling map for this area, we are riding through an area covering southeast MN, southwest WI, northwest Illinois, and northeast IA, which was somehow missed by the four major glacial periods. We would have thought that such an area might be flat - it wasn't messed up by glaciers, right? - but it turns out that's not so; it actually means that glaciers didn't sort of scrape down and level off the area! The hilly landforms we associate with glaciers - moraines, eskers and drumlins - are referred to as "drifts"; hence, areas like this, which lack those landforms - are "driftless," and, in this case at least, also very hilly!
Finding Lunch in Harpers Ferry, IA: This is a sort of typical story of finding places to eat in the very small towns which tend to lie on our route.
We pulled into Harpers Ferry (IA, not VA) around 1:40 p.m and stopped at a convenience store. The clerk was friendly and told us there was only one place in town still open for lunch and gave us directions. We also talked about the road and hills between us and Marquette (our destination for the night), chatted about our trip, et cetera.
We arrived at the cafe 5 minutes after they closed. Folks at the bar associated with the cafe suggested another place, several blocks away. We went - they, too, had closed at 2 p.m. We then headed back to the main road, but, for good measure, stopped at the remaining bar and grill, across from the mini-mart - we actually figured that the clerk would have suggested it if they were likely to be open - but Hooray! They were open. Riley had an excellent cheeseburger and Becky had an excellent patty melt and we had good, unsweetened iced tea and great fries. The bartender also filled our bike water bottles with ice and water.
Typical in many ways: (1) Most restaurants in such places are really bars and the food is likely to be fried; (2) Many restaurants have limited hours; (3) People are very nice about things like filling water bottles with ice.
Posted by Riley and Becky at 7:21 PM