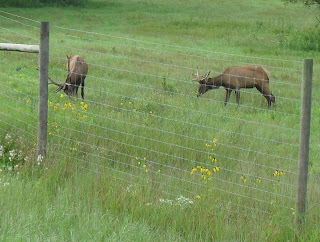 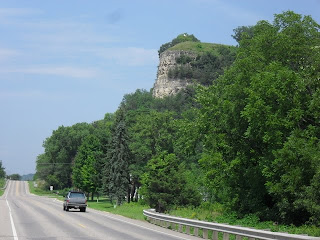 The countryside was beautiful - some of the time we were high up on bluffs, other times near the St. Croix and/or Mississippi Rivers, and always surrounded by verdant woodlands or farms, except for the small periods of time when we were in towns.
We are spending the night in Lake City on Lake Pepin - we think it is the lake that Laura Ingalls Wilder's family crossed before the ice broke up when they left the Little House in the Big Woods and began their journey across so much of the country!

We keep forgetting to mention that we are seeing lots of Queen Anne's Lace in recent days - we love their sort of frowzy, birds-nest-like buds. We're also seeing common milkweed, which is showing its wonderful, warty pods stuffed with seeds attached to their little gossamer parachutes.

Photos: (1) Two bucks we saw in a roadside meadow this morning; (2) A bluff high above the Mississippi River, as seen from the road.

Tomorrow: We will continue on U.S. 61 and hope to go 48 miles to Winona, MN, but may have to stop earlier at a campground 4 miles beyond Minnieska.

For Those Who Want More: We got up at 5:45 a.m. today and plan an equally early start tomorrow, so will have to finish this later - but here are the topics:

Prescott: Jim Baker, Freedom Park and the Mayor's Wife:
Jim Baker: As we biked away from the motel in Prescott we weren't very clear on the best route for getting out of town. We stopped at an intersection to consult our map and up walked Jim Baker to give advice - he is a post-by-pass patient and walks every morning and soon had us routed in a way to avoid going DOWN a big hill into town and then back UP - which is what we very well might have done. He also virtually insisted that we stop at Freedom Park on our way out of town - so we did, and were we glad!
Freedom Park and the Great River Road Visitor and Learning Center: Freedom Park dates back to 1928 and was originally named Prescott Park. Its 3 acres are perched on a bluff high above the Mississippi, just above its confluence with the St. Croix River. The interpretive center was built recently and the park is absolutely beautiful. The Center is in a beautiful building, there are lovely paths with great interpretive signs, a picnic shelter and a playground. There is also a beautiful butterfly garden with a lovely sculpture reminiscent of the work of Gaudi but done by a local artist and local children.
In the 1980s the park was re-named in honor of Freedom, a female bald eagle who was released there. She had been shot and was nursed back to health at the U of MN's Raptor Center. She served as a symbol of freedom at a ceremony in Washington, DC, honoring America's POWs and attended by the recently-released American hostages who had been captive in Iran. She was released to freedom from Freedom Park on February 27, 1981 - a lovely story.
The Mayor's Wife: We met the mayor's wife as we visited the park - she was walking their dog. We talked a bit about the area and she took us to a place where she thought we'd be able to see the clear water of the St. Croix River mixing with the muddy water of the Mississippi - but the light wasn't right. She is a 3rd grade teacher and brings her class to the Center for a field trip each year - students in some grades come numerous times for on-going educational units. She also told us that the previous night she'd driven out of town to a local farm which has a wood-fired oven and sells wonderful pizza only on Tuesdays! If you want to eat it there, you can - but you have to bring your own chairs, beverages, and plates/napkins/et cetera!

The Oasis Eatery and Nesbitt's Nursery: We had thought there would be no place to eat between Prescott and Red Wing and Becky had secretly bought Hostess Cherry Pies to encourage us when we took a break somewhere along the road - the riding from Prescott to Red Wing had the 2 biggest climbs of the day.
However, not long after our Hostess pie break we came upon the Oasis Eatery at Nesbitt's Nursery. Oh, my! We had wonderful coffee and shared a delicious veggie quiche and wonderful apple pie with Izzy's vanilla ice cream (not related to Izzy's soda - Izzy's ice cream is from St. Paul). The restaurant is the latest addition to the business, we think; right now it is only open for breakfast and lunch.
There is a working apple orchard, which also produces and sells apple cider, and a nursery with a variety of locally-grown landscaping plants and trees - they particularly specialize in spruce and another conifer - we forget which. They have a neat gift shop mainly stocked with local products. The coffee is fair-trade, organic, shade-grown in Brazil and locally roasted by a son of the growers who, himself, lives in MN. They farm sustainably and buy locally. The things that aren't local are wonderful for other reasons - such as multi-cultural alphabet posters in the gift shop from the Syracuse Cultural Workers. Nesbitt's is family owned and started in 1995 - it was great to be there and to spend time talking to Leah Nesbitt-Miller, one of the owners. They also offer "seasonal rural experiences" - a spruce maze, a pumpkin patch, and so on. They do all their own baking . . . we could go on and on! Check out their website @ http://www.nesbittsnursery.com/
Meals: This has been a good eating day - which really helped power us through some tough riding! Breakfast: We planned an early departure to beat the heat and humidity but it appeared no restaurants were open before 7, so Becky went to the gas station/convenience store by the motel and we managed a decent breakfast: Hard boiled eggs, fresh grapes, a shared ham sandwich and coffee - not bad at all! First Lunch: See The Oasis, above! Second Lunch: We ate in a downtown restaurant in the basement of a big office building in Red Wing, MN (yep - home of Red Wing Shoes). We had WONDERFUL fried chicken, baked potatoes and salad. Dinner: We ate in a restaurant on Lake Pepin, across from our motel. We sat overlooking the lake and thoroughly enjoyed our dinners - Riley had lasagna and Becky had 3-cheese ravioli and we both had salad and a nice red wine - a lovely ending to a tough day.
Posted by Riley and Becky at 7:18 PM