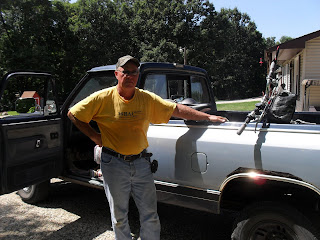 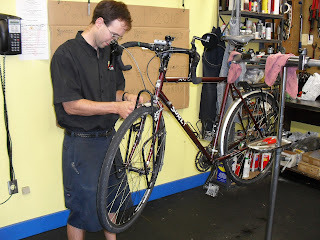 Just the Basics: Only about 6 miles of cycling! Today Riley's chain broke about 5 miles out of Henry, IL, where we spent last night.

Amazingly, we broke down right by the house of an incredibly kind person - Bob Schlosser (see Hero of the Day, below). He loaned us tools and even cannibalized a bike to see if Riley could use its chain, and ultimately drove us 40 some miles (!) to the nearest bike store - Russell's Cycling and Fitness in Washington, IL, where we are now getting tune-ups, a new chain and gears for Riley, new brakes for Becky, and a chain tool (see Russell's below). YIKES!!

We will spend the night here and as Becky types Riley is making a cab reservation for early tomorrow morning with a company in near-by Preoria, IL (no cabs here in Washington) to get us back to where we left off so we can continue the journey.

Tomorrow: We take a cab back to where we left off and start again for Streator, IL.

Bob Schlosser, our Hero of the Day: Bob's home is located at the top of a steep hill not far from Henry, IL. Riley's chain broke just as we were passing his yard. We got off the bikes and Riley started work to see what might be done. We had not chosen to carry a spare chain and Riley had been so dissatisfied with the chain tool he had that he had discarded it - although the chain was pretty much beyond repair anyway, as it happens.

Bob soon appeared with an offer of help. First he loaned Riley some tools - and suggested that Becky move into the shade in his yard to continue writing the postcards she was working on. Then he began helping Riley. He even cannibalized an old bike he had to see if its chain could be made to work on Riley's bike. When all else failed he helped us locate the closest bike shop - Russell's in Washington, with which he had some familiarity - and drove us some 40 miles there and insisted on giving us 2 bottles of very welcome cold Gatorade. He refused payment - we promised to pass the favor on!

On our way to Washington we talked about farming and the economy and the loss of retail businesses in small towns. Bob's family recently sold the family farm but he and his wife have 15 acres of the farmstead and he has devoted a lot of time this summer to working on it - among other things, building fences; they may decide to build a house and live there and he wants to be able to keep some stock. He told us that small farmers seldom have stock anymore - to the extent that there are small farmers - that it used to be that if your stock got out they'd likely just end up at the next farm over, but with today's huge farms with thousands of unfenced acres of corn or soybeans your stock could run for many miles - so he's building strong fences!

Russell's Cycling and Fitness Center: Russell's is located at 10 Valley Forge Avenue, Washington, IL 61571, 309-444-2098, http://www.russellsfitness.com/ If you ever need a bike shop in North Central IL, Russell's is your place.

Riley had called ahead to ask if they would have the needed parts - they did. We no sooner arrived at the door than Buyer/Fit Specialist Bernie Camp was at the door, holding it open for our bikes and welcoming us with some comment such as "Well - you made it!" Soon Janice, another staffer, came up to Becky saying "You're the cyclists we've heard about!" Soon she was offering to take us to Preoria when she got off her shift, if that would help!

When their tech John was working on Riley's bike he found a problem he wanted to bring to our attention - and came to the coffee house next door to find us. And so it went - great people, great work. Our bikes now have clean chains (new in Riley's case), with freshly inflated and balanced tires. Riley's handlebar light was replaced. They noticed that Becky's hand grips had been slipping off - now they aren't. Becky has a brand new complimentary water bottle - and so it goes. WOW!

So - How Much Weight Are You Carrying? We get this question from time to time, and until recently have answered that we didn't know. However, a couple of days ago our hosts at Aunt Daisy's B & B in Kewanee, IL loaned us a bathroom scale and we finally weighed our stuff. Riley: About 70 pounds; Becky: About 45 pounds. Yikes!

So, this morning while we were still in Henry, IL, we made some changes!
1. We ate our can of peaches as part of our breakfast.

2. We left 3 cans (chili, bean with bacon soup & green beans) with the motel folks who said they'd find a home for them.

3. We discarded about 8 oz of saline solution which we'd already discovered was no good, and threw away a couple of pairs of pretty worn out winter gloves; and

4. We shipped about 13 1/2 pounds of stuff to our friend Barb in Richland!

(a) One box contains things we're finished with - maps we've used, a couple of wildflower books, some clothes we decided we can do with out, etc.

(b) The other box contains cold weather gear which we will probably need - at some point Barb will send it back to us via general delivery to a post office which we'll pick when the time comes (Thank you Barb!). We kept some warm stuff to use between the time it starts getting cooler and the time we'd get the other stuff back. WHEW!
Posted by Riley and Becky at 1:25 PM