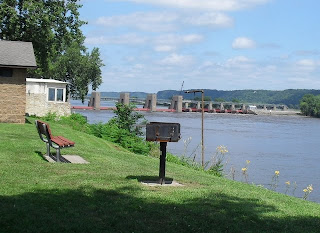 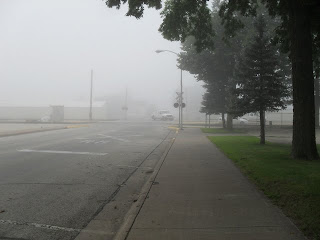 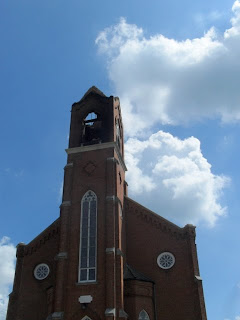 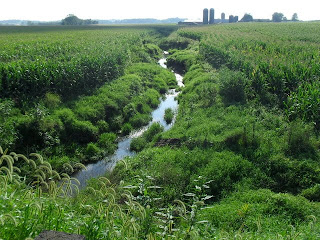 Just the Basics: 25 HOT HUMID HILLY miles - and if you think you're tired of reading that phrase, think of how we must feel! Some stats:


Today's Photos:
1) Lock 10 on the Mississippi, viewed in Gutenburg on our Wednesday layover day.
2) Fog that greeted us when we got up Thursday intending an early start.
3) The steeple in Luxemburg which burned when struck by lightening this week.
4) "Muskrat(?)" Creek

Tomorrow: The weather forecast is for more of the same, but it is supposed to start to cool off on the weekend - so, we will have a layover day again tomorrow - it seems unwise to keep beating our heads against this particular wall!

Mark Twain: As regular readers know, we like to read locally appropriate books as we go along. Don't know if we've mentioned it before, but when we were in the Big Woods in MN we downloaded a free book of Paul Bunyan stories to our Kindle, and read some aloud - especially at bedtimes. Now that we're spending time along the Mississippi, we've done the same with Mark Twain's Life on the Mississippi - big fun!

Lightning Strikes a Steeple in Luxemburg: As we were FINALLY leaving the hotel this morning we chatted a bit with another guest. He told us that a church steeple in Luxemburg had been struck by lightning on Monday night and had burned. Turns out it was across from the place where we had lunch today so we not only saw it but got a play-by-play from the restaurant owner and a couple of patrons at the bar.

Animals: We watched some little muskrat-sort of creature swimming up a narrow creek as we rested along our bike ride today. And just now in our motel room Becky spotted a very small frog! which we captured in a cup for Becky to take outside to release (after showing it to the desk clerk).